Though we didn’t actually eat literal blockchain — is that even possible? — the digital ledger technology was a central part of the unique meal.

IBM on Monday at CES announced a new consumer mobile app called “Thank My Farmer” that uses the IBM Blockchain to trace where coffee comes from and connects drinkers with farmers, traders, roasters, and brands.

IBM’s blockchain tech also powers the IBM Food Trust, a system that digitizes transactions across food supply chains and increases transparency to what people are eating. The idea is to ensure food safety and sustainability; reduce food fraud; and minimize food waste, among other goals.

The main ingredient in each dish served at the dinner was sourced from foods traced by the IBM Food Trust.

“In the future we believe that everything you get will be certified on a blockchain,” said Bob Lord, a senior vice president at IBM and former CEO at AOL. “It will be sustainable, it will be certified — you will be secure in what you’re eating. Tonight you will be sampling that — instead of me talking about it, you will experience food on the IBM Blockchain.”

IBM's dinner with chef @AaronSanchez was the perfect way to start #CES2020. He prepared a fantastic meal with ingredients tracked with @IBM's blockchain capabilities. Thank you Aaron! pic.twitter.com/vnGwZKN18Q

Sanchez, who starred on Food Network’s Chopped and is a judge on FOX’s Masterchef, learned about blockchain about a year-and-a-half ago. He became interested in how blockchain can help quickly and easily track and identify ingredients, all the way from the farm to table.

“As a chef for so many years, I’ve cooked with what I’d call nameless ingredients,” said Sanchez, who just debuted a new book. “Now we have an incredible source that allows us to not only own the flavors but to own the ingredients. That’s something really remarkable.” 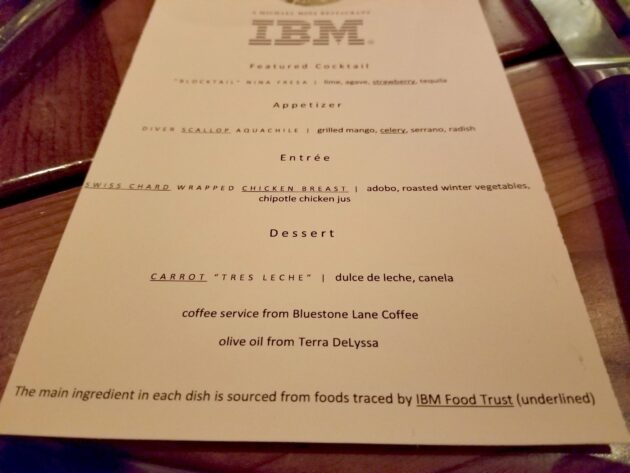 Sanchez said blockchain tech lets chefs be more resourceful and increase their connection to farmers. “We give them the biggest sense of honor by cooking with their product,” he said.

IBM is working with companies such as Walmart and Nestle on blockchain-related applications for food supply chains. Update, Jan. 14: IBM inked a blockchain deal with olive oil producer CHO.

Starbucks and Microsoft are partnering on a similar bean-to-cup program.

It was cool to learn how a chef like Sanchez is using blockchain. I found it especially interesting to hear him note which ingredients were on the blockchain, in between his artistic descriptions of each dish.

“I think it’s really going to not only be a game changer now, but in the future,” Sanchez said of blockchain. “I’m excited about this. It’s a beautiful marriage between the traditions of cooking and with technology.”