LAS VEGAS — The first ever electric bicycle with Amazon’s digital assistant built in made its public debut at CES this week.

The highly anticipated Cybic E-Legend bike includes a SIM card, so cyclists will not need Wi-Fi to use Alexa functions, send messages and make calls.

“It’s a hands-free operation, so you don’t have to stop the bike to take your phone out,” said David Kumar, product manager at Alexa Voice Service. “You can forward your phone number to the SIM card, so you don’t really even need to carry your phone.”

?This is the world's first electric bicycle with @amazon Alexa built in: pic.twitter.com/cev5msNKuz

The Alexa-enabled e-bike is not yet  available for purchase in the U.S. Kumar said the plan is to launch it around May in the United Kingdom. The U.S. launch could happen later in the year. 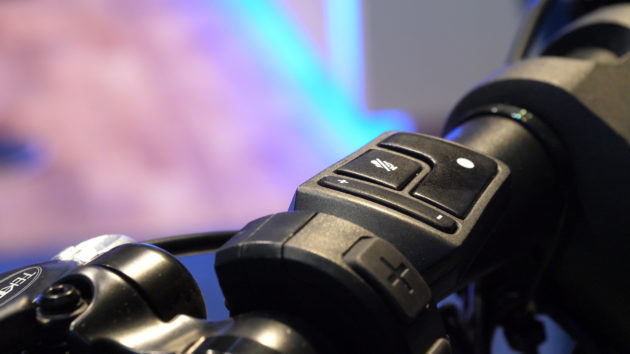 One feature that makes the e-bike unique from other Alexa devices is the ability to set calorie goals.

For instance, Kumar said, a user could say, “I want to burn 100 calories.” Then, Alexa would ask for their body weight and map a route for them accordingly. Kumar said the new e-bike could also track the distance a bicyclist has traveled and estimate the amount of time it will take to get back home.

“Of course, and most importantly, you can ask, ‘Where is the nearest Starbucks?’ and it will tell you where it is and route you there,” Kumar said.

In its default mode, the e-bike’s screen will display speed, elevation and remaining battery power. Smart LED lane lighting allows the bike to project a beam on its sides, so that others know not to get too close at night. Other features of the bike include a built-in headlight, a built-in speaker, tire pressure sensors, a Wi-Fi hotspot and turn signals.