Valve Software’s Half-Life: Alyx was officially unveiled Thursday morning. It’s the first Half-Life game since 2007 (not counting fan-made drama bombs like Hunt Down the Freeman), and is a prequel set between the ending of Half-Life and the beginning of Half-Life 2, while Gordon Freeman is out of commission.

Following the events at Black Mesa in the original Half-Life, Earth was noticed, explored, and rapidly conquered by an interdimensional organization called the Combine. In the next two decades, the Combine has slung the surviving human population into newly-built prison cities, among whom are Alyx and her father, Eli Vance. Here, as Alyx, you take the first steps towards establishing a resistance movement against the Combine.

Alyx is “built from the ground up” for virtual reality, around environmental interactions like quickly searching through shelves or using narrow holes in walls to make shots that would be impossible in a typical first-person view. Your character wears a rig on her hands, the “Gravity Gloves,” a precursor to HL2’s gravity gun. This allows you to grab objects from a distance and manipulate them, or bring them within your reach.

According to Valve’s David Speyrer, speaking with the Verge, Alyx is not a tech demo or a side story. It’s considered by Valve to be the next chapter in the Half-Life series, and will take about as long for a player to complete as Half-Life 2 did.

Speyrer also says that it’s a good idea for players to go back through 2007’s Half-Life: Episode Two before diving into Alyx, for ominous plot-related reasons. The trailer does end with a creepy shot of the new, current-generation look for Half-Life’s infamous G-Man, the time- and space-defying conspiracist. 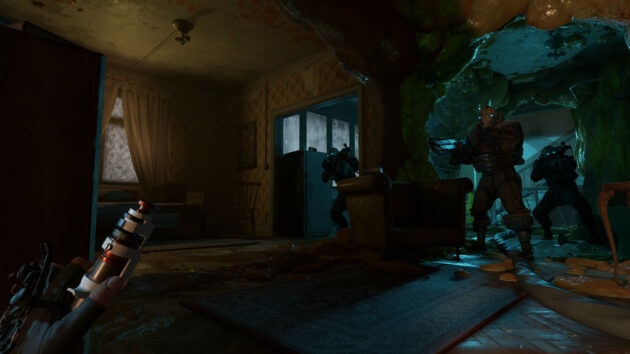 Alyx will ship with a set of Source 2 tools updated for virtual reality, enabling the mod community to crack into the environments on day one. The Valve Hammer Editor has already been updated with Alyx’s VR-specific components. I’d imagine this is low-key the real story of Alyx, as Half-Life has traditionally been as much about its conversions and fan content as the game itself, like how Counter-Strike began as a Half-Life mod; this could theoretically spawn a new generation of VR-enabled hobbyist developers.

While it’s not exclusive to Valve’s Index system, Alyx players who own an Index will get the game for free and receive unique bonus content, including Alyx environments for SteamVR Home, alternative gun skins, and special unrevealed cosmetics for Counter-Strike and Defense of the Ancients 2. Alyx is also planned to be playable at launch on the Oculus Rift, the HTC Vive, and Oculus Quests via the new Link cable.

Alyx is meant as Valve’s “flagship” game for virtual reality, marking the company’s big debut on the platform following two years of teasing their developments. This is Valve’s first big single-player game in 8 years, after Portal 2.

Most crucially, however, it’s hard to overstate how big a deal it is that Half-Life, in any form, is actually back. 2007’s Episode 2 ended with a massive cliffhanger, and in the ensuing 12 years, there’s been no word whatsoever about a theoretical Episode Three. Imagine if George Lucas had inexplicably decided to do other things for a decade instead of making Return of the Jedi, and you’ve got an idea of how Half-Life fans have felt for the last 12 years. Even though Alyx is an “interquel,” it still represents forward motion for a series that, as recently as a month ago, seemed like it had been allowed to wither on the vine.

Half-Life: Alyx is available for pre-order via Steam for $59.99, and has a planned release date of March 2020.

Set between the events of Half-Life and Half-Life 2, Alyx Vance and her father Eli discover a secret that leads them into the heart of the Combine's occupation of City 17.

As Alyx, give humanity its last chance for survival. https://t.co/ApxdkAdzAX pic.twitter.com/00V2cD1zV7