Could this year be the year for Washington Hyperloop? For the fourth time, the students on University of Washington’s pod-racing team are taking aim at the top prize in tech titan Elon Musk’s competition, and this time they’ve got their racer down to fighting weight.

This year’s purple pod racer, which looks like a cross between a bobsled and a miniaturized bullet train, was unveiled Friday night at UW’s Husky Union Building.

“Our pod this year is about 60 percent of the weight of last year’s pod, with the same propulsion specs,” engineering senior Mitchell Frimodt, one of the veterans on the Hyperloop team, told GeekWire. “That’s our performance boost.”

Propulsive oomph per pound is a key factor in what’s become an annual tradition that plays out at SpaceX’s headquarters in Hawthorne, Calif. This year, Washington Hyperloop and a dozen other collegiate teams are due to compete on July 21. Competitors will show off the racers they’ve built, and the best of the pack will face off in time trials conducted in a mile-long tube that’s been built just across the street from SpaceX’s rocket factory.

The fastest team wins. And in the previous three competitions, the fastest team has been WARR Hyperloop from the Technical University of Munich in Germany. This year, Munich’s student engineers are racing under a different team name — TUM Hyperloop — but they’re expected to be every bit as formidable.

“We’re looking to give them a run for the money,” Frimodt said. 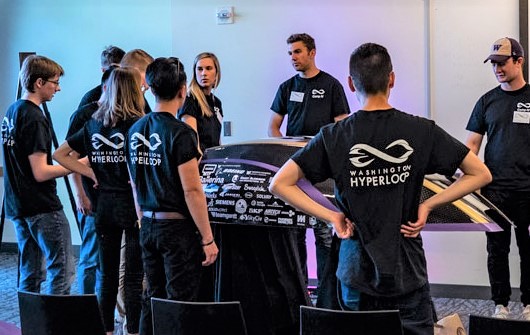 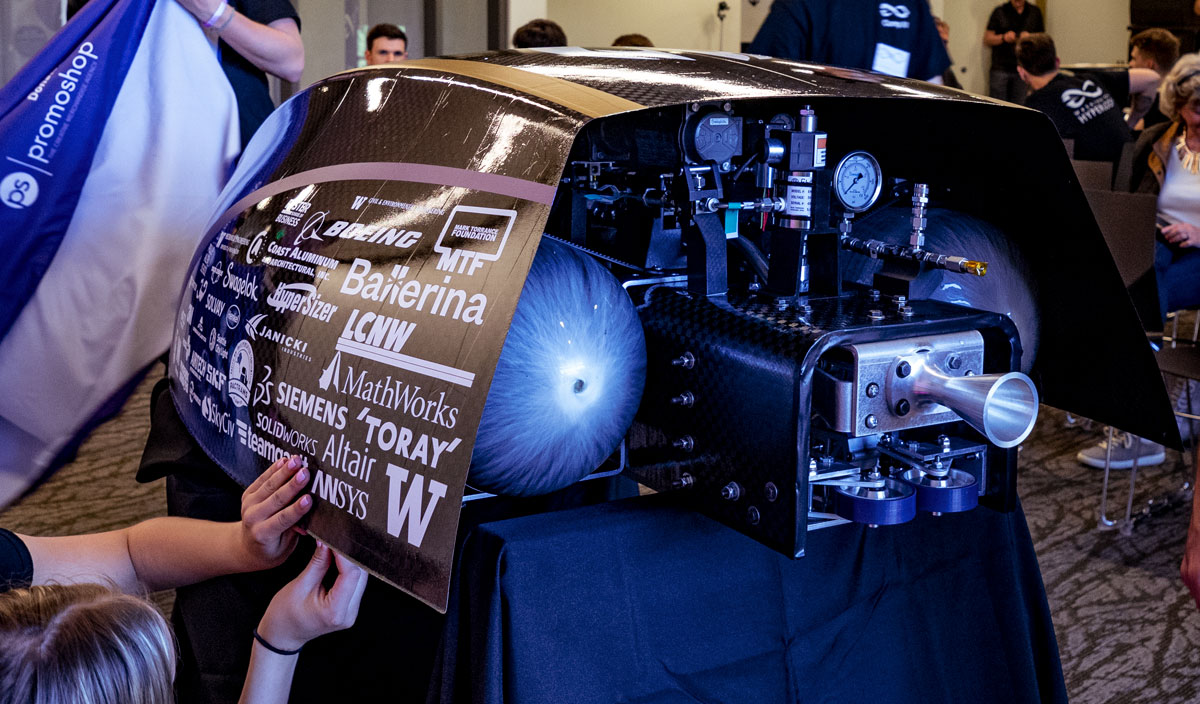 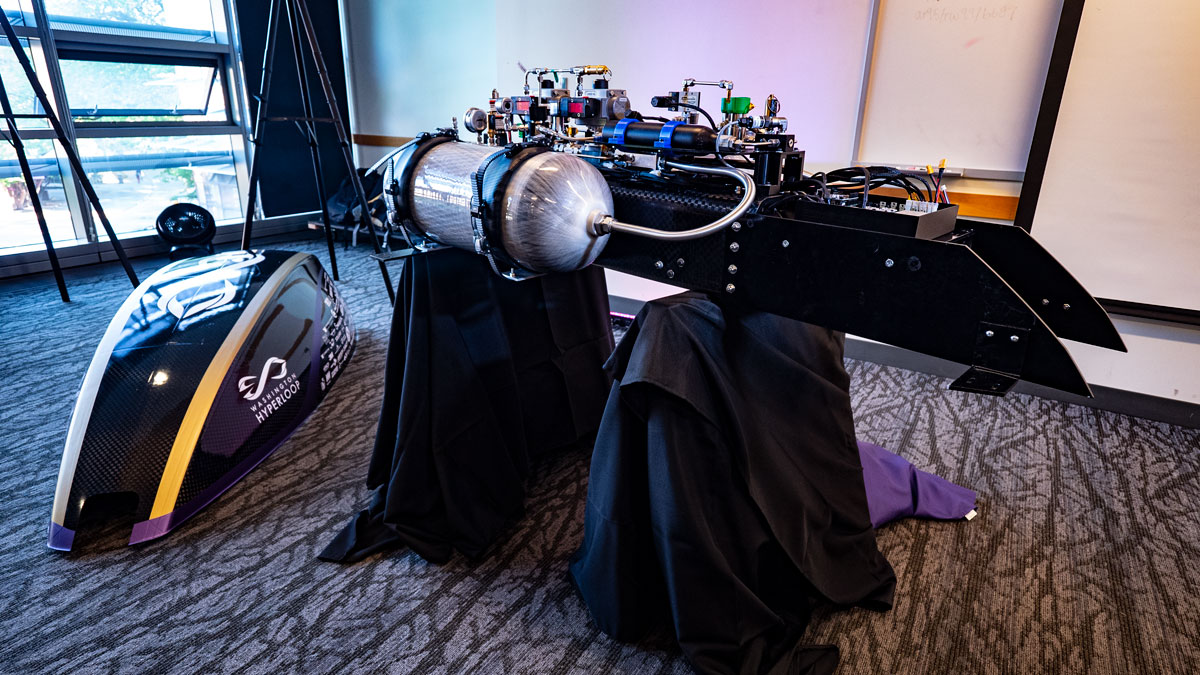 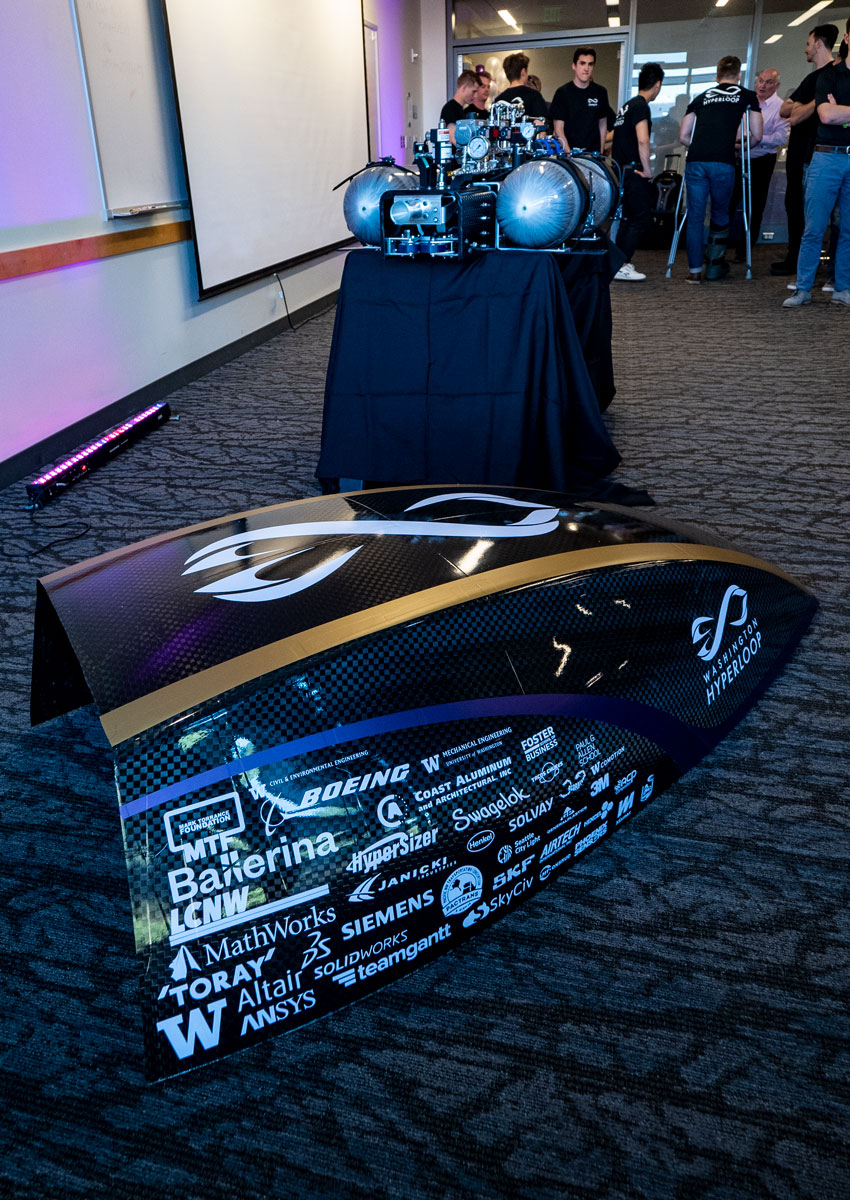 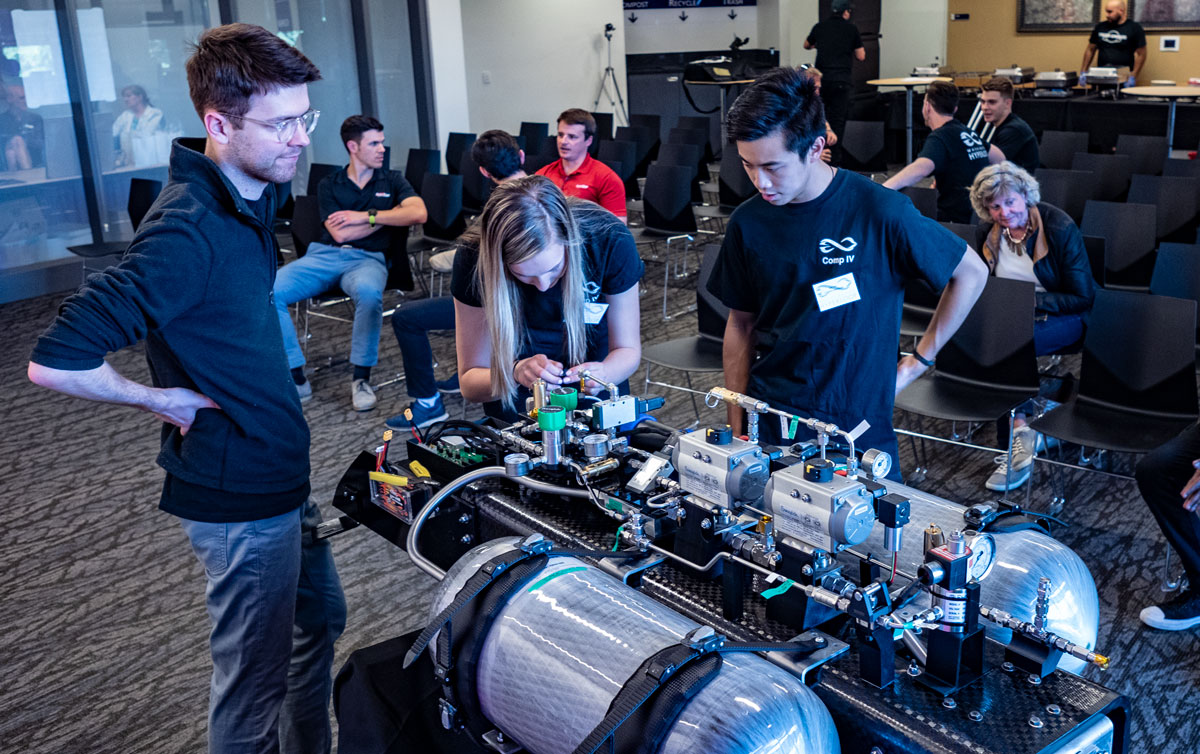 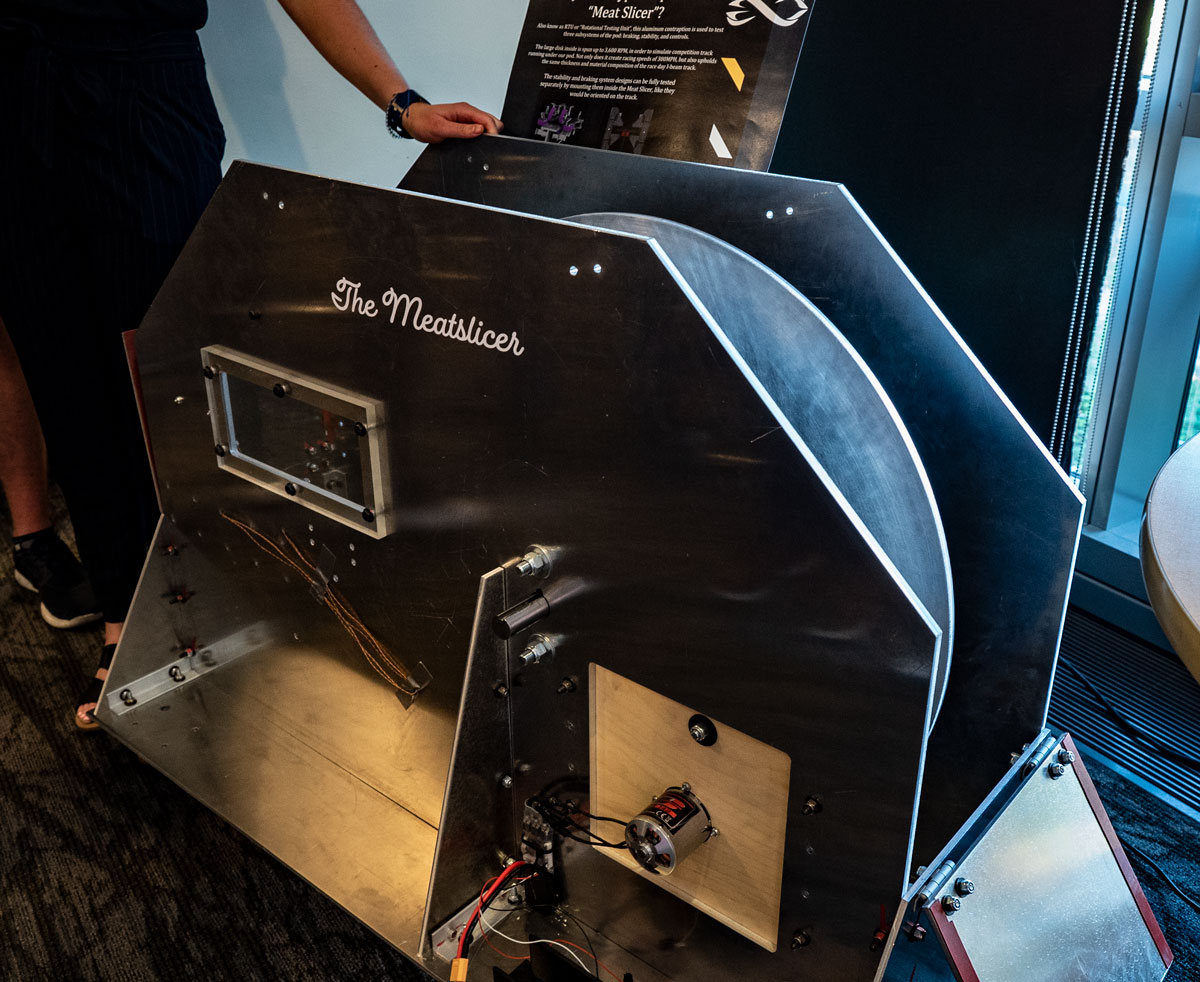 “The Meatslicer” is an apparatus designed for testing the pod, with a disk that spins as fast as 3,600 rpm to simulate what the pod would experience as it zips down SpaceX’s tunnel racetrack. (Margo Cavis Photo)

Frimodt is speaking figuratively: There’s no prize money as such, but the Hyperloop contest gives those who do well an enviable spotlight in the engineering world. Frimodt said some of Washington Hyperloop’s alumni are now working at SpaceX, Tesla, Apple and other cutting-edge ventures — including Musk’s very own tunneling venture, the Boring Company.

“One of our old business guys is actually with the Boring Company currently, down in L.A.,” he said. “I haven’t heard exactly what he’s up to down there, but that’s pretty cool. We’ve had one alum go on to start an electric van company.”

Musk came up with the Hyperloop concept in 2013 as a way to short-circuit traffic snarls within and between urban areas. The original concept called for pods to travel through low-pressure tubes at near-supersonic speeds, cutting the travel time between the San Francisco Bay Area and Los Angeles to about a half-hour. To cite another example, a Pacific Northwest Hyperloop could run between Seattle and Portland in 15 minutes.

Since then, the intercity Hyperloop concept has given rise to commercial ventures that don’t involve Musk, including Virgin Hyperloop One and Hyperloop Transportation Technologies. For now, Musk is concentrating on the Boring Company’s somewhat less speedy tunnel travel concept, which is known as the Loop. Loop projects are in various stages of development in Los Angeles, Las Vegas, Chicago and the Baltimore-Washington area.

Frimodt said most of the 40 or so members of the Washington Hyperloop team see their involvement as a way to exercise their general engineering skills, rather than creating a commercially viable Hyperloop pod. “For us, it’s more on pushing the edge of technology. … Our focus is very much on the competition,” he said.

Only about half of the team’s members are veterans of past Hyperloop contests. Thanks to the team’s previous successes, including an innovation prize won in last year’s contest, Washington Hyperloop’s organizers received “a ton of applicants” seeking to join the team last fall, Frimodt said.

So what’s the secret sauce for this year? It’s not necessarily the propulsion technology: The team is going with a cold-gas thruster system that’s similar to the one that won them fourth place in last year’s competition. Basically, pressurized nitrogen blasts through a rocket-like nozzle to shoot the pod down the Hyperloop track. “It’s a rocket without the combustion,” Frimodt explained.

One big change from last year has to do with weight reduction. This year’s team members were rigorous about enforcing weight budgets for each of the pod’s components, and were lots more liberal about using lightweight carbon composites rather than metal parts.

Another change has to do with advance preparation, particularly when it comes to the software side of the project. Last year, “people were working on our code on the day of the competition,” said Fedor Paretsky, a UW junior in applied physics who works on the control and power subsystem team.

This year, the Washington Hyperloop team is ahead of the game, development-wise. And one of the reasons for that has to do with one of the team’s sponsors, a California-based tech company named WSO2, which is providing the team with financial support as well as help with an open-source programming language for cloud-based applications known as Ballerina.

“Ballerina acts as our data relay,” Paretsky said. “It relays data every 25 milliseconds. … If we decide that something’s going wrong, or we need to do an emergency stop, Ballerina ensures that the pod is communicated with, efficiently.”

Ballerina also serves to coordinate software development. “Anybody can literally just pull the image [for the pod’s software] off the cloud,” he said.

In addition to WSO2, Ballerina and various UW departments, the team has recruited more than 30 sponsors ranging from Boeing to Pagliacci Pizza (and it doesn’t take an engineer to guess what Pagliacci is contributing). Their logos are all emblazoned on what Washington Hyperloop hopes will be this year’s top pod.

It could be a nail-biter: Last year’s competition at SpaceX saw the WARR team set a new world record for Hyperloop travel, with a top speed of 290 mph. Can Washington Hyperloop improve on that mark?

“We’re not 100 percent sure yet, until we get a final pod weight based off everything we put on there, and do our static-fire testing to characterize our propulsion system,” Frimodt said. “But it’s probably looking like somewhere from 260 miles an hour to 300 miles an hour.”