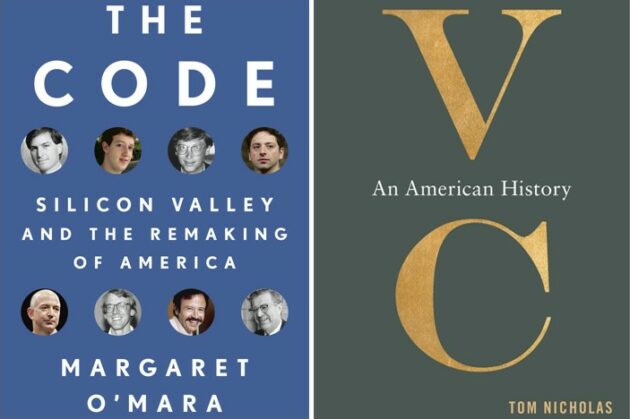 The accelerating growth of the tech economy during the past 70 years has generated numerous books seeking to capture its dynamics. Two recent books are worthy additions and reads, one by a University of Washington professor and the other by a Harvard professor.

Margaret O’Mara, professor of history at the UW, begins the story in 1949 in Palo Alto, which she characterizes as in “rural sleepiness.” But by the late 1950s, even though IBM in New York controlled 75 percent of the computer market, the Valley was in “full blossom,” attracting some of the best young engineering talent in the country as Stanford was undertaking the first of several doubling in size of its engineering program.

Tom Nicholas, a professor at Harvard Business School, begins the story in the 1800s when risky whaling expeditions to the North Pacific from New England seaports were financed by profit-sharing agreements between the sea captain, an “agent” and investors which had striking similarities to the structure of today’s venture capital financings of risky tech startup with founders, venture capitalists and investors. After an overly detailed examination of the first modern investment fund to focus on early stage technology startups — American Research and Development Corporation, founded in 1946 by a Harvard Business School professor — Nicholas, like O’Mara, spends most of his book writing about Silicon Valley. If he mentions Seattle more than once, I missed it.

The Valley, in truth, was where most of today’s tech economy began and it continues to dominate all other places, in terms of numbers of tech startups, unicorns (companies worth more than $1 billion), angel investors, venture firms, dollars invested in startups and most other metrics. A full history of Silicon Valley would require multiple volumes as demonstrated by these two books. They relate the same history mostly by covering different people, companies and events, and they still have to leave out important history. O’Mara makes Al Gore into a mini-hero of the Valley, and Nicholas fails to mention him. An interesting contrast is the intriguing detail in articles such as Double Down in the May 2019 issue of Vanity Fair about the Winklevoss twins, who hope to make even bigger returns from their bitcoin ventures as they did from being the contested co-founders with of Facebook with Mark Zuckerberg.

O’Mara’s book tells most of its history through interesting vignettes about famous as well as unknown figures who contributed to the growth of the tech industry. She highlights the stories of a number of women contributors while she levels well-deserved criticism at the male-dominated culture of the Valley that even today is only slowly changing. O’Mara’s earlier book on the Valley, Cities of Knowledge, developed the thesis that contrary to the legend of free enterprise and the great entrepreneur or inventor, much of the growth of the Valley’s early tech companies was because of government spending on military projects during the Cold War of the 1970s and 80s, investments in federal research, and grants to universities. She cites further convincing evidence in her current book of the early growth of Lockheed Missiles and Space Company and other traditional defense companies in the Valley.

O’Mara also describes favorable government policies such as lower capital gains taxes, loosening of investment restrictions on pension funds to permit venture capital investments, and changes in immigration laws that resulted in a flood of talented Asians and Eastern Europeans into the Valley. These deregulation policies were highly successful in freeing entrepreneurs and inventors to create our tech economy. In contrast, the attempt by Congress to stimulate early stage investing by creating federally licensed and regulated Small Business Investment Companies was easily overwhelmed by the less-regulated venture funds.

Efforts by Vice President Gore and others to create a national industrial policy succumbed to the proclivities of Democrat Bill Clinton and Republican Newt Gingrich. According to Gingrich: “The model Gore is trying to build is a futurist vision of the welfare state. He’s repainting the den; I want to build a whole new house.” Rather than subjecting the Internet to regulation by the federal government or via a “private monopsony, like a wired version of Ma Bell,” as O’Mara wrote, the National Science Foundation had been allowed to make a series of decisions in the 1990s to privatize access. The Internet was a decentralized, networked world where no one was in control. “After that, the number of internet hosts increased at a staggering rate, from 313,000 in 1990 to 43.2 million by 2000,” Nicholas wrote.

Europe was not so fortunate and, notwithstanding the development of the World Wide Web by Tim Berners-Lee and his collaborators at CERN in 1991, European policies of more heavily regulating tech companies have not produced vigorous technology economies and they lag far behind the United States.

Nicholas from his perch in Cambridge ignores the role of Seattle as the second most important tech center in the world. O’Mara, much better informed on Seattle, describes several of the key episodes of Microsoft and Amazon as well as a deserved tribute to Trish Dziko who left her career at Microsoft to create the Technology Access Foundation and a highly successful public school for minority and disadvantaged children. And although O’Mara labels Seattle a “sister techtropolis” of the Valley, she does not attempt to tell the story of the rise of Seattle to tech prominence and at one point characterizes Seattle as “the suburb of the Valley.”

Seattle’s tech history has yet to be written — which is too bad, because its story is different than Silicon Valley’s and more relevant to how other cities develop their own tech economies.

By most measures, the Valley eclipses the Seattle tech economy, but Seattle has the two most valuable companies by market capitalization: Microsoft and Amazon. The Bay Area has the next three. Seattle is the clear leader in cloud computing with Amazon and Microsoft ranked number one and two. In several other tech subjects, Seattle leads or equals the Valley, such as internet retail and artificial intelligence. There is lots of investment activity and startups in Boston, New York, Dallas and Austin, but none of them has a company rivaling Microsoft and Amazon and none has more than 130 significant engineering offices of major tech companies as does Seattle. Google and Facebook have more than 3,000 tech workers in Seattle and Apple, Alibaba, Baidu and Tencent are among others with sizable outposts.

Seattle’s tech history is also different than the Valley. Notably, the government was less important in its genesis. Clearly, all tech benefits from laissez faire regulatory policies and the government’s funding of research that led to important developments such as the internet. But unlike the importance of the defense industry companies to the Valley’s early history, Boeing, contrary to myth, was not responsible for the talent, culture, or funding that launched Microsoft, Amazon, and other tech companies. Boeing was insular and bureaucratic and though it had early efforts in software and microelectronics, it never pursued these as businesses.

Seattle’s tech history has yet to be written — which is too bad, because its story is different than Silicon Valley’s and more relevant to how other cities develop their own tech economies.

Both O’Mara and Nicholas relate how Frederick Terman, as dean of Stanford’s engineering school beginning in 1941 and later provost, nurtured strong relations between Stanford and local tech companies. In 1952 he designated a portion of undeveloped university land as the Stanford Industrial Park, supported the founding of Stanford Research Institute in 1946, populated by faculty pursuing “science for practical purposes,” and encouraged graduate students to start companies while teaching at the university. This was sharply in contrast to other universities, including the UW at that time, which discouraged faculty from being involved with private businesses.

Beginning in 1975, Stanford started hosting the meetings of the Homebrew Computer Club in the university’s Linear Accelerator Center as a gathering point for fledgling tinkerers and entrepreneurs, including Steve Jobs and Steven Wozniak, who wanted to showcase their latest tech inventions and share their ideas. This was in the same era when Paul Allen and Bill Gates were high school students and Allen received a letter from the UW that they would no longer be able to run their programs on the university’s mainframe computers.

The UW has more recently launched efforts such as CoMotion to support entrepreneurship and GIX, a joint venture tech grad school, but both of these are uneven efforts and lack adequate funding.

Neither book spends much time discussing the current regulatory threats from both Democratic and Republican politicians. O’Mara notes the rapid shift away from positive attitudes toward tech companies by citing comments by Missouri Democratic Senator Claire McCaskill during a 2013 hearing, when Steve Jobs was testifying about Apple’s creative accounting, in which she said “I love Apple!” Nicholas’ book ends with his conclusion that the benefits of our tech economy rests on our “cultural appetite for risk-taking that celebrates entrepreneurship’s spirit of adventure, that accepts unbridled avarice, and that encourages the insatiable pursuit of material financial gain.” As if to say to politicians, be careful that you don’t destroy this.

O’Mara ends not with politics nor the latest and greatest technologies and companies, but with a story of a tech couple who abandon the Bay Area and Seattle to pursue their own way in San Diego working for themselves, suggesting that this may be the future of the tech economy. We shall see.

If you can only read one of these books, you will find O’Mara’s more readable while giving you a good flavor of the growth of the tech industry in the Valley. Nicholas, at times is more academically tedious, but provides valuable details that O’Mara did not include.