We’re out of the loop because we’ve hired a new startup called Mystery to keep us out. The company uses technology to plan your evening without asking you to lift a finger.

Mystery was started by Shane Kovalsky and Vince Coppola, who met while working at Convoy, a billion-dollar Seattle startup that operates a marketplace for the trucking industry.

“At Convoy, we learned that very difficult operations problems can be automated, and we’re doing the same thing here,” said Coppola, Mystery’s chief technology officer. Initially, the pair wanted to plan entire weekends, but they soon scaled back those ambitions to planning evenings on the town, such as dates or small group outings.

After working under the radar for several months, Mystery just launched an app. The startup, which has six employees, also raised a seed round of $1.2 million led by Founders’ Co-op along with a cadre of other investors including Liquid 2 Ventures, Frontier Venture Capital, Gramercy Ventures, Ride Ventures, Pixvana CEO Forest Key, former LinkedIn and 23andMe COO Sarah Imbach, and Crowd Cow CEO Joe Heitzeberg.

So why did Coppola and Kovalsky jump ship from a wildly successful startup? “Convoy was a lot of fun because the growth was insane and there were a lot of hard problems,” said Kovalsky, Mystery’s CEO. “But at the end of the day, it was trucking. This is a product that we both really wanted.”

Embarrassingly, I actually need this service. There’s a task I’ve been sitting on for months: Plan a romantic surprise. But I procrastinated out of fear. How would the logistics work? What if it was lame?

When I signed up for Mystery, my decision fatigue was replaced with a brief questionnaire. Yes, I drink. No, I’m not a huge fan of loud restaurants. I also set my price range, time and pickup location.

After booking, I got an email with the bare-minimum details of my experience and what to expect. We were also given a number to text with any questions. My wife, Tierney, wanted to know what to wear, and Mystery gave us an answer right away.

Mystery asks for an astonishing amount of trust. Without knowing anything about what I was in for, I had already given them a credit card and an entire evening of our time. That’s a far more intimate relationship than most people have — or want to have — with a tech company. Or is it?

“We’ve been watching a generational shift in consumer preference toward consuming experiences instead of acquiring more stuff and believe Mystery taps into that growing demand in a unique and hard-to-copy way,” said Chris DeVore, managing partner at Founders’ Co-op.

Mystery is hard to imitate not only because of the technical complexity of planning personalized itineraries, but also because the startup vets each and every local vendor.

On the evening of the date, a Lyft driver showed up and we got in the car, oblivious to where we were headed. I felt a moment of panic that slowly gave way to relief. This is the information age, where cluelessness is a luxury.

The startup gets discounts on some of the experiences it provides, which it passes along to consumers. Since Mystery controls where customers spend their money, it can send them wherever it wants. That allows the startup to fill in demand when it would otherwise be weak, thus providing a service to sellers. (In technical jargon, the startup is filling “latent capacity” through “load balancing.”) 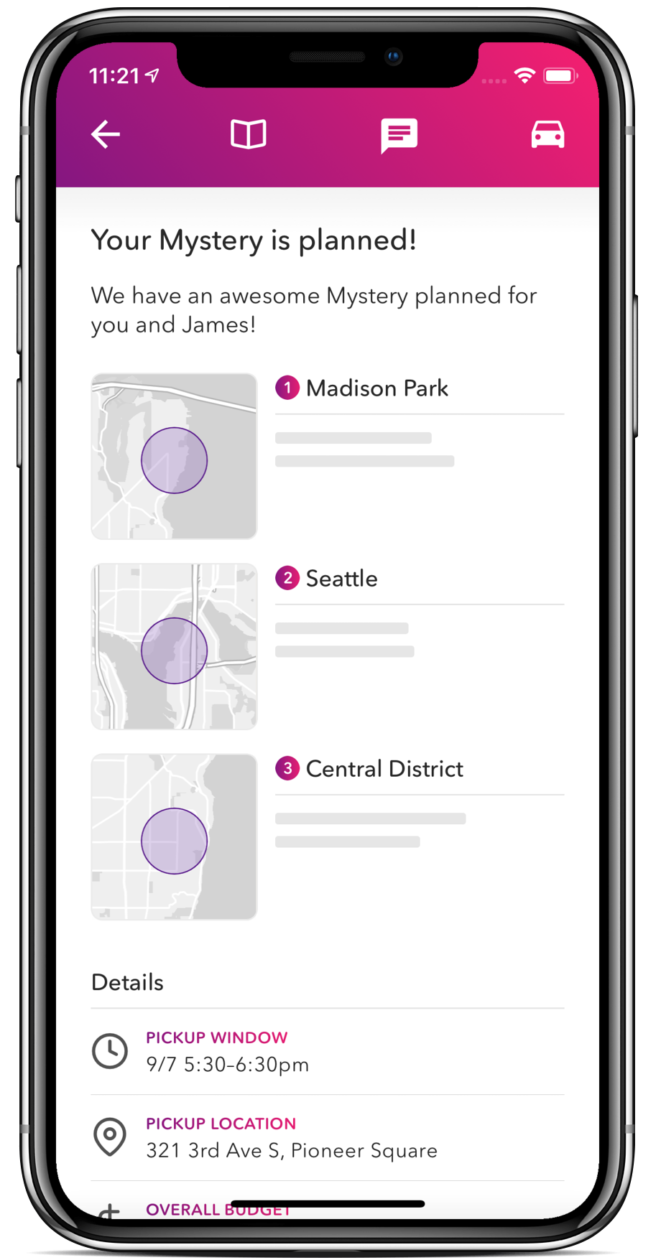 On that Friday evening, Mystery paired us with Jordan Hanssen, the tall and scruffy proprietor of Rowing Urban Waterways, an experience that gives tourists a view of the city by water.

We boarded a rowboat, and Hanssen launched into a history lesson of the city as we glided across Lake Union. As Hanssen regaled us with a history of Seattle that spanned the Great Seattle Fire through the gold rush, it was immediately apparent why Mystery chose him. He was approachable and unique in a way that a full tour company could never be.

Hanssen also has an incredible story. He’s a former professional athlete who rowed across the Atlantic Ocean and lived to write a book about it.

We passed beneath a concrete bridge and entered the water around Marsh Island, a small strip of land that feels a world away from the city. A pair of green herons flew overhead as we rowed past lilypads and beaver dams. Hanssen pointed to an eagle landing in a nest at the top of a dead tree.

A short while later, we arrived on the shore of Lake Washington and received a new text telling us to go to the Independent Pizzeria. As we headed up the hill, Hanssen sent us off with a long bellow from a conch shell. I’d later learn that our boat ride cost us far less than Hanssen’s advertised price on Airbnb Experiences — evidence of Mystery’s supply-demand strategy at work. (The vast majority of Mystery suppliers are paid directly vs. through a third party, Kovalsky said.)

There’s a broader philosophy behind Mystery: it believes the big platforms have hit a wall. Consumers can now survey thousands of restaurants, bars and experiences in no time. But do they trust the reviews? And are more choices a good thing?

We’re not selling our consumers on discounts. We’re selling on ease of purchase, on trust, on curation, on excitement.

Still, apps such as Yelp and Google are largely beneficial for consumers. But for sellers, that’s less often the case. Take Groupon, which was built on the idea that if people received a discount once, they’d come back for the full price offering later. That bargain didn’t exactly work out as planned.

“We’re not selling our consumers on discounts. We’re selling on ease of purchase, on trust, on curation, on excitement,” said Kovalsky.

After the boat ride, Mystery started to feel less like an oddball experiment and more like a real-life video game: I was following a predetermined storyline, but I could still make my own choices.

“This feels like a date from The Bachelor,” Tierney said. It’s true — the setup feels like there’s a production crew frantically arranging our evening so that we can focus on living life. By removing decisions and logistics from the equation, Mystery makes you feel like a celebrity.

At dinner, Mystery sent a text suggesting two dishes. We promptly ignored those and ordered the daily special, a pizza with a generous helping of seasonal morel mushrooms. The pizza came out and was glorious — easily the best we’ve had in Seattle and ranked on par with some of the top pizza shops in Brooklyn, where we lived until moving to Seattle last year.

Out of curiosity, I checked to see what Yelp had to say about the Independent. It gets mostly 5-star reviews and a smattering of 1-stars, with very little in between. Sound familiar?

Little details like the dining suggestion make Mystery feel like a high-touch service, but Kovalsky said it’s anything but. “For 90 percent of our dates, after we set them up we don’t look at them, we don’t touch them,” he said. “The users progress themselves through the entire thing.”

Mystery’s cut of the evening is only a $20 fee, which seemed very low considering the amount of coordination involved. But the startup is also sometimes able to earn a cut from suppliers who are eager to bring in more customers. In these situations, Kovalsky stressed that Mystery’s customers never pay more than the market rate.

After dinner, there’s no need to pay. Mystery handled the bill and the tip, which is included in the final charge. We walked outside where our next cab was waiting to take us to our final destination of the evening, a bustling wine bar called Bottlehouse.

A glass of wine and a trio of truffles later, and we were in denial that the date was coming to an end. The evening felt like one we would have planned for ourselves if only we had taken the time.

The last cab arrived, and this time we knew the destination was home. As we left, Tierney asked me the most important question of all: “Would you do it again?”

Maybe it was the wine, the full stomach or the fact that GeekWire had footed the bill for this assignment, but I didn’t hesitate.