A Techstars Seattle grad that wants to create a “personal cloud-based memory bank” for its users has the attention of investors.

Kristalic just reeled in nearly $2 million as part of a seed round. Donuts co-founder Paul Stahura; 3Rodeo; Renegade Ventures; Fairchild Fund II; Moai Capital; and an investor from Sequoia Capital’s “scout program” are among the backers.

The San Francisco-based startup is building an AI-powered assistant designed to record your work-related conversations throughout a day and capture all the data in an easy-to-digest searchable format. The idea is to help workers remember important information they might have otherwise forgotten — for example, who agreed to what in last week’s meeting, or what changes did the customer request?

Kristalic does not require additional software, using already available hardware such as AirPods or your smartphone to record voice conversations. It also provides “weekly speaking updates” that shows how you verbally interact with people. The company is working with beta users who have several meetings per week. 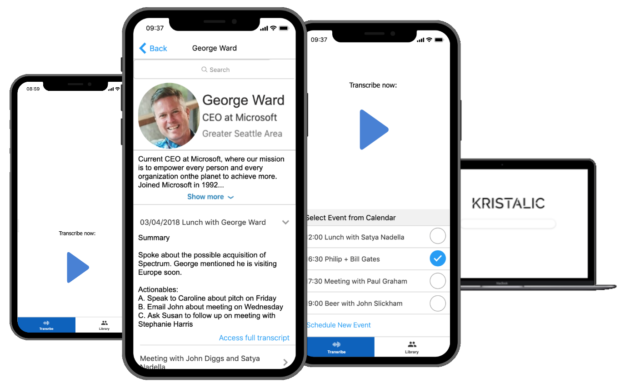 There are other similar startups such as Otter.ai and Voicea. Tools from Microsoft and Google also record meetings. But Kristalic said it differs by extracting only the most important information from a meeting. The app also gets better over time as it learns what notes the user prefers.

“For this approach, we have access to a phenomenal team specialized in extracting the most important information from sequences with deep learning,” said Kristalic co-founder Filip Kozera. “We’ve been fortunate to work with this team during our academic careers.”

Four additional researchers have been doing part-time work for Kristalic and will join full-time over the next six months as a result of the funding.

Kristalic aims to ride a surge in voice-related technology and usage. One investor recently predicted that voice tech will replace keyboards in five years. Tech giants such as Google are also working on related voice-transcription products.