With millions of employees at thousands of companies now getting work done with collaboration software such as Slack and Microsoft Teams, it’s created opportunities for startups to build tools that help enhance these new workflows.

Investors — including Slack’s own VC fund — like what they see so far with Polly, a Seattle startup that announced a $7 million funding round led by Madrona Venture Group. The Slack Fund, Amplify Partners, Fathom Capital, and existing investors also participated.

What Polly does: Polly’s software is used to quickly collect feedback from employees using Slack, Microsoft Teams, or Hangouts Chat. Use cases include anything from automated polls every time an IT ticket closes or periodic surveys for new hires going through the onboarding process. The idea is to gather and analyze data to improve operations across various parts of a company.

“As work converges in Slack, we’ve seen an increase in demand from teams and organizations to connect these pieces of work together,” said Polly CEO and co-founder Samir Diwan. “This is why you see Slack and Teams using the language ‘collaboration hub’ more often, because that’s exactly what’s happening. As teams look to measure the success of these processes, with Polly they can trigger feedback requests based off of key events.” 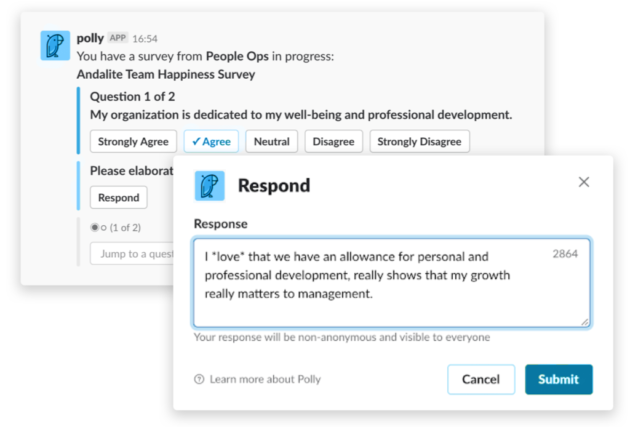 Pivot: Polly launched more than three years ago. After graduating from Techstars Seattle in 2016, it raised a $1.2 million seed round. At the time, Polly was focused on using chatbots to survey employees inside of Slack. Diwan said the software shifted to be less conversational.

“Conversational has a time/place, but when users and customers want something, sometimes there are significantly faster ways then to have a text-based conversation,” he said. “There is space in this world for conversational bots — Polly isn’t one of them.”

But the company was certainly on the right path. Since Polly started, the use of Slack and other new tools such as Microsoft Teams has skyrocketed. Slack, which is preparing to go public this year, has 10 million daily users and more than 85,000 paying customers as of last month. Microsoft said in September that it had 329,000 organizations using Teams.

Competition: There are a few other Slack-related polling tools but Diwan said Polly’s software sees higher engagement in part because of its simple and intuitive design. “Others have tried to copy us but they haven’t been able to pull it off,” he noted.

Customers: Polly has hundreds of customers, Diwan said. The company launched its enterprise product last year and tripled its user base in 2018.

Employees: Polly employs 11 people and plans to double its headcount.

Investor insight: Total funding to date is $10.4 million. Madrona Partner Sudip Chakrabarti will join Polly’s board as a result of the new funding. Here’s why he’s excited about the company, per a blog post from today:

Our investment in Polly follows from our core thesis that, enterprise workflows, for the most part, will move away from legacy systems and email to modern online collaborations platforms like Slack, Teams and Mattermost. While these platforms started their lives as messaging tools, they now have the opportunity to become the “operating system” for modern enterprise workflows. That is already happening. Forward-looking organizations are creating Slack teams whose mandate is to adopt and/or build applications to enable enterprise workflows on Slack.

As enterprise workflows move to collaboration tools, measuring the effectiveness of those workflows — so that those could be analyzed and further improved — becomes critically important. That is exactly what Polly enables. Polly enables organizations to collect and understand feedback from key constituents so that enterprises can measure and optimize their workflows and thereby, deliver a much better experience.