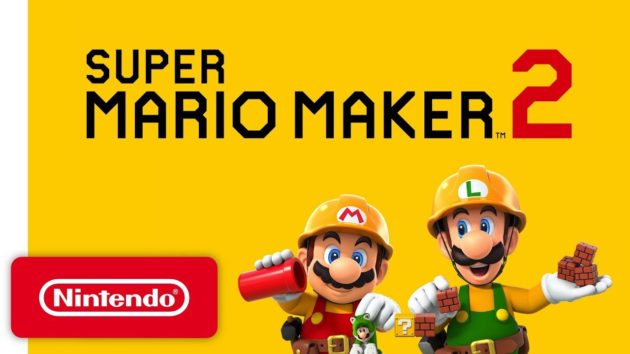 Editor’s note: This is a rundown of the latest video game news from the Pacific Northwest and around the globe. Submit tips, story ideas, and press releases at games@geekwire.com.

We’d usually be heading into the traditional summer drought right about now, as everyone gears up for the heavy blitz of the holiday season. This July is unusually busy, however, thanks to a handful of high-profile releases at the end of June (Super Mario Maker 2, Judgment, Bloodstained: Ritual of the Night, SNK’s new Samurai Shodown) and going forward into July.

— Nintendo’s Super Mario Maker 2 is, unsurprisingly, already a hit. American sales charts aren’t available yet, but SMM2 was the biggest video game launch of the year in the U.K., and entered the Japanese charts at a commanding No. 1, with more than double the sales of the No. 2 game.

SMM2 debuted on the Nintendo Switch late last month, both as a physical disc and a digital release, for $59.99. Announced back in February in a Nintendo Direct online broadcast, SMM2 is primarily a construction set, meant to let users create, share, and collaborate on an endless number of custom-made levels for Mario.

Nintendo also offers a $70 bundle that pairs SMM2 with a 12-month Nintendo Switch Online subscription, which is necessary to download other users’ levels or share your own via Nintendo’s servers.

Initial reception for the game is positive, with a few caveats — head here for more reviews. And if you’re playing SMM2 yourself, be sure to check out these four levels from Vancouver, BC-based game developer Matt Thorson (Celeste).

— Last month’s surprise announcement that Myst is going back to TV production courtesy of Village Roadshow left one big question on our minds.

The original press release mentioned that the Myst universe would form the basis for many possible productions, including “unscripted television content.” That phrase usually refers to something like a reality show, which is a weird concept when applied to a fantasy series about magical books that teleport you to other worlds. What does “unscripted content” mean for something like Myst, owned by Mead, Wash.-based Cyan Worlds?

“Good question without a real answer right now,” Rand Miller, Cyan CEO, wrote in an email to GeekWire. “Suffice it to say that we have a few ideas that don’t exactly fit into scripted TV or movies right now, and having all of this under one development roof with the more transitional TV and movies means that they can cross-pollinate in some very interesting ways.”

— Netflix’s Stranger Things released its third season on July 4, accompanied by Stranger Things 3: The Game, a $20 retro-styled adventure by the Texas-based indie studio Bonus XP and published by Seattle-based En Masse Entertainment. Unlike the previous Stranger Things game from Bonus XP, which was only for mobile devices, ST3: The Game is a 16-bit-styled exploratory adventure game for up to two players that’s available on virtually every modern platform, including Steam and the Nintendo Switch. The game is marketed as a companion piece to season 3 of the show, with 12 playable characters from its cast.

— In an unexpected Stranger Things video game crossover, portals to the Upside Down have been appearing in Fortnite. Right now, if entered, the portals simply teleport players to a different part of the island.

— One of the biggest releases this month, if not this year, is Shadowbringers (July 2), the third expansion for Square Enix’s popular MMORPG Final Fantasy XIV. If you hang out in nerd circles, you’ve probably got at least one friend (I have four) who canceled plans or left a party early last week to stay in and level their FFXIV character. Shadowbringers lets players explore a new land called the First, raises the level cap to 80, and adds two new playable jobs and races, one of the latter of which is the long-requested Viera.

— Electronic Arts, which is otherwise well-known for its massive franchises such as Madden, has a less-publicized imprint called EA Originals for publishing indie games. Sea of Solitude is the latest EA Original, by German studio Jo-Mei Games, and came out last week to mixed, polarizing reviews. SoS (hey, I see what you did there) is a metaphorical illustration of trauma, exploring mental health issues through the lens of a woman who’s become a monster, exploring a flooded city in an attempt to find out why.

— On Friday, Capcom, with a near-total absence of fanfare, released a mobile card game called Teppen, made in conjunction with GungHo Entertainment (Ragnarok Online) and starring characters from Street Fighter, Monster Hunter, Devil May Cry, and Resident Evil.

— EA and Respawn’s Apex Legends, their high-profile entry into the same sub-genre as Fortnite Battle Royale, started its second season on July 2. The new content includes a new character, Wattson, a defender who wields powerful electrical fields, and the dramatic reshaping of the game’s map, courtesy of the invasion of a bunch of giant dinosaurs.

— PlayStation Plus subscribers in July receive the digital deluxe version of Quantic Dream’s Detroit: Become Human, which comes with a free copy of the popular PS3 game Heavy Rain, and Aquiris Game Studio’s arcade racer Horizon Chase Turbo. Unusually, Sony changed this month’s Plus games at the last second; Detroit is a replacement for Konami’s Pro Evolution Soccer 2019, and neither Sony or Konami have offered an explanation thereof.

— If you only subscribe to the Xbox Game Pass for PC, however, your lineup of games for July is a little different. You still got Shadow of War and My Time at Portia, along with Toby Fox’s indie hit RPG Undertale. On the July 11, you’ll also get Unavowed and the Seattle-built indie “Metroidvania” Timespinner.

— The latest games for the Switch Online service’s NES library have yet to be released, but the platform is about to have a busy month, with high-profile exclusive Marvel Ultimate Alliance 3: The Black Order coming on July 19, followed by the newest Fire Emblem on July 26.

— Seattle-based Spiderweb Software has officially entered the closed beta phase on its latest indie, old-school CRPG Queen’s Wish. Successfully funded via Kickstarter in the summer of 2018, Jeff Vogel’s latest game is slated for a release towards the end of 2019.

— In other crowdfunding news, the Seattle-based indie studio Glass Bottom Games (Hot Tin Roof, Spartan Fist) has successfully backed its latest project, the birds-riding-boards game SkateBIRD, via Kickstarter. SkateBIRD is on track to triple its original funding goal. The crowdfunding success seems to have come down to a risky strategy by Glass Bottom Games, as SkateBIRD launched its campaign at this year’s E3 — thanks to a couple of conspicuous no-shows (such as EA’s Skate 4), it was the only skateboarding game at the conference.

— Eric “ConcernedApe” Barone, the Seattle-based developer of Stardew Valley, announced on July 2 via Twitter that the long-awaited multiplayer updates to the game are finally on the way for Xbox One and PlayStation 4. Both patches are “in certification,” which is the last stage of QA testing on console before a product can be released. The multiplayer mode for Stardew Valley, which allows up to four players to build a farm together, has been available for PC players since last August, and on the Nintendo Switch since December.

Barone took over publishing duties on Stardew Valley from previous publisher Chucklefish back in December, and since then has formed a small development team to continue production on additional content for Stardew Valley.

— Fullbright, based in Portland, Oregon, and Annapurna Interactive have released a physical edition of the seminal “walking simulator” Gone Home for the Nintendo Switch.

— One of the eight capstone projects in the University of Washington’s Program on Climate Change this year is a video game. Built in Twine by graduate student Elisa Bonnin, Cascadia (not to be confused with Portland, Ore.-based Cascadia Games) is a three-part interactive story set in a post-climate-change America. “The game is intended to reference the old Oregon Trail games,” Bonnin writes, and is focused on the human side of climate change. Cascadia was developed in conjunction with EarthGames, a Seattle-based group of academics and game developers that builds games “to teach and inspire players about the natural world and our role within it.”

— If you’ve ever wanted to play a first-person shooter that is somehow adorable and bloodless while also being fast-paced and demanding, Seattle-based tinyBuild has published Quicktequila’s Lovely Planet 2: April Skies ($9.99, Steam for PC, Mac, and Linux). It’s more of a series of violent puzzles than anything else, requiring quick reflexes and pinpoint accuracy for success in a series of 10- and 20-second levels. It’s never too difficult to succeed in Lovely Planet 2, but you need absolute perfection to “Ace” a level, and that’s where the frustration kicks in. It remains weirdly addictive despite that, however, and for $10, it’s one of the safer bets in tinyBuild’s weird, weird indie catalog.

— We tested a 104-key mechanical gaming keyboard ($49.95) from Redmond, Wash.-based Plugable Performance. The first surprise is how compact it is, taking up maybe two-thirds the space of my usual keyboard (a Razr Anansi); the second is how loud it is. Even by the standards of other mechanical keyboards, Plugable’s keys have a solid, authoritative click when hit, and if you’re typing fast on one of them (say, if you’re writing a column), it sounds like hard rain on a metal roof. It doesn’t require specialized drivers or software to work, however, and features a few handy shortcuts I didn’t know I needed.

The one I’ve gotten a lot of use out of, unexpectedly, is being able to switch the functions of WASD and arrow keys on the fly, which is handy for things such as weird Flash games. I’ve paid a lot more to get less out of a gaming keyboard, though there has been a learning curve; I’m used to having more space for my hands on a keyboard than this.

— I lost a lot of time last week to Bloodstained: Ritual of the Night ($39.99, for PS4, XB1, Switch, and PC), Koji Igarashi’s spiritual successor to the later, exploration-based Castlevania games. Funded by an unusually successful Kickstarter four years ago, Bloodstained‘s path to market has been full of ups and downs, and is still dealing with issues like a botched port to the Switch. (Fixes are reportedly on the way, but if you’ve got a choice, the PS4 version appears to be the most stable.)

Bloodstained is very deliberately a next-generation, legally distinct version of Igarashi’s seminal 1998 PlayStation game Castlevania: Symphony of the Night (the game that put the “-vania” in “Metroidvania“), with a few mechanics taken from Symphony‘s various sequels. Most notably, protagonist Miriam can absorb a dizzying number of powers by slaying the demonic inhabitants of the gothic castle she’s exploring, in order to find and stop her cursed friend Gebel before he ends the world. Bloodstained has a weird power curve — the first 20 minutes of the game are the hardest — but once you’ve made it past that initial roadblock, you’re in for a good 20 hours of exploration, secrets, and strange weapons.