“We have a healthy spacecraft,” mission operations manager Alice Bowman announced here at Johns Hopkins University’s Applied Physics Laboratory. “We’ve just accomplished the most distant flyby. We are ready for Ultima Thule science transmissions … science to help us understand the origins of our solar system.”

The report was greeted with cheers and hugs at APL’s mission control center.

Part of the delay was due to the fact that New Horizons had to finish loading up the scientific data before it could turn its antenna to transmit back, and another big factor was the 6-hour-plus light travel time for the signals.

Today’s 15-minute “Phone Home” transmission was designed to let the mission team at APL know that the spacecraft was healthy and successfully recorded readings from its cameras and other scientific instruments. 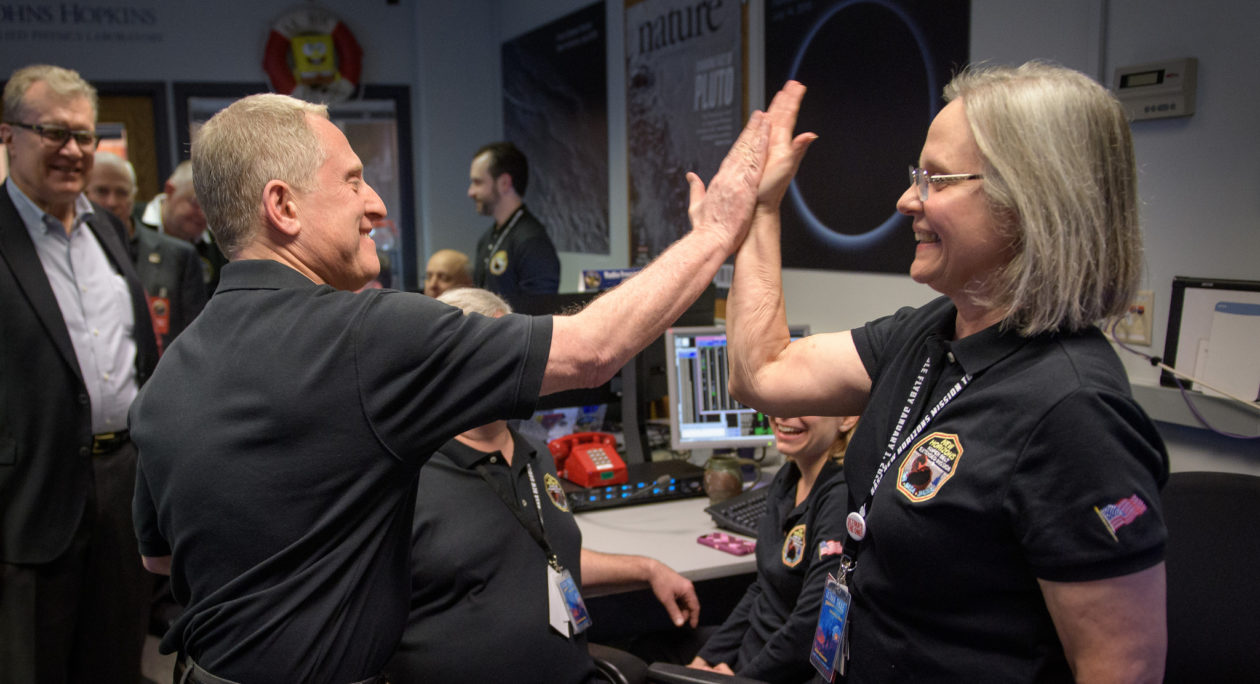 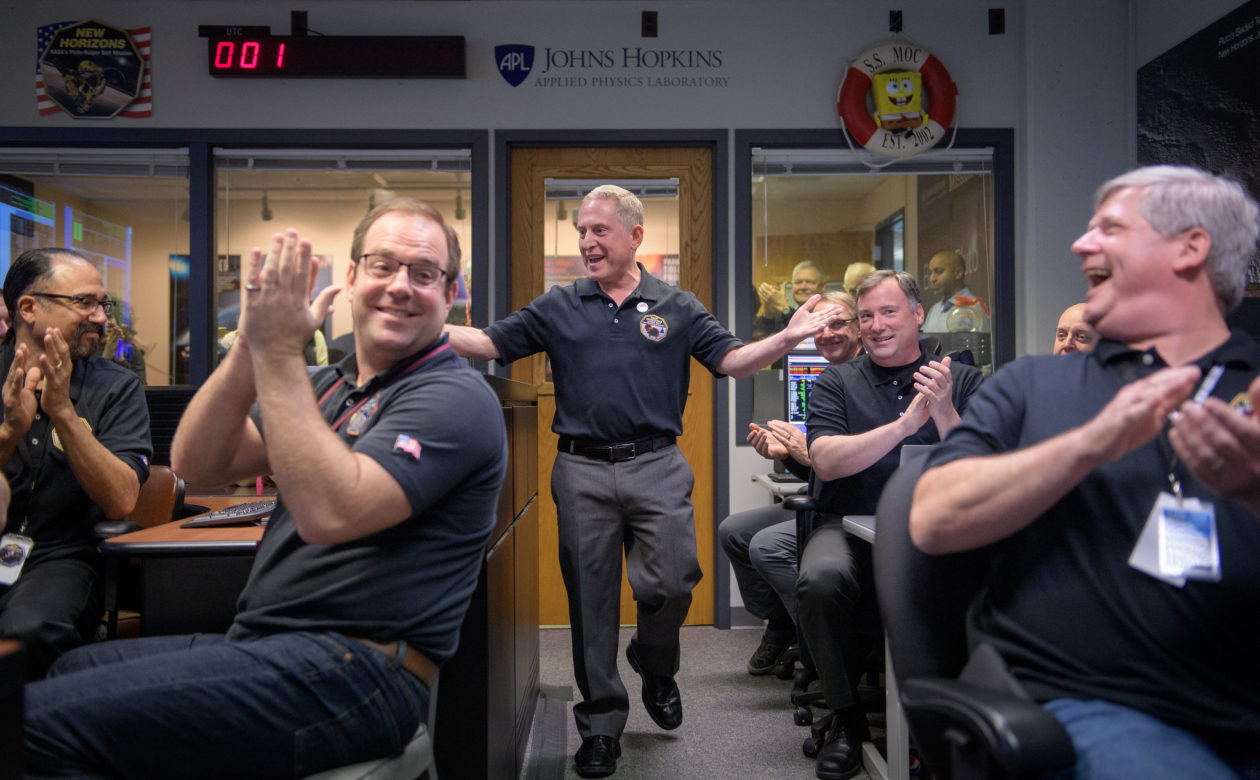 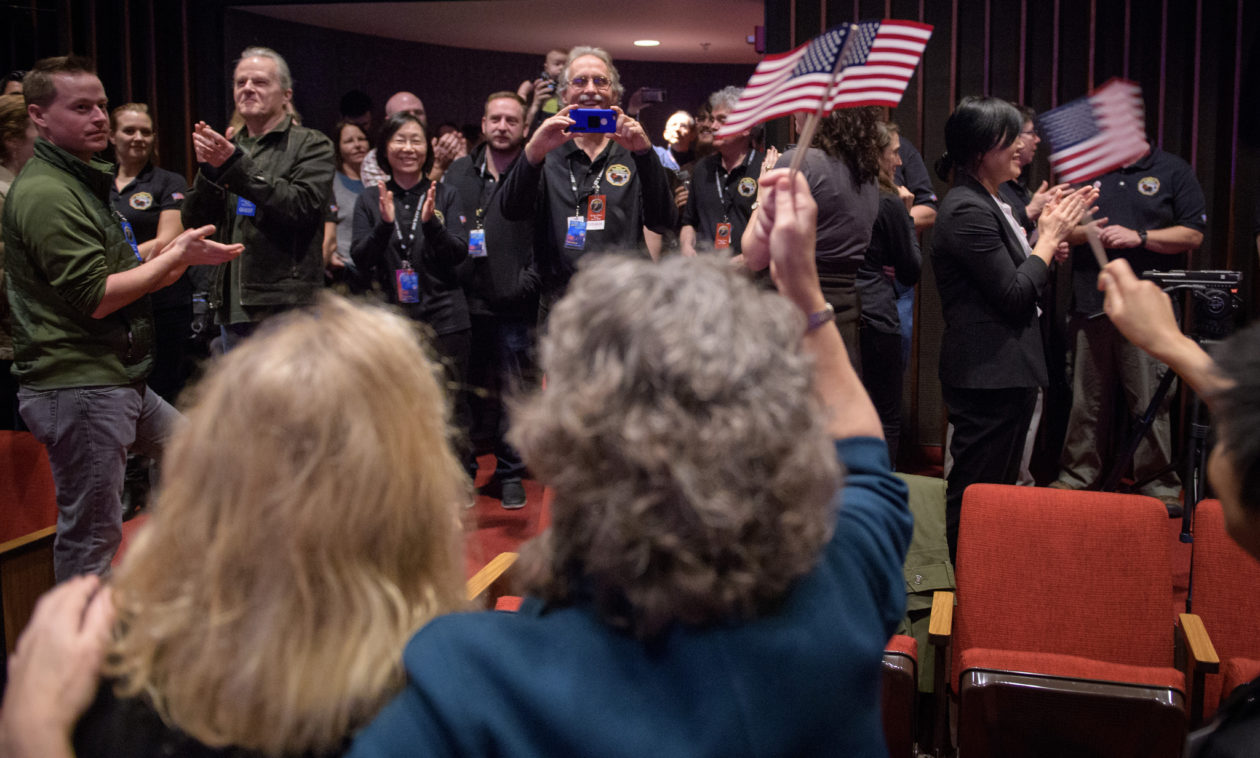 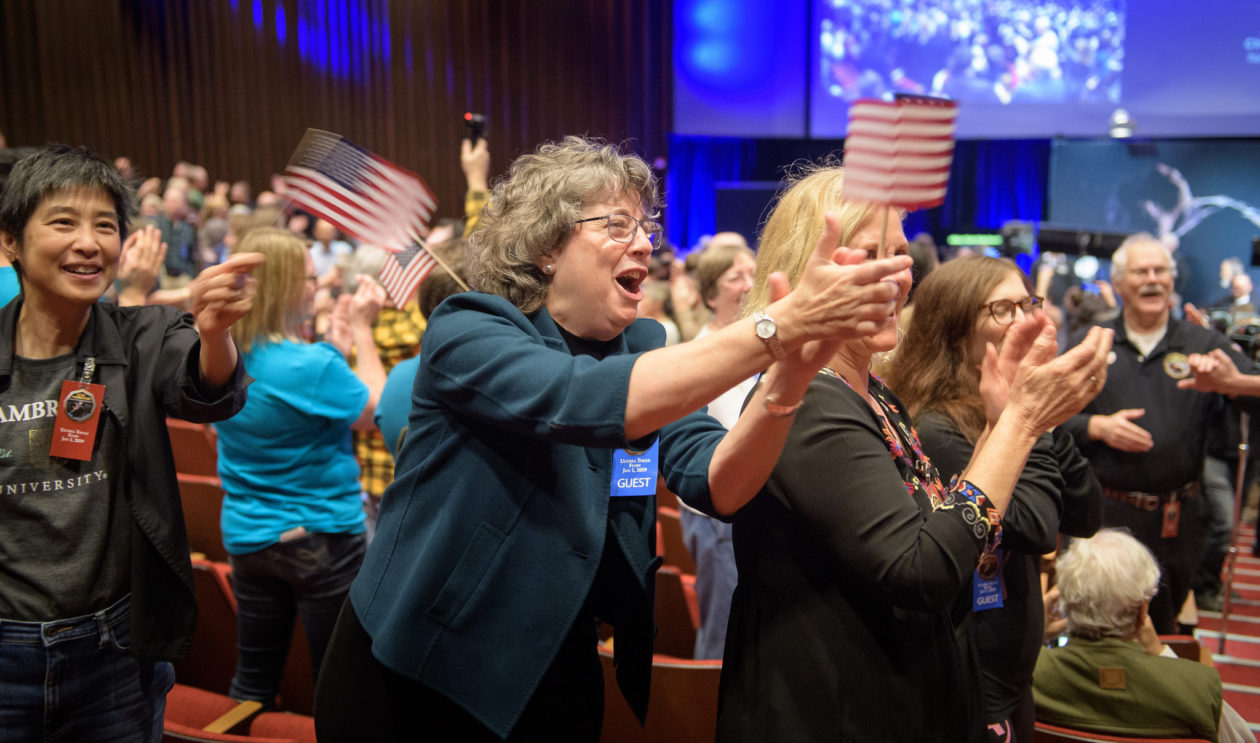 The data will be flowing in over the next few days, at a glacial rate of no more than 1,000 bits per second. That rate is so low due to the limitations of the spacecraft’s 15-watt transmitter, plus the extreme distances involved.

But eventually the science team expects to get detailed pictures — plus temperature readings, spectral analyses and particle counts — from a world that’s thought to rank among the most primitive types of objects in the solar system. New Horizons sped past Ultima at a speed of 32,000 mph, coming as close as 2,200 miles.

During a news conference conducted an hour after the “Phone Home” call, mission team leaders shared an updated picture of Ultima Thule, based on imagery sent back just before the flyby.

The highly processed picture showed it to be an elongated object, about 21 miles long and 9 miles wide (35 by 15 kilometers), and having a bilobate shape like a peanut or a bowling pin. (Or, for that matter, like Comet 67P/Churyumov-Gerasimenko, the cosmic “rubber ducky” studied up close by the European Space Agency’s Rosetta mission several years ago.)

Project scientist Hal Weaver said the series of images showed that Ultima is rotating, but it’s too early to say whether the rotation period is closer to 15 hours or 30 hours. Either way, it looks as if the object was rotating right in front of New Horizons’ camera during the approach.

There’s a chance that Ultima might be two close-together objects rather than a single mass, but Weaver said “my money is on the bilobate object.”

More detailed flyby images will be unveiled on Wednesday, shifting New Horizons’ long-running campaign of discovery back into high gear..

It’s expected to take 20 months for all the data to be downloaded. “This mission has always been about delayed gratification,” Stern said.

Scientists say Ultima Thule represents a class of objects known as “cold classicals” in the Kuiper Belt, a broad stretch of icy material beyond the orbit of Neptune. Cold classicals are relatively unchanged remnants from the solar system’s beginnings, more than 4.5 billion years ago.

“It really is a fossil, a relic from that time of formation,” Weaver said.

That makes Ultima different from Pluto, which was New Horizons’ primary target back in 2015. Ultima Thule was chosen as the next target after an intensive search that made use of observing time on the Hubble Space Telescope.

At the news conference, Bowman said the Ultima Thule “Phone Home” experience was different from the Pluto experience — in part because the flyby festivities reached their climax on New Year’s Eve, the night before contact was confirmed.

“It was this feeling like, ‘Gosh, we already celebrated, but we really haven’t gotten that signal back,’ ” she said. “I think I was probably a little bit more nervous this time — but we did it again.”