Smartsheet nearly tripled spending on research and development over the last two years, to close to $60 million in 2018, as it aims to offer new products and up its customer base in an increasingly crowded field of competitors in the “collaborative work management” market.

In an interview with GeekWire, Smartsheet CEO Mark Mader said the focus on R&D has helped the company evolve rapidly in recent years, adding visualization tools and task automation to its offerings. Smartsheet has also invested in building deep integrations with popular collaboration apps such as Slack and Microsoft Teams, as well as Office 365 and Salesforce.

“As that surface area increases, the need to invest in R&D also increases,” Mader said of broadening Smartsheet’s product reach. “Fortunately, as the company has grown, the ability to make those investments has been there.”

Smartsheet’s revenue spiked to $177.7 million in 2018, up 60 percent over the year before and 167 percent over the $66.9 million it brought in in 2016. Without that revenue boost, Mader said, the increased spending on R&D wouldn’t be feasible.

Partially due to R&D spending, Smartsheet’s operating expenses have ballooned from $68 million in 2016 to $199 million in 2018. With increased expenses and rapid employee growth, Smartsheet has been going deeper into the red, reporting a net loss of $35.98 million after accounting for stock-based compensation expenses in 2018, compared with a loss of $29.6 million the year before and a loss of $13.8 million in 2016.

Smartsheet said its losses have accumulated as a result of “substantial investments we made to develop our platform and acquire new customers.” At the end of the year, Smartsheet had more than 95,000 customers.

The company projected in its 10-K that it will continue to invest, and it can’t guarantee profitability anytime soon: “We expect our operating expenses to increase in the future due to anticipated increases in sales and marketing expenses, research and development expenses, operations costs, and general and administrative costs, and therefore we expect our losses to continue for the foreseeable future.”

Annual 10-K filings from public companies offer a peek into how they spend their money, and what they are worried about. Under the “risk factors” category, Smartsheet notes that it faces competition from a variety of providers.

Smartsheet contends in the 10-K that its primary competition remains “manual, email- and spreadsheet-based processes from providers such as Microsoft and Google that users have historically relied on to manage work,” according to the filing. In addition, some of the features of Smartsheet’s products compete with offerings from companies Asana, Atlassian, Planview, and Workfront.

Smartsheet finds itself in an interesting place, competing in some ways with products from Microsoft and Google while also integrating deeply with them. Mader says Smartsheet’s customer base uses a number of different programs and applications and it’s important for the company to play well with others, regardless of potential competition.

“Almost none of our customers, especially those at scale, are all-in from a single provider; it does not exist within our customer base,” Mader said. 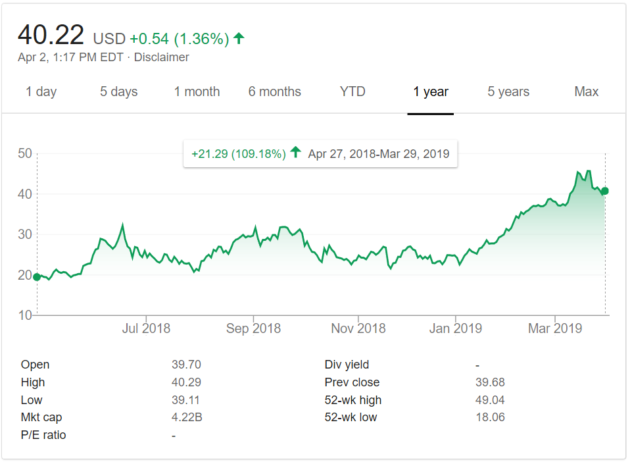 Smartsheet’s stock has spiked since its IPO last April, rising 110 percent and giving the company a market value of approximately $4.2 billion. Smartsheet is among a crop of “collaboration work management” enterprise companies attracting interest from investors in the public and private markets that includes Asana, Airtable, Wrike, Trello, and giants such as Google and Microsoft.

Mader called the collaborative work management market a very young one. He compared it to the ride-hailing market, predicting that one or more of the younger companies will rise up in the coming years, but he wasn’t sure which one.

“It’s still such an early market, with us as the first company in collaborative work management to go public. There’s still a community of players who are trying to figure out the monetization and how to grow a successful business on an economic dimension, beyond having a bunch of free users,” Mader said.

Unlike the ride-hailing market, however, where companies like Uber and Lyft offer roughly similar services, each company in collaborative work management has a very different point of view. While Smartsheet is focusing on a broad base of users, others are targeting specific industries and types of workers.

In the last three years Smartsheet says it has grown its workforce from 274 employees to 1,101, including 792 at its headquarters in Bellevue. Smartsheet’s Bellevue office totals 155,000 square feet, according to the filing, and it also has offices in Boston and Edinburgh.

Mader said investors are giving Smartsheet leeway to continue to prioritize investment, revenue and growth. Mader cited a concept in the software-as-a-service market called “The Rule of 40 Percent” that is meant to balance growth and profitability. Under the rule, a healthy company’s annual revenue growth rate plus operating margin should equal or exceed 40 percent. Mader said Smartsheet is consistently above that threshold.

“We know where we want to end up,” he said, “and provided we can continue to maintain that balance of investment and growth, we will continue to invest.”