Smartsheet beat Wall Street expectations for both revenue and profit during its fiscal third quarter, posting revenue of $71.5 million, up 53 percent year-over-year, and a non-GAAP net loss of $0.15. Analysts expected revenue of $69 million and a loss of $0.18 per share.

“We delivered another strong quarter in Q3 and are well-positioned for the future,” Smartsheet CEO Mark Mader said in a statement. “We are demonstrating the ability to extend and expand across the enterprise and, most importantly, customers are realizing value and are leaning in.” 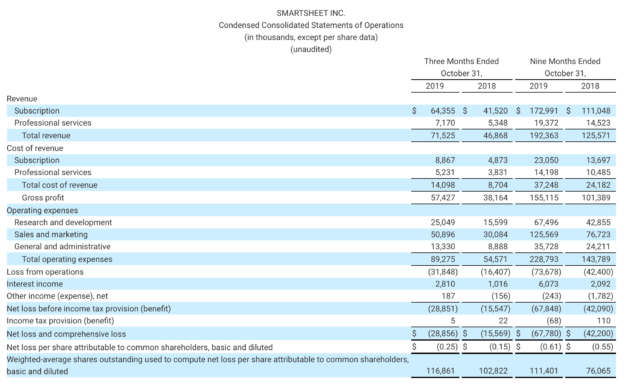 Smartsheet’s subscription revenue came in at $64.4 million for the quarter, up 55 percent. It ended the quarter with 83,139 domain-based customers, up from 82,186 three months ago.

Smartsheet continues to see growth with its largest customers — 770 companies now spend more than $50,000 annually with Smartsheet. That’s up from 635 in the second quarter; 518 in the first quarter; 444 in the fourth quarter of 2018; and up 114 percent year-over-year.

The company also announced Wednesday that Mike Gregoire has joined its board of directors. Gregoire is a partner at Brighton Park Capital and a 25-year tech industry vet. He’ll also serve on the board’s Compensation Committee.

Smartsheet’s stock is up 65 percent this year, closing Wednesday at around $44 per share. The company’s offering price was $15 per share when it went public last year. Its market value is $5.1 billion.

This past June, Smartsheet raised an additional $392 million in gross proceeds through a public offering. The company raised $150 million in its IPO.

Smartsheet is among a crop of “collaboration work management” enterprise companies attracting interest from investors in the public and private markets. Others include Asana, Airtable, Wrike, Trello, and more. Giants such as Google and Microsoft are also building competing software.