Smartsheet beat Wall Street expectations for both revenue and profit during its fiscal second quarter, posting revenue of $64.6 million, up 53 percent year-over-year, and a non-GAAP net loss of $0.08. Analysts expected revenue of $63.5 million and a loss of $0.16 per share.

Despite that, the company’s stock was down 8 percent in after-hours trading Wednesday.

The Bellevue, Wash.-based work collaboration software maker was in line with what it projected in the previous quarter. Its estimates for full fiscal year 2020 also stayed steady, with revenue expectations of $265 to $268 million — up slightly from the previous range — and a net loss of $0.58 to $0.54.

“We delivered another strong quarter by executing our strategy of providing high-value solutions for enterprises, expanding Smartsheet’s presence in new and existing customers, and driving international growth,” Smartsheet CEO Mark Mader said in a statement. “Our platform, designed to accelerate individual and enterprise achievement, enabled more teams and businesses of all sizes to move faster, address significant challenges, and drive innovation.”

Smartsheet’s subscription revenue came in at $58.3 million for the quarter, up 56 percent. It ended the quarter with 82,186 domain-based customers, up from 80,280 three months ago. 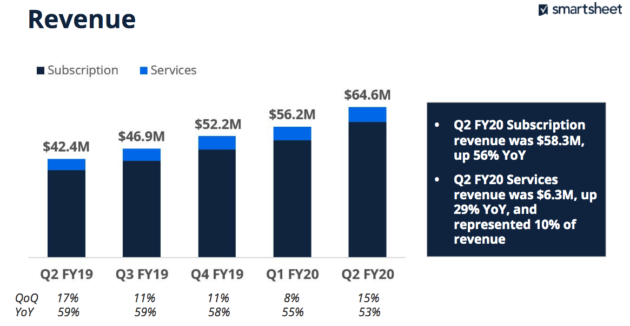 Smartsheet continues to see growth with its largest customers — 635 companies now spend more than $50,000 annually with Smartsheet. That’s up from 518 in the first quarter; 444 in the fourth quarter of 2018; and 360 in the third quarter, and up 113 percent year-over-year.

Smartsheet’s stock has nearly doubled in price this year, closing Wednesday at around $48 per share. The company’s offering price was $15 per share when it went public last year. Its market value is $5.5 billion, up from $4 billion three months ago.

This past June, Smartsheet raised an additional $392 million in gross proceeds through a public offering. The company raised $150 million in its IPO.

Smartsheet is among a crop of “collaboration work management” enterprise companies attracting interest from investors in the public and private markets. Others include Asana, Airtable, Wrike, Trello, and more. Giants such as Google and Microsoft are also building competing software.