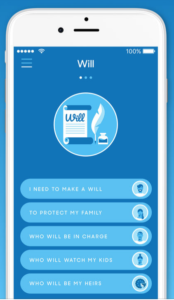 Ask just about any financial advisor and they’ll tell you that you should have a will — but more than half of Americans don’t.

Seattle startup Tomorrow wants to make wills, trusts and other end-of-life planning easier through an app, and it raised $8.9 million to fund those efforts, according to a new regulatory filing.

The company did not respond to multiple emails from GeekWire. We’ll update this post if we hear back.

Tomorrow takes a familiar page from the startup playbook: it digitizes what is normally a paper-filled process. But by going after end-of-life finances, it’s targeting a market that’s often ignored by fintech companies, which skew toward banking, payments, and investments for young people.

Veteran entrepreneur Dave Hanley founded Tomorrow in 2016. He lost both of his parents unexpectedly and wasn’t ready for the difficult financial and legal processes that followed. The experience made him realize how many people are unprepared to handle long-term financial and legal decisions — particularly those that lack the time or money required.

In addition to writing up a basic will, Tomorrow’s app lets users assign guardians for their kids, shop for life insurance, and define who will inherit what. The company makes money through referrals on life insurance and a premium version of the app.

Hanley previously sold social media consultancy Banyan Branch to Deloitte Digital in 2013. His startup Shelfari was acquired by Amazon in 2009.

Hanley stayed on at Deloitte for nearly three years before he teamed up with his three Tomorrow co-founders: former Creditnet President Josh Heckathorn; ex-Starbucks mobile engineering leader Wayne Rambo (who is now at Amazon); and startup veteran Erik Berg.

Since launching, the app has been generally well-received, garnering around 4,000 reviews in Apple’s app store with an average rating of 4.6/5 stars. The company has 24 employees on LinkedIn.