When it comes to female characters in games, there are basically two options: the weak princess type who needs saving or the strong warrior type who isn’t afraid of anything. It’s rare to see an everyday girl in a modern setting, and even more rare to see a woman in her 30s. But those are exactly the characters in “The Window Box,” a new game from Sundew Studios, led by Allie Ast.

“It was important for me to have this game be made by women for women,” Ast said. “One of the problems with games for women is that we get hit with the same old stuff and that same old stuff was written by men.”

Those problems have led to a dichotomy for the female audience.

“I feel like the female audience for games is either ‘gamer’ or someone who plays on a mobile device, and there’s not really in-between content to bridge that gap,” Ast said.

“The Window Box,” which was developed in Seattle over the past two years, follows five women who meet up after not seeing each other for a long time and get trapped inside a house because of a massive rainstorm. The game is primarily a visual novel, allowing players to visit different parts of the house and explore interactions between the group as a whole and between specific characters. It contains puzzle elements throughout, some of which are quirky and unusual, like a meeting agenda for a conversation and a small talk slot machine

“I think everyone at some point when they’re talking with someone they haven’t seen in a while would like to be given a topic to talk about,” Ast said. 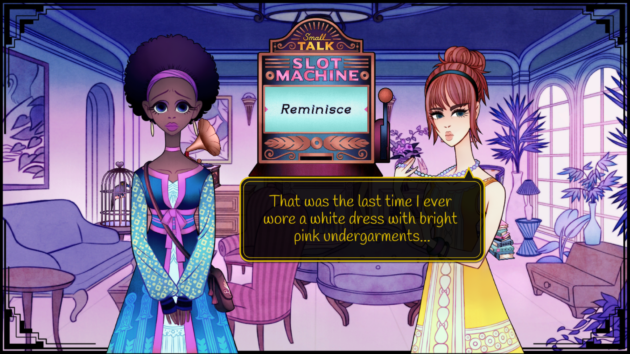 “The Window Box” is a narrative game in part because those are the games Ast enjoys herself. She listed “Night in the Woods” and “Kentucky Route Zero” as some of her favorites. She also has a background in creative writing and has done a fair share of theater. The idea for the game came from a commission by a theater for a new play inspired the Cuban playwright Maria Irene Fornes. Instead of writing a play to submit to the theater, Ast took the requirements for the commission and made them into a game.

The characters in the game are dealing with issues that are common to modern women. One has a career but is expecting a baby and trying to work out how her life will change in the future. Another is a die-hard career woman who’s obsessed with climbing her way up the corporate ladder. They’re all dealing with negotiating personal relationships on top of these issues.

“I basically took everything I’m scared about as a woman in this day and age and made a character for each of them,” Ast said. “None of the characters are perfect, but I think a lot of women can relate to them. I really want women to see themselves in this game.”

“The Window Box” is available now on STEAM.