Facebook has made a lot of headlines for being on the wrong side of democracy and privacy in the past couple years, and if you’ve been remotely tuned into this, you might have questioned how much time you spend on the platform.

Zucked: Waking Up to the Facebook Catastrophe will leave you questioning your future on Facebook even more. 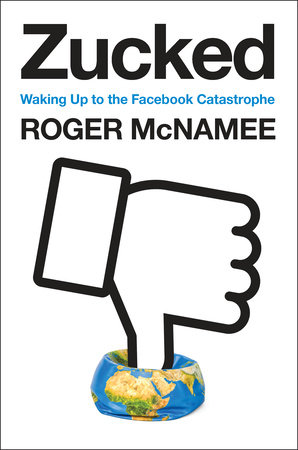 An early Facebook investor with 35 years of experience in Silicon Valley, Roger McNamee’s personal investigation into Facebook’s misdoings is a hefty report on the tech giant’s growth-at-all-costs mantra at the expense of our personal privacy and data, and allowing harmful misinformation to run amok. These practices have been linked to the Russians impacting our last presidential election and even to genocide in Myanmar.

The main difference between reading those accounts when they emerged in the news vs. reading them all at once as documented in Zucked is the bleak reminder that collectively we tend to forgive and forget too easily. McNamee’s chapters outline the background of each controversial Facebook-related incident of recent past, and the disregard for humanity hits you all at once: bam, bam, bam. This journey into the dark heart of Facebook, especially the blatant disregard of Mark Zuckerberg and Sheryl Sandberg to right wrongs, is mesmerizing and terrifying all at once.

Once a fan of Facebook, and even a mentor to Zuckerberg in its earlier days (he was vital in helping Facebook bring Sandberg on board), McNamee first became concerned with content on Facebook when he saw polarizing campaign posts in 2016. He reached out to both before the election expressing his concerns. When these were dismissed after repeated attempts to talk about Russian interference in our election, he began his research on what exactly was going on with Facebook.

What McNamee discovered was that the company’s hunger for new users and increasing their time on site for advertisers outweighed any moral obligation.

“Zuck created Facebook to bring the world together,” McNamee writes. “What I did not know when I met him but would eventually discover was that his idealism was unbuffered by realism or empathy.”

Facebook’s initial response to McNamee was that it was only a platform — not a media company — and therefore not responsible for what third parties posted. It’s a common defense evoked by other social media giants, like Twitter, deflecting their role in allowing hate speech and spreading misinformation. As McNamee reasserts, Facebook has long lived by its “move fast and break things” mentality, even at the cost of its users.

The world watched this unfold over 2017 into 2018, with Facebook’s typical “deny, delay, deflect, dissemble” defense mode. The night before the first Congressional hearing, the company “disclosed that 126 million users had been exposed to Russian interference,” along with 20 million on Instagram. But as McNamee writes, “In an election where only 137 million people voted, a campaign that targeted 126 million eligible votes almost certainly had an impact.”

The U.S. election, along with Brexit, were affected by this proliferation of fake news, but Facebook has also played a role in the outbreak of violence against minority populations in Sri Lanka and Myanmar, spread by online hate speech. In developing nations where Facebook is the only source of news for many people, the opportunities for bad actors is absolutely catastrophic.

And these filter bubbles, or tribes, that we’ve been bundled into will only get worse as AI gets better, which now has the capabilities to “anticipate our thoughts and emotions.”

“Facebook’s advertising business model depends on engagement, which can best be triggered through appeals to our most basic emotions,” he writes. ” ‘Lizard brain’ emotions such as fear and anger produce a more uniform reaction and are more viral in a mass audience.”

He contends that the problem with Facebook is that it lives in its own “preference bubble,” immune to criticism. The site has been running psychological experiments on us and asking us to blindly hand over our data, which we do. Facebook, along with the other tech giants he calls out like Google and Amazon, exploit you in a game that you can never truly win.

McNamee singles out Facebook because they’ve been in the hot seat the most over these major issues of control and data privacy. Other tech monopolies, like Google and Amazon, could just as easily be embroiled in similar scandals involving consumer data and misuse of you as a mindless commodity to sell to advertisers.

McNamee points out that this is a decidedly different take on how to treat people than the tech geeks of old, aka Steve Jobs, who wanted to make computers to engage and delight the imagination, like a “bicycle for the mind.” He says that the hubris that infects Facebook is not only a Facebook problem. It’s a mind-set that thrives under Silicon Valley’s libertarianism, where “no one needs to feel guilty about ambition or greed.”

“You can imagine how attractive a philosophy that absolves practitioners of responsibility for the impact of their actions on others would be to entrepreneurs and investors in Silicon Valley. They embraced it.”

This win-at-all-costs, disruptive, and unregulated model of doing business not only absolves these companies from harming others, it kills competition. Facebook users really have no other platform to migrate to, so it can do what it wants. Today, entrepreneurs have two choices: Start something and hope to be acquired by one of the giants, or be one of the “flood of startups that do things your mother used to do for you.”

Zucked is not all gloom and doom. McNamee, a self-admitted, old-school tech “hippie” and a co-founder in his Elevation fund with U2’s Bono, writes that while these companies have burned through 50 years of goodwill built by previous tech companies, he has strong ideas about where we need to go to restore responsibility, usability, and good faith in tech going forward.

To start, create people-first products that give back the power to own and control data and privacy, coupled with humane design (no casino-like wheels or gadgets or “likes” — meaningless rewards that keep you hooked). Additionally, McNamee supports government regulation, including antitrust laws. He says the tech industry is no more complicated than health care, nuclear power, or banking, and should be treated as such.

Zucked is a chilling tale of a major tech giant choosing the wrong path, again and again. It’s an essential read for anyone concerned about their freedom, privacy and data, and AI playing a larger, more intrusive role in your life, especially with those little devices like Amazon Echo and Google Home sitting in your house. Since the ’90s, we’ve gone from the utopian idea of tech democratizing information and empowering people, to a one-way ticket to getting your next consumer fix, a commodity to be sold to the highest-paying advertisers.

“I have spent more than two years trying to understand Facebook’s role in the 2016 election and other undesirable events,” McNamee writes toward the end. “In the process, I have learned about the other ways the internet platforms have transformed society and the economy. While intellectually stimulating, the journey has been emotionally draining. I have learned things about Facebook, Google, YouTube, and Instagram that both terrify and depress me.”