The best moments in Days Gone are also its most intense.

The game’s not-zombies, “Freakers,” aren’t much of a threat at all if you can fight them one at a time. By pairs, they’re a little more dangerous. If three or four show up, it’s time to get clever or maybe throw a bomb. When Freakers show up in groups of 50, screaming and running headlong at you in a weirdly fluid human wave, your heart jumps into your throat and you immediately have to start improvising.

Days Gone is an exclusive for the PlayStation 4, made by Sony’s SIE Bend Studio in Bend, Ore. The studio was founded in 1993 under the name Eidetic, by two former Infocom employees. After the surprise success of its stealth game Syphon Filter in 1999, Eidetic was bought by Sony and renamed the Bend Studio. It subsequently continued to develop new Syphon Filter games, as well as side games in the Resistance and Uncharted franchises.

Development for Days Gone has been going on since 2015, with a couple of major delays along the way. It feels like a well-crafted, deliberate distillation of some of the most popular zombie games, shows, and movies from four years ago, all thrown together into a deliberately grimy, weather-faded, post-apocalyptic version of the studio’s backyard. 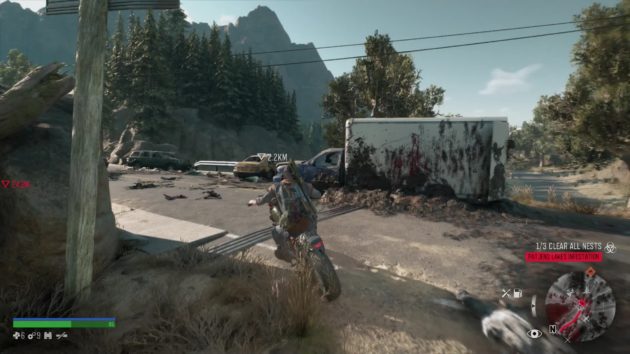 The detail in that environment is one of the best things about Days Gone. The first time I explored a town, it was weird when I saw how many buildings had seemingly random open windows, broken fences, and rooftop exits.

Then I had to revisit the same town a couple of hours later with 100 Freakers in hot pursuit, and it all made sense. Whenever you’re on the run from a horde, everything you can do to slow them down or split them up becomes crucial, no matter how simple it is. Every high ledge, back door, low fence, and crashed car is an obstacle that you can use to create a little space between you and the zombie mosh pit that’s trying to gnaw your head off. Even if you just buy a second, that’s one extra second in which to slap together a bomb, reload a gun, or throw a distraction.

You end up leading several hundred screeching monsters on this desperate “Tom & Jerry” chase scene through half a zip code. You can dive through windows, use hallways as choke points, set up traps, duck through fences, leave noisy distractions to attract the Freakers into ambush positions, and take potshots whenever you can, knocking down their numbers one and two at a time until you escape, win, or die.

There’s nothing else quite like it in current video games, which makes it a shame that it takes such a low proportion of Days Gone’s running time. For most of it, you play the part of a motorcycle-riding bounty hunter, moving between isolated settlements of survivors in search of odd jobs, supplies, and a frankly insane number of collectibles. The standard 2019 sandbox-game formula is in full effect here, where you spend most of your free time cleaning out enemy camps and capturing bunkers, in order to take over the world map piece by piece.

Every time it started feeling a little too routine, though, I ended up running for my life from another hundreds-strong zombie lynch mob, and it got my attention all over again.

The rest of Days Gone, the workaday moments where you do Typical Sandbox Stuff, plays like they didn’t finish it so much as they finally had to stop developing it. Days Gone is decidedly rough around the edges, especially when compared to a lot of Sony’s recent first-party exclusives. I never ran into any serious crashes, but did have to deal with the occasional worrying framerate drop, the audio cutting out without warning, and rock-stupid enemy AI. Some of the missions end abruptly, or feel as if they’re not quite done, and every so often, the physics engine glitches out and some zombie’s body goes flying into low orbit.

Days Gone does have solid fundamentals, though. It’s poised on the same borderline between stealth, action, and survival horror as something like The Last of Us, but successfully transplants those systems into a small, detailed open world. You’ve got a solid toolkit for shooting, driving, and stealth, along with one of the better-feeling motorcycles I’ve ever driven in a sandbox game. It’s decidedly unpolished in some areas, but what it does well, it does very well. 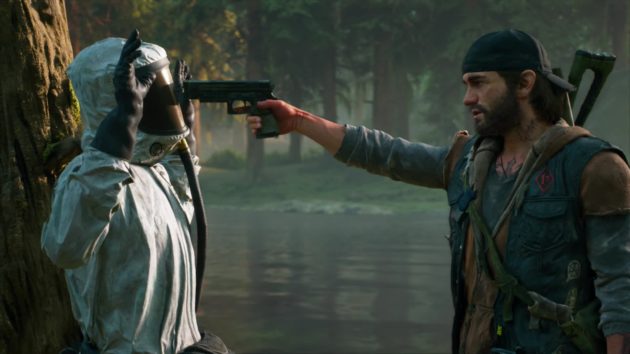 The game is set in backwoods Oregon, in a small area of tiny towns, rest stops, and tourist traps, a little over two years since the fall of civilization. A disease broke out that turned most of the human population into cannibalistic, violent Freakers, which drove the survivors out of the cities and into the countryside. Now, the survivors have mostly banded together into a handful of reinforced encampments, built out of vacation homes and roadside attractions, where they try to survive off of what resources and supplies are left in the area.

What’s impressive is that Days Gone does do both action and stealth reasonably well, if not remarkably.

You play as Deacon St. John, an Army veteran and biker who lost his wife in the initial outbreak. These days, he’s a drifter, doing odd jobs for the local camps alongside his buddy Boozer. The game begins when, over the course of a surprisingly short period of time, Deacon’s bike gets stolen, Boozer gets badly injured, and Deacon learns that there was more to the story of his wife’s death than he initially realized. That sends Deacon off on a series of new jobs, in order to save Boozer and finally come to terms with his loss.

One of the things I like here is that Days Gone is mostly a story about humans caught in a bad situation, who are dealing with it as best they can. Everyone in it is half-nuts from PTSD, but this isn’t about how humans are the real monsters. It’s just about people, messy and broken and trying to put their lives back together. It’s especially obvious when you run into one of the flashback levels, where the whole game’s color palette instantly expands into a Romantic landscape painting. The main game is so heavily tinged by survivors’ guilt that it’s downshifting the color spectrum.

The actual gameplay is fairly standard stuff, albeit executed well. You use stealth and distraction tactics to set up ambushes or avoid conflict, while you scrounge up materials from the environment to turn into gadgets and weapons. You can learn new crafting recipes by knocking over bases and cleaning out ambush camps, which also unlocks new fast-travel points on your map.

If a fight does go loud, you can get an early update which activates “Focus Mode,” giving you the ability to slow down time for short periods, allowing you to line up an easy headshot or two. This is utterly crucial early in the game, when you’re stuck with whatever broken-down weapons you can scrounge up, and is just a nice quality-of-life increase later on. 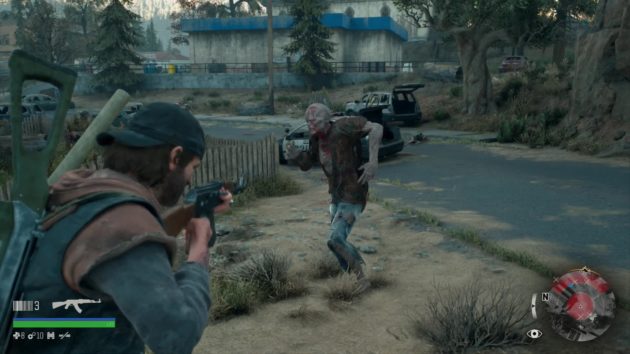 What’s impressive is that Days Gone, as noted above, does do both action and stealth reasonably well, if not remarkably. This is actually a rare thing; usually, a game that tries to thread this particular needle ends up favoring one or the other approach. In something like Watch Dogs 2, which is ostensibly trying for the same balance, the stealth is so blatantly the “right” way to play the game that getting into a gunfight feels like it’s a failure condition. Days Gone actually makes both approaches worthwhile and useful.

As noted above, though, it does play like it’s a distillation of several previously successful games, and there’s a lot here that’s strictly formula. I groaned out loud the first time the game asked me to take out an enemy stronghold, particularly since you can mark enemies from a distance with Deacon’s binoculars. It felt like I was right back in one of the recent Far Cry games, right down to the chance that random animals will wander into the ambush camp and do most of my work for me.

Side note: I’m not even sure why Days Gone has bandit camps at all, since the wilderness outside the settlements is supposed to be so dangerous that Deacon is one of the only people dumb enough to go out there. Who are these people robbing? 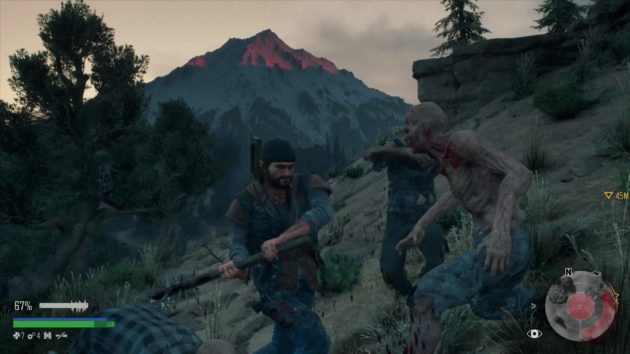 The big gimmick here, though, which sets it apart, is the Freakers, and the chance that if you aren’t careful, you’ll end up drawing a couple of hundred of them down on your location. In its best, most memorable moments, Days Gone is always one random explosion away from turning into Zombie Mardi Gras, and that constant element of risk is what makes it worth the price of admission.

To be fair, I’m an easy mark for zombie games, so take my recommendation with a grain of salt. I’d be happier with Days Gone if it focused more on the Freakers, rather than time-killing map activities like fighting bandits, and it’s decidedly unpolished. I still had a lot of fun with it, and I stayed interested all the way through because I wanted to know what would happen to Deacon. It’s well worth your time.

Editor’s note: Sony provided an early digital copy of Days Gone for the purpose of this review.