A new report from real estate company JLL finds a correlation between the real estate investment dollars spent in a community and the strength of its innovation economy. Just nine cities accounted for 37 percent of all annual real estate investments over the past decade: Boston, London, New York, Paris, San Francisco, Seattle, San Jose, Sydney, and Tokyo. Each city made it into JLL’s ranking of the top 20 most innovative cities in the world. 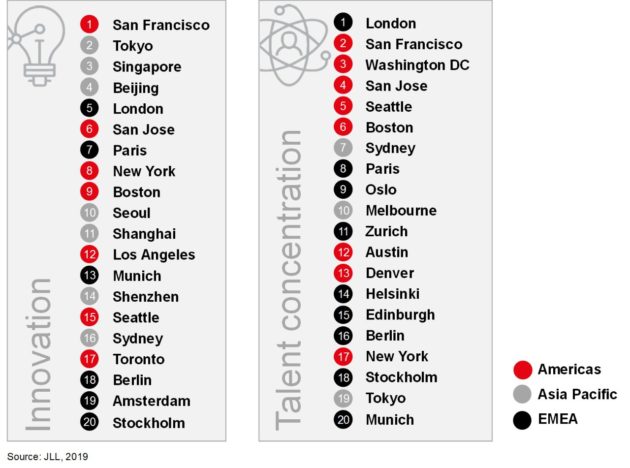 JLL studied more than 100 cities around the globe, looking at factors like venture capital activity, foreign investment in tech, spending on research and development, and patents awarded, to determine the most innovative cities. The real estate firm also looked at demographics, education institutes, and employment to rank the strength of their talent pools.

They found that tech hubs lead the pack in real estate investments — and cities with growing tech industries are rising. Real estate investments in Washington D.C., for example, have grown by 260 percent since the financial crisis. D.C. tech is expected to flourish over the next few years, driven in part by Amazon’s second headquarters project.

The report also reflects Asia’s growing tech economy. Beijing and Seoul made the top 10 most innovative cities list, joining the ranks of Tokyo and Singapore. Among U.S. cities, San Francisco tops the list and Seattle is 15th.

Real estate investors’ focus on tech cities used to be “implicit in investment strategies,” according to the report. “But it is now becoming an explicit part of strategy, and several major investors have announced that they are actively targeting innovation-oriented cities.”