It’s tax season, and some people are finding out the hard way that those so-called tax breaks that President Trump promised them aren’t coming.

Who is getting additional tax breaks this year? Corporations. The 2017 Tax Cuts and Jobs Act lowered the statutory corporate tax rate from 35 percent to 21 percent, and it’s already been widely reported that companies such as Amazon are paying zero in federal taxes this year, despite setting record-breaking profits.

Netflix is also not paying federal or state taxes despite record profits, as the Institute on Taxation and Policy reported.

If there’s one thing that gets Americans all fired up, it’s the idea that we pay too much in taxes — and where our tax dollars go.

Author Pat Garofalo decided to examine all kinds of corporate tax breaks and subsidies we hand over to the entertainment industry, retail, sports teams, and corporations in his book The Billionaire Boondoggle: How Our Politicians Let Corporations and Bigwigs Steal Our Money and Jobs.

Garofalo writes that while most people say they support better roads and schools, the reality is that many of the tax incentives governments give away go to billionaires to help them fund and build their private businesses on taxpayer dollars, with the promise of jobs and development to help the local economy that often fall flat.

A former assistant managing editor for U.S. News & World Report, Garofalo has a history examining public tax dollars and private projects, covering “all things politics and policy” and the 2016 election. Additionally, he writes about economic policy for several publications, including The Atlantic and The Guardian. 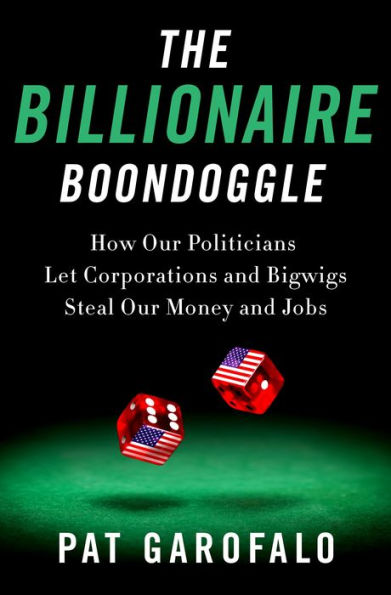 What Garofalo found after digging into several types of corporate incentives and giveaways, and talking to several economists, is cities and states that give away a lot often get very little in return, and taxpayers are all-too-often left holding the check when those sports teams or companies leave town. GeekWire spoke to Garofalo to learn more about his book and research.

GeekWire: What inspired you to tackle this immense project on tax incentives?

Pat Garofolo: It started back during the Great Recession. I saw a bunch of cities that were doing things such as closing libraries and turning off street lights, while at the same time building arenas and stadiums for billionaire sports owners.

The priorities those cities had were just wildly out of whack, given the economic situation the country was in. And the more I looked into it, the more it became clear that this wasn’t just a sports thing – it happened with movies, hotels, sporting goods stores, etc. – and that it happened because America had been sold a big myth about corporate job creation.

GW: With Amazon’s HQ2 search, you write that not only was Amazon asking for loads of tax breaks, but was telling many locales how to spend the tax dollars. Is this common, or an unprecedented move?

Garofolo: No, but what was unprecedented was the high-profile way Amazon went about its search, which ended up backfiring. The circus brought a ton of attention to the process, giving lots of folks time to examine the downsides. Compare that to the recent news that Google has been quietly hoovering up tax breaks via what are basically shell companies. No publicity, no problem. And that’s how things usually go. Quiet deals, under the radar, that taxpayers lose out on without even knowing about it.

GW: How do you feel about how the Amazon HQ2 search went? Were you surprised by their picks of New York City and Washington D.C.?

Garofolo: Not at all. Those choices revealed the folly of cities and states tripping over themselves to woo companies. After collecting data on so many cities, and wringing the “finalists” for even more information, Amazon chose the nation’s capital and the world capital of finance.

If it had been about the money, Amazon would have gone for Newark or Maryland. It left money on the table to be somewhere that made business sense. D.C. and Virginia had things that Amazon wanted, and they had nothing to do with taxes. So that money was really just a windfall, paying the company to do something it would likely have done anyway.

GW: In New York City, community groups and some politicians actually mobilized enough to make Amazon pull out. Did this surprise you? Do you think other locales will start to question corporate tax breaks now that NYC pushed back on Amazon?

Garofolo: It did surprise me. It’s not often that citizens are able to stop a bad deal like this from going through. It was really encouraging. I think it’s too soon to tell the longer term impact, but I hope it elevates awareness of how many cities and states are getting sold out.

GW: You write that Boeing pushed Washington state to give the company huge tax breaks. Tesla did the whole “search locales” thing way before Amazon. Are there any tech companies that have started major presences in areas that haven’t pushed their weight around for major tax breaks, or good examples of expansion?

Garofolo: Nothing jumps to mind. There’s the “Twitter tax break” in San Francisco, Amazon’s big tax breaks, which extend far beyond HQ2, as well as giveaways for Facebook and Google. Especially since tech was perceived as a promising way to create jobs when states were seeing their manufacturing bases vanish, it’s a sector that tends to benefit from incentives.

The extent to which the big myth about corporate tax breaks snuck into so many sectors was eye opening.

GW: You look at the economics of corporations offering incentives — the promise of jobs, new business growth, better infrastructure — and fail to find it. Did this surprise you that these types of promises haven’t had any significant impact anywhere? Or have they?

Garofolo: No, I knew going into the project that the evidence was pretty one-sided as to the effectiveness of subsidies. The surprising thing was the sort of stuff cities were getting into, such as outright owning hotels or giving billions of dollars to Bass Pro Shops. The extent to which the big myth about corporate tax breaks snuck into so many sectors was eye opening.

GW: Seattle just signed on its first NHL team. As part of the deal, it is renovating KeyArena and not asking taxpayers to completely fund it. What is great about this deal for Seattle? And what is still problematic?

Garofolo: Grading on a curve, it’s certainly better, since the city isn’t paying for construction or locked into some awful, long-term lease like the one St. Louis wound up in, which resulted in it continuing to pay for a stadium with no team after the Rams left for Los Angeles.

But it’s still not great that the arena gets a big break on property taxes. Las Vegas managed to build a privately-financed hockey arena for the Golden Knights, so there’s no reason for other cities to not force owners to do the same thing.

GW: Americans are so in bed with this idea that investment in corporations will create more better-paying jobs and “trickle-down” economics. Is there any way of changing people’s mindsets about this?

Garofolo: A couple of years ago, I would have been more skeptical, but the Amazon HQ2 debate was encouraging, as was Boston saying no to the 2020 Olympics. That President Trump gets personally involved in deals that go sideways — think Carrier or Foxconn — also helps bring attention and opposition to them. Hopefully this isn’t the high point of opposition, but the beginning of something more sustained.

GW: It’s tax season. Many people are seeing that the 2017 tax breaks aren’t working in their favor. Do you think heading into this next major political season that the backlash, especially being fueled by the Democrats focusing on a Green Deal, and more investment in healthcare and infrastructure, will have an impact on the next presidential run?

Garofolo: It’s certainly possible, though I think anyone who thinks they can prognosticate about what the election will be about this far out is making stuff up.

One thing we do know is that Americans across the political spectrum consistently say that they think the rich and corporations are paying too little in taxes. So if I were, for some bizarre reason, advising a candidate, I would say lean into it.

The Billionaire Boondoggle: How Our Politicians Let Corporations and Bigwigs Steal Our Money and Jobs is out now.