The clock is ticking on the current generation of gaming consoles, and as Microsoft gets ready to release its next entry a little over a year from now, the tech giant’s gaming division is starting to stagnate.

Its gaming arm, which includes everything from Xbox hardware to Xbox Live subscriptions to revenue from games made by Microsoft as well as other studios, was the only major unit to see a drop in revenue in what was otherwise a strong cap on a record fiscal year for the tech giant.

Gaming revenue dropped 10 percent year-over-year to $2.05 billion in the quarter. The plunge was driven by a 48 percent decrease in Xbox hardware sales.

Despite the down quarter, Microsoft’s gaming revenue rose nearly 10 percent to $11.4 billion for the 2019 fiscal year, thanks to a strong holiday season. 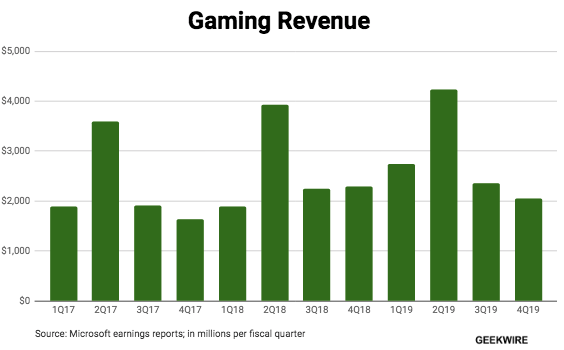 On a call with investors, Microsoft CFO Amy Hood said the company expects another drop in gaming revenue in the next quarter, as the trend of declining console sales should continue, especially without any hugely popular titles on the way. Last year around this time, console sales got a bump thanks in part to the Fortnite craze.

“We expect gaming revenue to decline at a similar rate year-over-year to Q4 as we move through the end of this console generation,” Hood said on a call with investors.

It’s not just Microsoft feeling the pain of falling hardware sales. According to market research firm NPD Group, game console spending is down 20 percent so far this year, and the only device seeing year-over-year growth is the newer Nintendo Switch. Hardware spend in June dipped 33 percent year-over-year to $235 million, NPD reported today.

At the big E3 gaming conference last month, Microsoft announced plans for a next-generation console, Project Scarlett, to be released in the 2020 holiday season. The PlayStation 5, Sony’s next gaming console, is also expected to come out in late 2020.

The announcement essentially makes the current crop of devices lame duck consoles. With new generations coming soon, getting people to spend hundreds of dollars on an Xbox right now becomes a tough sell.

Microsoft’s gaming strategy has shifted in recent years, and the console is no longer the be-all-end-all for the division. The company line has become that Microsoft wants to meet the world’s 2 billion gamers where they play, whether that is on an Xbox, PC, smartphone, or even, potentially, a rival console. 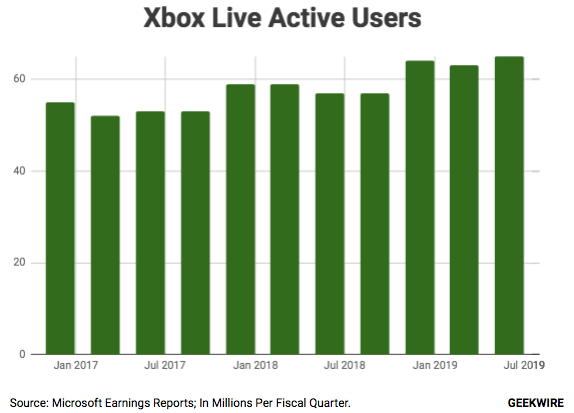 The Game Pass subscription service, which recently debuted on PCs, is a great example. So is Xbox Live, where the number of users jumped from 57 million a year ago to 65 million in the most recent quarter. Xbox Live growth could accelerate in the near future, as Microsoft recently extended the online community to smartphones and other devices.

This fall, Microsoft will begin trials of Project xCloud, the ambitious cloud-powered game streaming service. Microsoft is betting it can take games such as Halo, which have always required powerful consoles to run, and move all that processing to the cloud, allowing users to play these games on their phones and elsewhere. If it can pull that off, the tech giant could open itself up to a huge new audience and usher in a tectonic shift in the gaming industry.

“I feel we are well positioned for what is going to be a much larger market than the traditional gaming market,” Microsoft CEO Satya Nadella said on the investor call.