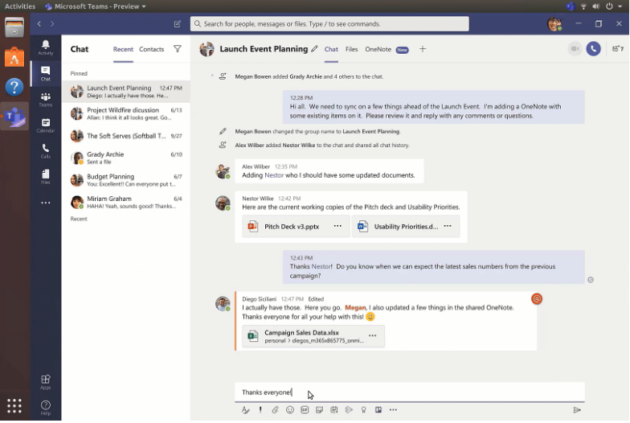 Microsoft today made Microsoft Teams workplace communication app for Linux available in a public preview. It’s the first Microsoft 365 app for Linux desktops, the company said in a blog post. The preview is available to download in .deb and .rpm formats here. This is the latest example of Microsoft embracing Linux.

“I’m really excited about the availability of Microsoft Teams for Linux,” Jim, Zemlin, executive director at The Linux Foundation, said in a statement. “With this announcement, Microsoft is bringing its hub for teamwork to Linux. I’m thrilled to see Microsoft’s recognition of how companies and educational institutions alike are using Linux to transform their work culture.”

Microsoft said last month that Microsoft Teams had grown to 20 million daily users, a 50 percent bump in just four months. Teams is already available for Windows, Mac, iOS, Android, and the web. It competes with Slack, which already has a Linux client.