It’s one thing to be scared, as parents, about some of the technology our kids are using. Distracting a child with a smartphone can lead to conversations about everything from how much screen time is too much to what kind of privacy risk we’ve just created.

But the dynamic shifts a bit when it’s the kids who are scared of the tech.

New research from the University of Washington aims to define for the first time just what children mean when they say technology is “creepy.” The findings were presented earlier this month at the ACM CHI conference on Human Factors in Computing Systems in Glasgow, Scotland.

And this isn’t just about coming across creepy people on the internet, but rather kids in the UW study use the word creepy to describe tech itself, as something that is unpredictable or poses an ambiguous threat that might cause physical harm or threaten an important relationship.

“Over the years of working with kids we realized they use the word ‘creepy’ a lot as a way to reject specific technologies,” first author Jason Yip, an assistant professor in the UW’s Information School, said in a news release. “But kids have a difficult time articulating what makes something creepy. So we designed a series of activities to give them the chance to work out their own thoughts and help us understand.”

The research team conducted design sessions with 11 children ages 7 to 11 in which they were tasked with ranking real or imagined technologies as “creepy,” “not creepy,” or “don’t know.” The UW said that devices that could bring about physical harm or disrupt an important relationship were most consistently ranked as being creepy.

According to Yip, it’s not about some specific monstrosity coming after them, the threats are more nuanced and kids end up not sure about the consequences of their actions.

Here’s a breakdown of five technological properties that drove fear in children, as described by the UW.

Trusted adults can also play a big part in whether or not children find specific devices to be creepy. One child in the study deemed smartphones “not creepy” because he saw his parents using them, the UW said, and another thought that laptops were creepy because his parents taped a piece of paper over the camera to “keep the robbers away.”

Graphics created by the researchers, below, show sample questions for parents to use for conversations with their kids as well as questions for designers to use when creating technology for kids. 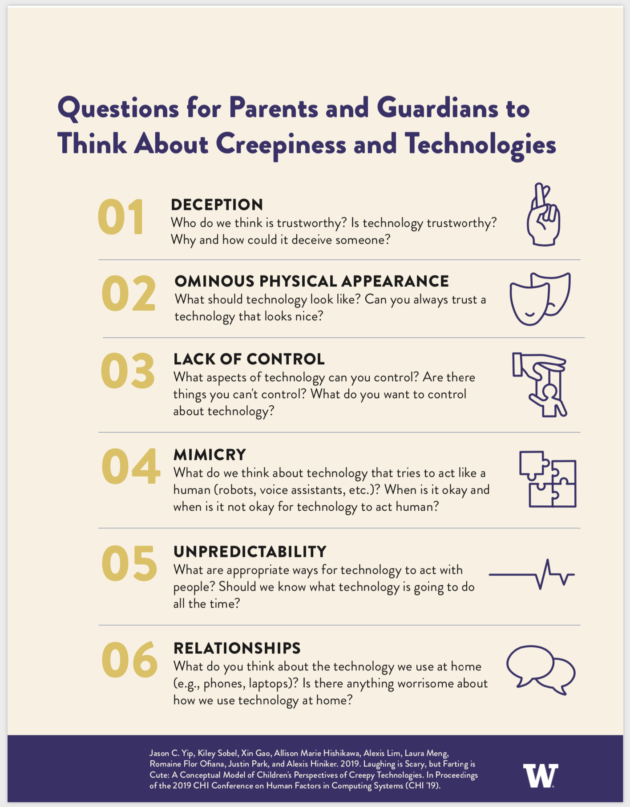