Savage, Md.-based LTN Global sells broadcast-quality IP video transport services. It will use the acquisition to help give customers more ways to distribute their video.

Founded in 2016, Make.TV’s cloud-based technology acts like a video router of sorts, allowing companies to take live video from a variety of sources and deliver it to any device on any platform. It automates various tasks within that process, such as sifting through data, identifying content libraries, routing content to post-production houses, and more.

Customers include MLBAM, NBC Universal, Al Jazeera, Viacom, Fox Sports Brasil, and others such as ESL, the world’s largest esports organization that runs competitions across the world and produces more than 1,500 hours of content annually.

The company, which relocated from Germany to Seattle two years ago, was backed by some of the top investment firms in the Pacific Northwest including Microsoft’s M12, Vulcan Capital, and Voyager Capital, which led a $8.5 million Series A round in June 2017. Bruce Chizen, the former CEO of Adobe and a venture partner at Voyager, is on the company’s board.

Make.TV is led by Andreas Jacobi, a serial entrepreneur who is the company’s co-founder and CEO. He started Make.TV with longtime business partner André Schnitzler.

“Being part of LTN Global will significantly enhance the services we can provide to customers, who now can acquire, deliver, and curate content via the most advanced transport solution available,” Jacobi said in a statement. “In uniting these technologies, we can bring customers the benefit of considerable efficiencies and value-added workflows, allowing them to rapidly create and deliver more content to more viewers.”

We’ve followed up with Jacobi for more details about the deal and will update this post when we hear back. 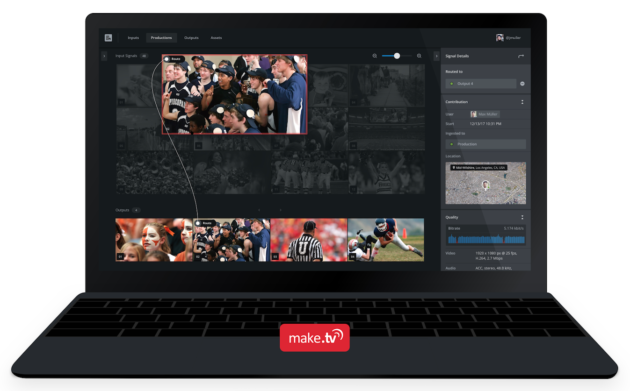 “The integration of Make.TV’s cloud-based services into our managed IP production and transmission workflows gives customers even greater control and agility in executing live video creation, distribution, and monetization,” Malik Khan, co-founder and executive chairman at LTN Global, said in a statement.

Erik Benson, managing partner at Voyager — which also invested in Elemental — called the acquisition a “great outcome for Make.TV’s employees, customers and investors.”

“With Make.TV, as with Elemental, Voyager was lucky to be able to work with another trio of visionary leaders Andreas Jacobi, [COO] Tricia Iboshi and [CRO] Joseph Hopkins,” Benson told GeekWire.

LTN Global announced another acquisition in July when it said it would buy Crystal, also a broadcast video tech startup, and swooped up Niles Media Group in March.