LinkedIn can be a valuable resource for hiring managers sourcing potential candidates. But oftentimes it isn’t enough — and that’s where SeekOut is stepping in.

The Seattle-area startup today announced a $6 million investment round led by Madrona Venture Group, with participation from Mayfield. The company helps HR departments by using swaths of data to provide an AI-powered “360-degree profile” of potential candidates — particularly those that have sparse or no LinkedIn profiles, but may be qualified based on harder-to-find accolades.

Their company is an evolution of Nextio, a professional messaging service formerly known as Telo that Gupta and Bala founded. The premise of Nextio was to give recipients of promotional LinkedIn messages money paid by marketers, recruiters and others seeking to reach them. Microsoft acquired LinkedIn for $26.2 billion in 2016 — one year after Gupta and Bala left the company.

While Nextio never took off, there was a “career insights” feature that analyzed millions of resumes to give users a birds-eye view of potential career paths and the necessary steps to achieve certain jobs. That garnered interest from recruiters who wanted to understand requirements for various roles at companies; how people moved from different jobs; and so forth. About 18 months ago, Nextio pivoted to SeekOut.

“Since then the growth and traction has been phenomenal, and we are truly humbled and energized about serving this critical need for companies,” Gupta said. 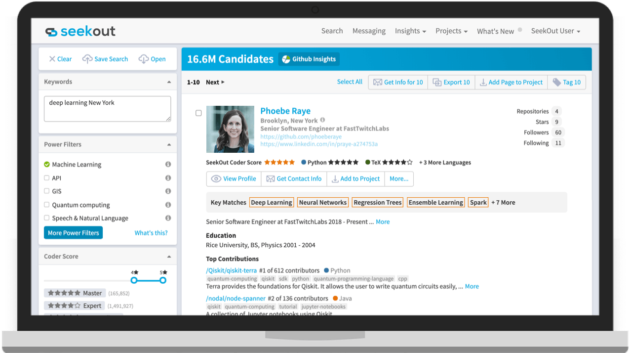 SeekOut’s thesis is that developers and engineers often don’t promote their experience or work on a LinkedIn profile, but may do so in a place such as GitHub or in research papers and patents.

But sourcing potential hires based on public data is only one part of the company’s business. SeekOut also provides built-in diversity filters to help reduce unconscious bias; a machine learning-driven search engine that understands past hiring patterns and needs based on job descriptions; and the ability for recruiters to “hyper-personalize” messages when engaging with candidates. The company’s focus on sourcing diverse talent is similar to Seattle startup Textio, which bills its “augmented writing” platform as a way to help companies create better job postings.

“Our secret sauce is that we are engineering leaders who have tons of experience hiring tech talent for our teams and with challenges our recruiters faced,” Gupta said. “We also know of data available and how to apply machine learning, natural language processing and other technologies to the problem that we and our customers face every day: finding qualified candidates.”

SeekOut competes against a flurry of existing hiring-related tools, from giants such as LinkedIn itself and Workday, to smaller startups including fellow Seattle company Karat.

Gupta said that most competing HR tech tools are spread over a wide range of tasks, such as chatbots or candidate scheduling. “The companies in the sourcing space where SeekOut focuses are fewer, and less mature,” he said.

Gupta and Bala both left Microsoft in November 2015 and came up with the Nextio idea in early 2016. SeekOut has raised $8.2 million to date. The company employs 12 people and expects to double headcount this year.

As a result of the funding, Madrona Managing Director S. “Soma” Somasegar will join the board.

“As every company goes through the digital transformation, the need for technical talent is growing leaps and bounds,” he said. “The SeekOut team deeply understands these challenges and has the expertise and drive to address them.”