Hettich came to LeoStella from Kirkland, Wash.-based Astronics Advanced Electronic Systems, where he served as vice president for 19 years.

For the past few weeks, he’s been learning the ropes at the Tukwila development and manufacturing facility from Chris Chautard, who stepped down from the CEO post and is returning to his home base at Thales Alenia Space in France. In an interview, Hettich joked that “chief learning officer” came the closest to describing his role during the transition.

LeoStella is a 50-50 joint venture of Thales Alenia Space, a French-Italian aerospace venture, and Seattle-based Spaceflight Industries. The company was created as part of a $150 million deal involving the two companies plus Italy’s Telespazio.

Its top priority is to build satellites the size of filing cabinets for BlackSky, a subsidiary of Spaceflight Industries that is developing a constellation of Earth-observing satellites as well as a software platform to deliver satellite imagery and other sorts of geospatial intelligence.

Two of BlackSky’s Global satellites, built before LeoStella entered the picture, have already been put into orbit. LeoStella’s team is finishing up the work on the next two satellites, and then the company will turn out 20 more satellites for the constellation.

BlackSky aims to have 16 satellites in its constellation by early 2021, and eventually build up the orbiting array to a full complement of 60 satellites. The satellites are designed for a service life of 36 months, which means LeoStella will have to replenish satellites over the life cycle.

Hettich said LeoStella has lined up other satellite business as well, although he declined to provide details about the customers. About 34 employees are currently working at the venture’s headquarters, located in a Tukwila office park, and a good number of them focus on spacecraft design.

“A lot of the press has talked about this being a manufacturing facility,” Hettich said. “This is far beyond manufacturing. This is a turnkey facility. … We can do from design to test.” 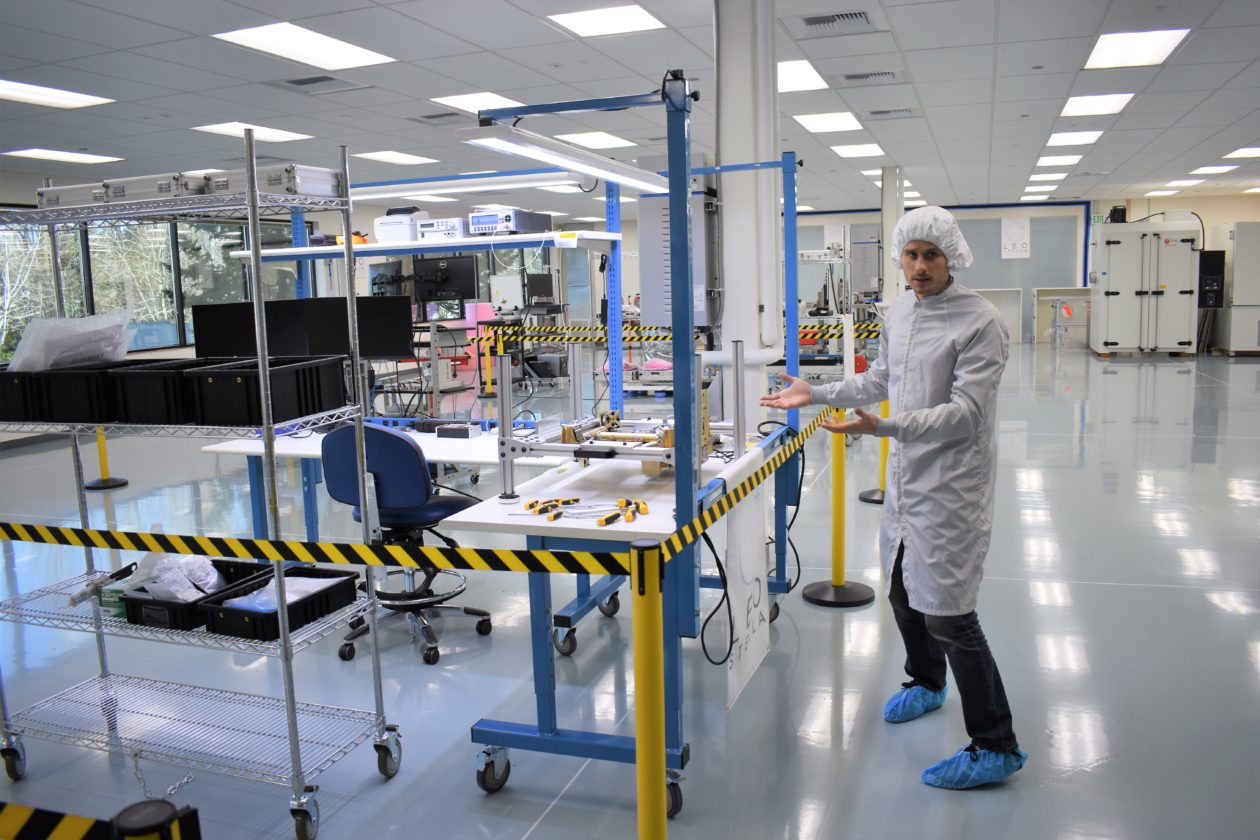 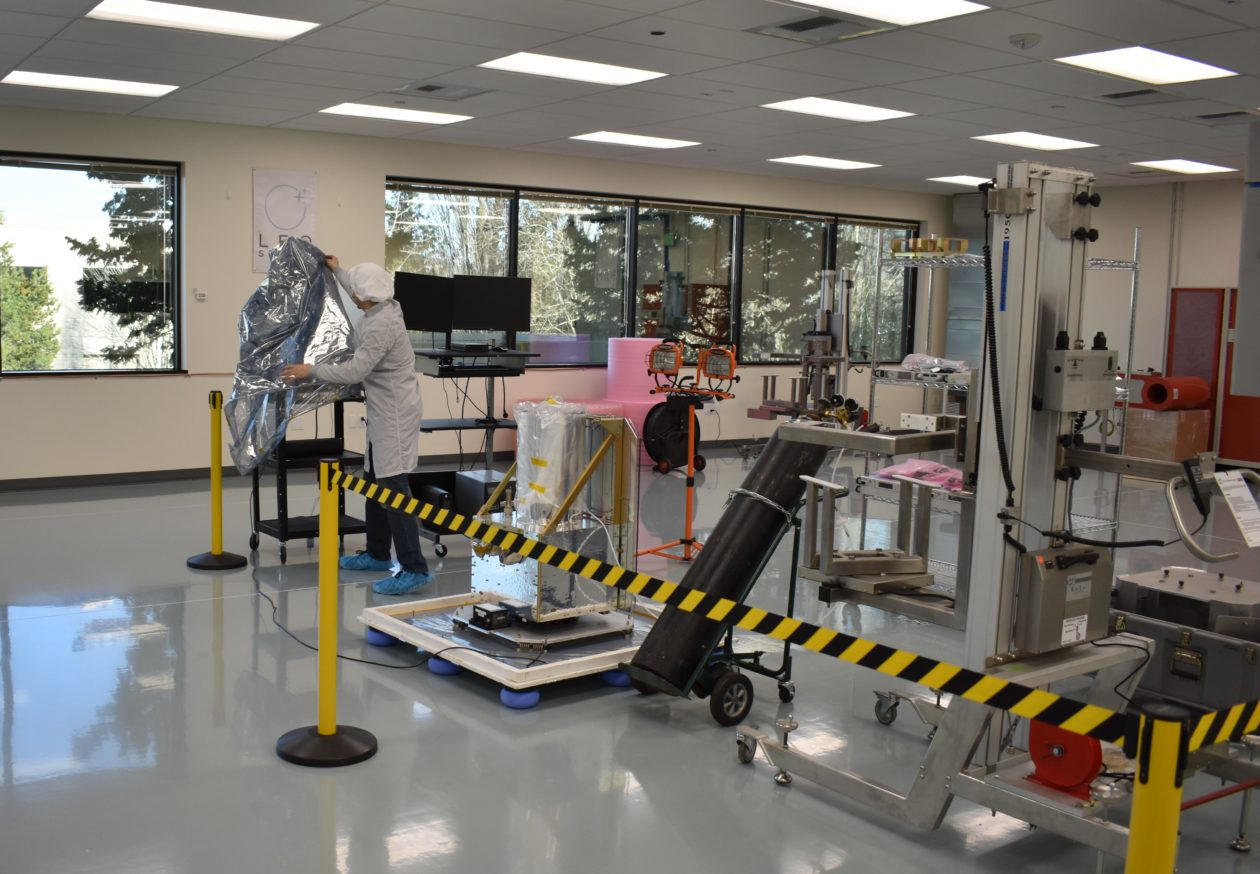 A largely completed BlackSky Global satellite sits on a stand that’s visible at the center of this image. (GeekWire Photo / Alan Boyle) 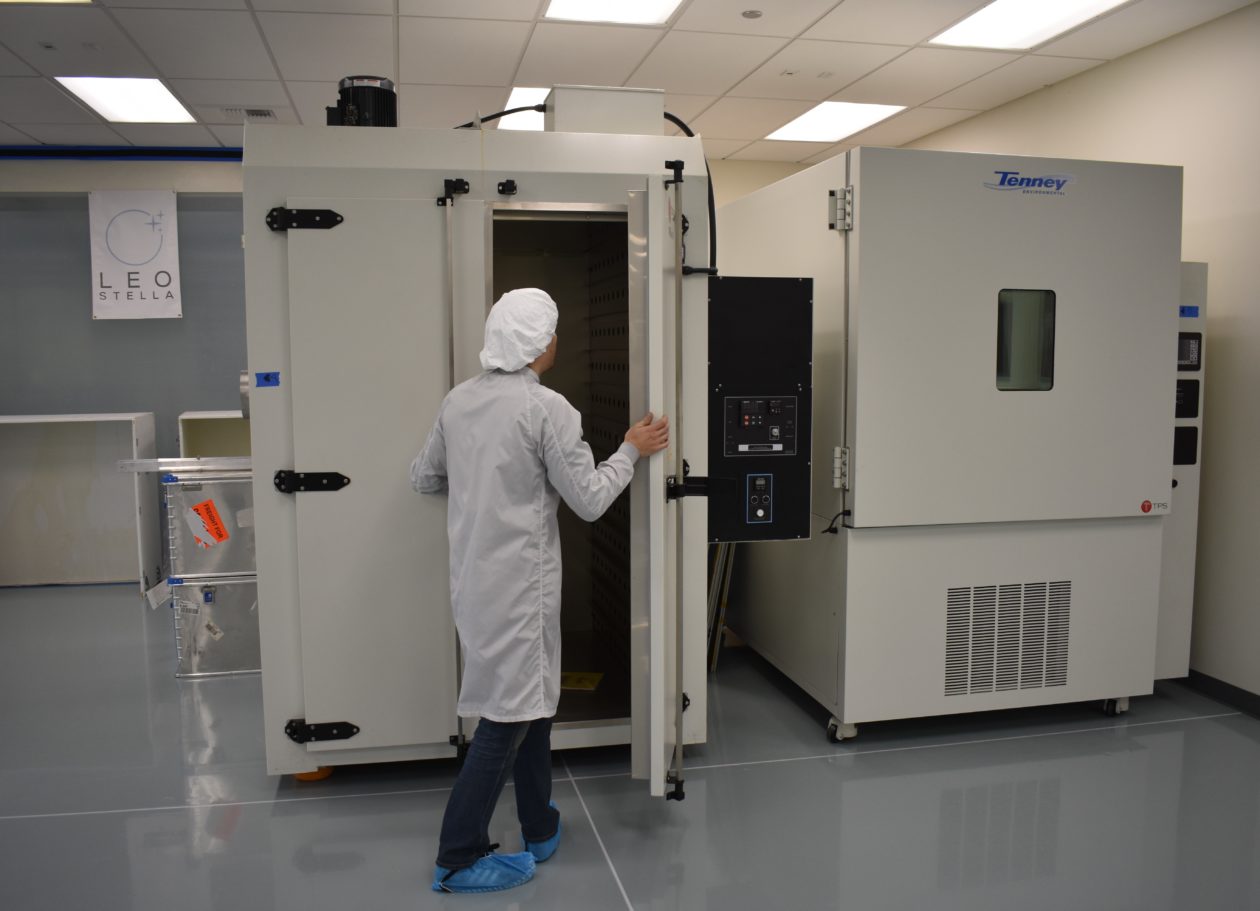 LeoStella’s Andrew Reibstein opens up one of the thermal chambers where satellites will be tested. “You can make a lot of pizzas,” he joked. (GeekWire Photo / Alan Boyle) 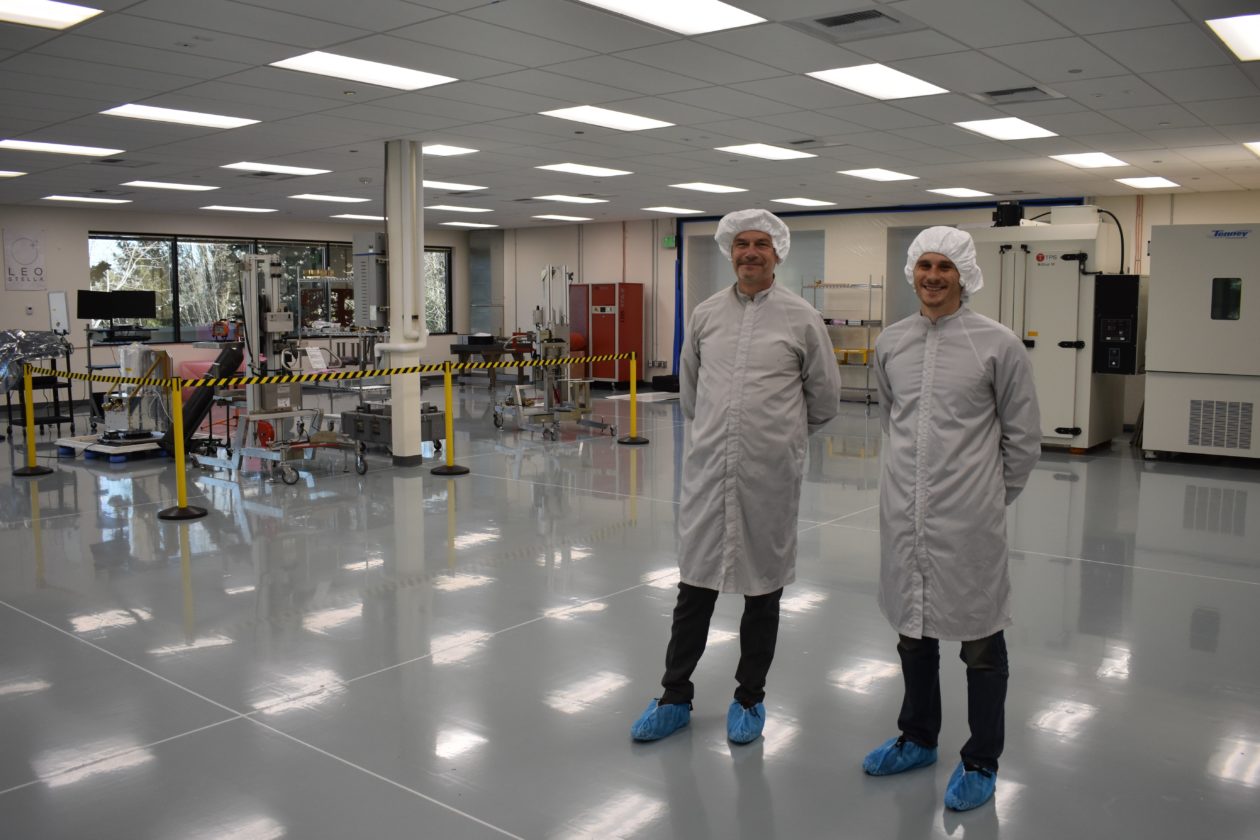 LeoStella’s facility has lots of room for expansion, in the office space as well as on the shop floor. “Obviously this is more than what is just needed for BlackSky,” Chautard said. “You see the potential to manufacture other satellites for other customers. That was really on purpose.”

Chautard said the sweet spot for LeoStella’s satellite offerings will be in the range of 50 to 150 kilograms (110 to 330 pounds), and could go as heavy as 300 kilograms (660 pounds). That’s a weight range that fits between the shoebox-sized CubeSats that are popular for research purposes and the heavyweight satellites that Thales Alenia Space builds for customers ranging from the European Space Agency to Iridium.

“However, what is unique about LeoStella is that we can dig into this huge engineering force that Thales has,” he said. “And we do that. … Whenever we have a problem to solve, or some skill that is missing on our team, we can very easily pick up the phone and have someone in Thales help us.”

All that collaboration makes the job easier for a chief learning officer.

“I’ve transitioned a couple of times, where I’ve walked into a … more troubled area, let’s say. Chris and the team have built something where I’m actually inheriting a very solid foundation. It’s not a turnaround. Everything’s in place. There is a transition, and there is a bit of ‘drinking from the firehose’ as far as just learning, but this is set up well. The team is highly skilled,” Hettich said. “This is actually a pretty smooth transition, and I have to thank Chris for that.

“I wouldn’t have left without leaving you a good foundation,” Chautard told Hettich, with a smile on his face.