KENT, Wash. — The City of Kent’s newest lunar rover wouldn’t stand up to the radiation-blasted conditions on the surface of the moon, but it’s designed to endure a testing ground that’s nearly as harsh: a park playground.

A kid-friendly reproduction of the moon buggies that transported astronauts around the lunar surface during the Apollo 15, 16 and 17 missions of 1971-1972 had its unveiling on Thursday night here at the Accesso Showare Center, which more typically plays host to the Seattle Thunderbirds’ hockey games.

Boeing historian and archivist Mike Lombardi says the rover is a slapshot score.

“Two thumbs up,” he told GeekWire. “It’s a wonderful replica.”

That’s high praise, considering that Boeing built and tested the real-life lunar rovers for NASA in Kent. Three of the two-seated contraptions are still sitting on the lunar surface, and won landmark status from King County in July by virtue of their Kent connection. State historical status is due to be sought for the rovers next March.

There are a few test models of the rovers on display at museums around the world, including Seattle’s Museum of Flight. But no one would dare try sitting on those artifacts. In contrast, Kent’s rover replica, built by Minnesota-based Cre8Play at a cost of almost $125,000, is designed to be climbed over.

The rover, as well as a playground lunar lander and an astronaut photo-op mannequin, are to be installed in Kherson Park, a half-acre plot of city land that’s due for renovation.

Kent Mayor Dana Ralph told GeekWire that the cost of renovation is estimated at $1.25 million. There’s a fundraising campaign underway to cover the expense, led by the Kent Downtown Partnership and the City of Kent. Thursday night’s news was that the Kent Lions Club is donating $10,000 to the cause. If the campaign meets expectations, the moon-themed park could open by 2022, the 50th anniversary of Apollo 17’s last moon buggy ride.

In the meantime, backers of the effort plan to display the rover replica indoors.

“The lunar rover is about celebrating where we came from, and inspiring us about where we’re going,” Ralph said. “So between Boeing and companies like Blue Origin, we’re covering 50 years of space exploration.”

Ralph sees a lot of significance in the fact that Blue Origin, the space venture founded by Amazon CEO Jeff Bezos, is headquartered in Kent. “They’re going back to the moon, and they’re going to be doing that with kids who are hopefully inspired by this history,” she said. 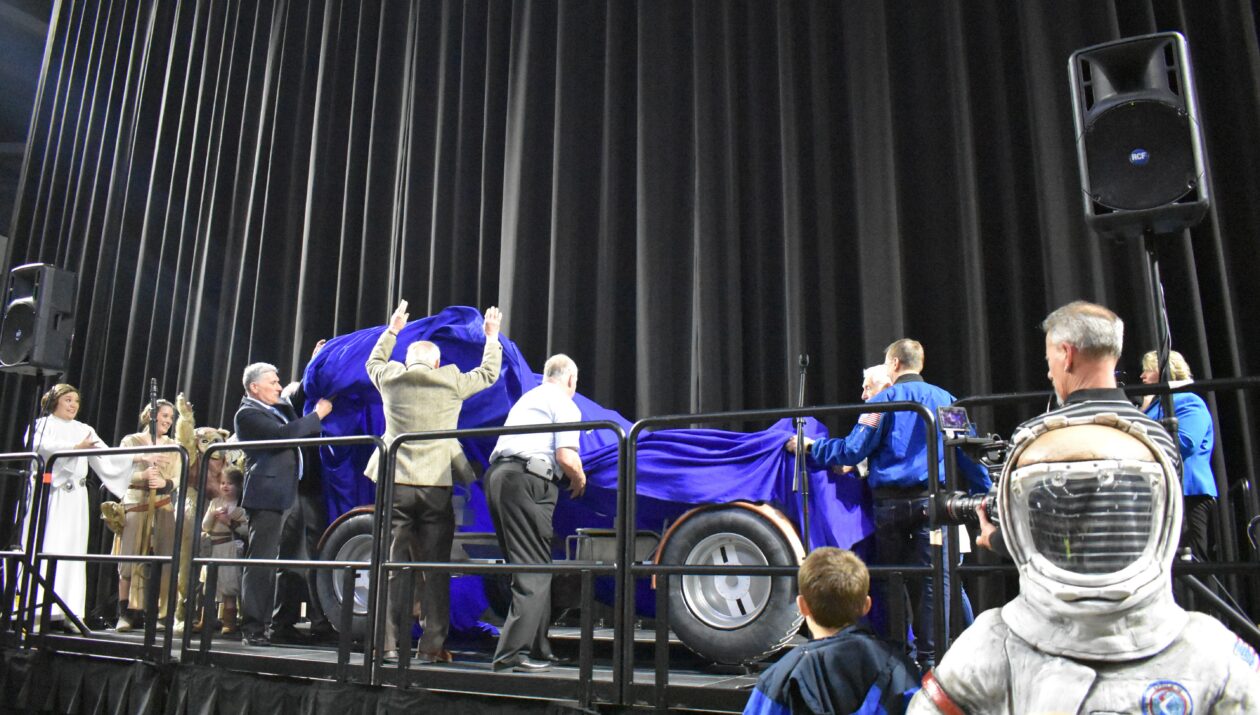 Boeing retirees and other VIPs pull the wraps off a lunar rover replica as Kent Mayor Dana Ralph and members of a Star Wars costuming group look on. (GeekWire Photo / Alan Boyle) 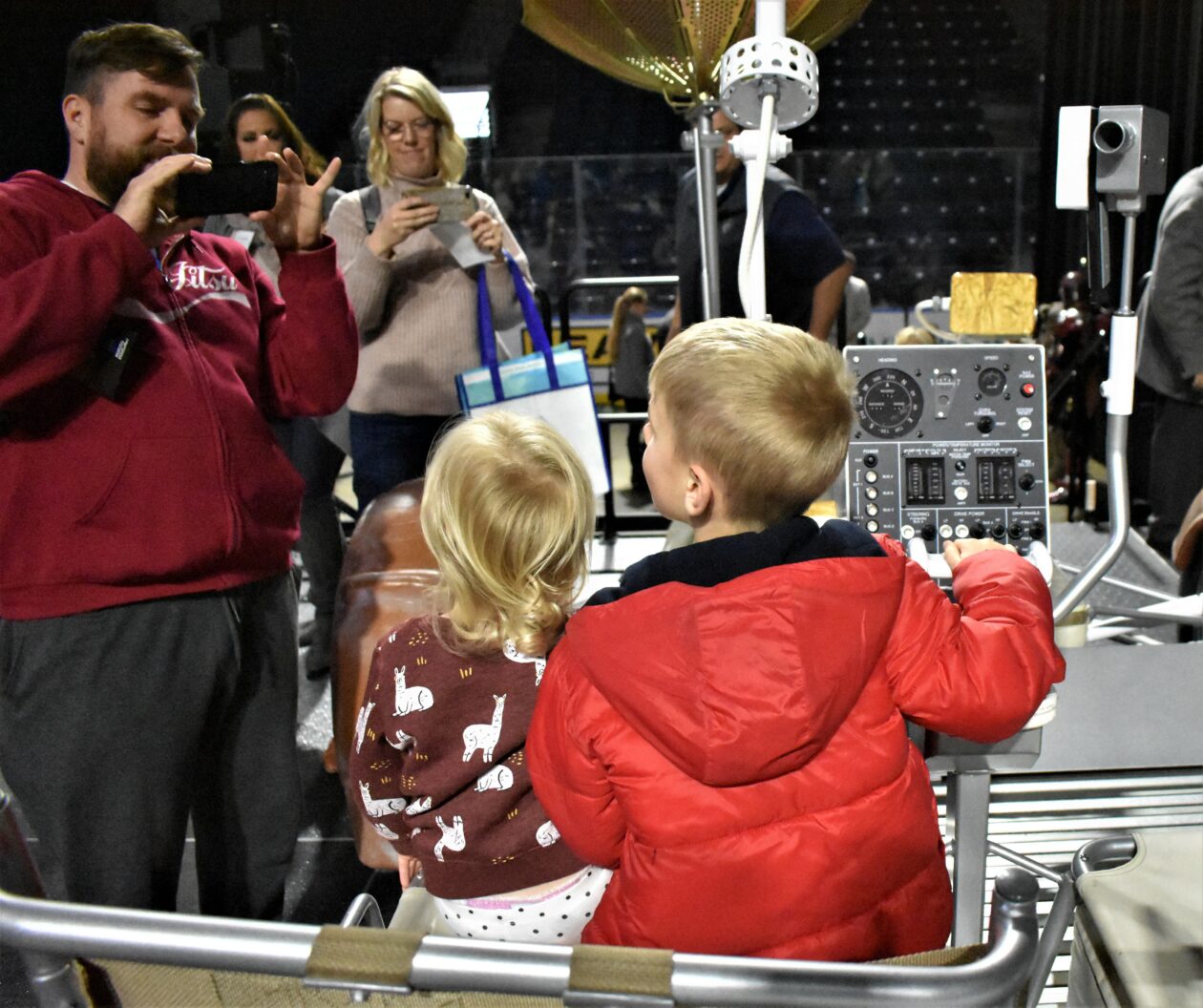 Jake and Emily Hawken of Kent, Wash., take pictures of their kids as they sit at the controls of the lunar rover replica. (GeekWire Photo / Alan Boyle) 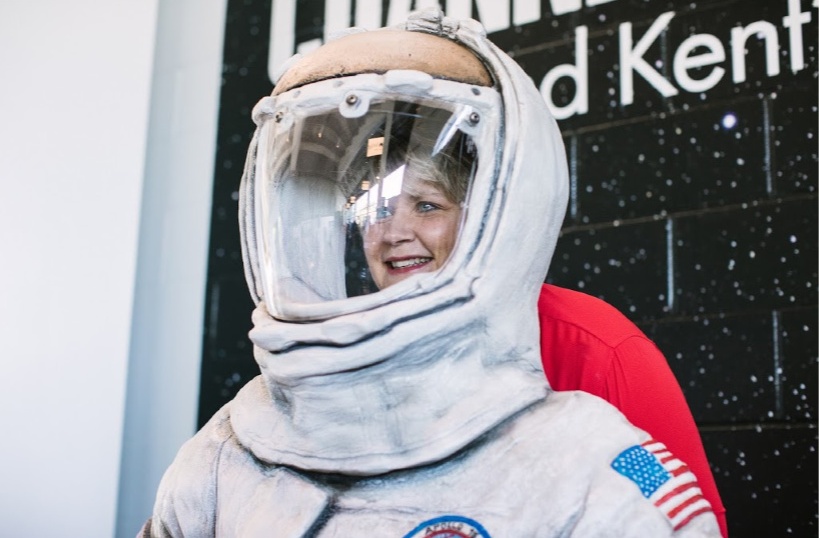 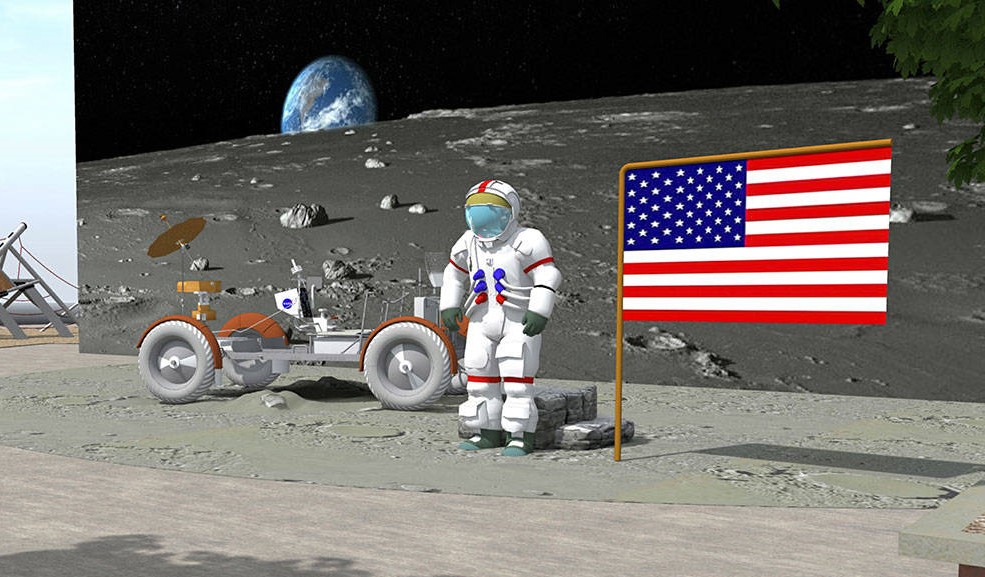 This illustration shows an early concept for the placement of a lunar rover replica and an astronaut mannequin at Kent’s Kherson Park. (Northwest Playground Equipment / Playworld Illustration) 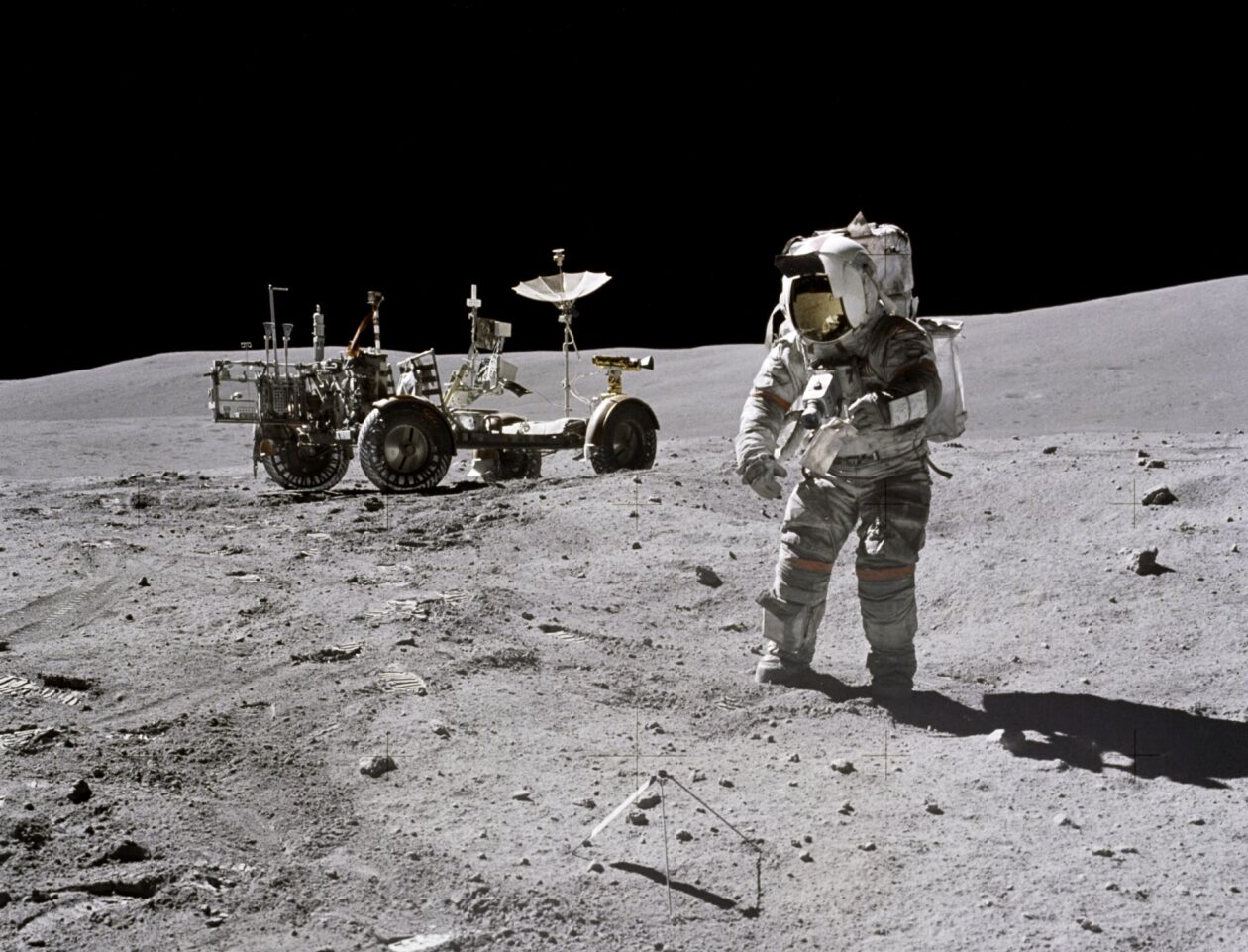 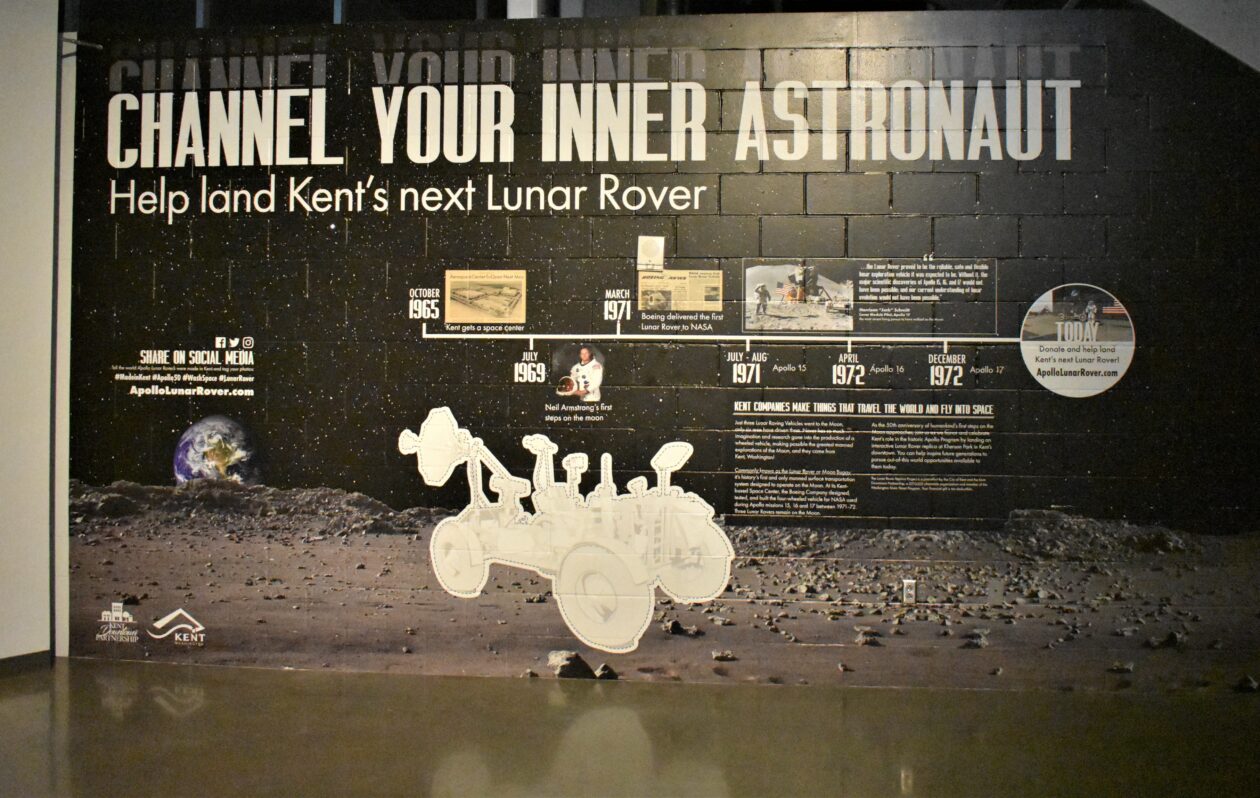 More than 500 people, including lots of families with kids, showed up for Thursday’s rover unveiling. When they weren’t taking turns sitting in the rover’s seats, youngsters checked out FIRST Robotics’ mini-rovers and browsed booths staffed by the Museum of Flight, Pacific Science Center, Washington Hyperloop, Boeing, the Seattle Astronomical Society and other tech-centric groups.

Blue Origin set up a table where kids could fill out “Club for the Future” postcards that’ll be flown to space and returned. One of the stars of the show was Greg “Ray J” Johnson, a Seattle native who served as a shuttle astronaut and now heads Blue Origin’s New Shepard suborbital space program.

Johnson said he’s “all in” on the inspirational value of Kent’s rover celebration.

“I’m excited to see kids sit on the rover, because nobody got to sit on a rover except those astronauts,” he said. “The fact that you build a rover you can put out in the Seattle weather, and then sit on? I mean, it turns the kids’ imagination on fire.”