WASHINGTON, D.C. — Amazon billionaire Jeff Bezos today laid out the architecture for missions to the moon aimed at supporting NASA’s goal of landing astronauts on the lunar surface by 2024.

The game plan for Bezos’ space venture, Blue Origin, calls for continuing work on the company’s Blue Moon lunar lander and a new breed of hydrogen-fueled rocket engine known as the BE-7. Blue Origin has been discussing the lander concept with NASA for years, and plans to propose Blue Moon in response to a solicitation that NASA is due to issue this month.

During today’s invitation-only event here at the Washington Convention Center, Bezos said that sending humans to the moon by 2024 and establishing a permanent lunar settlement would be in sync with his own vision for humanity’s future in space.

“I love this — it’s the right thing to do,” Bezos said. “We can help meet that timeline, but only because we started this three years ago. It’s time to go back to the moon, this time to stay.”

“People are very excited about this capability,” Bezos said.

The showstopper came when Bezos pulled the wraps off a full-size mockup of the Blue Moon lander. “This is an incredible vehicle, and it’s going to the moon,” he said.

A cargo version of lander could deliver 3.6 metric tons of payload to the lunar surface, while a “stretch tank” version of the craft could put 6.5 metric tons on the moon. Bezos said the stretch version would provide enough carrying capacity to accommodate astronauts.

The stretch lander was shown with an ascent vehicle on top, while an illustration of the cargo lander had a set of four rovers sitting on top. Blue Moon would be equipped with a crane system, or davit, to lower payloads from the lander’s deck to the surface.

Both versions would be equipped with a single BE-7 engine, capable of 10,000 pounds of thrust. Bezos said hot-fire tests of the BE-7 are due to begin this summer. 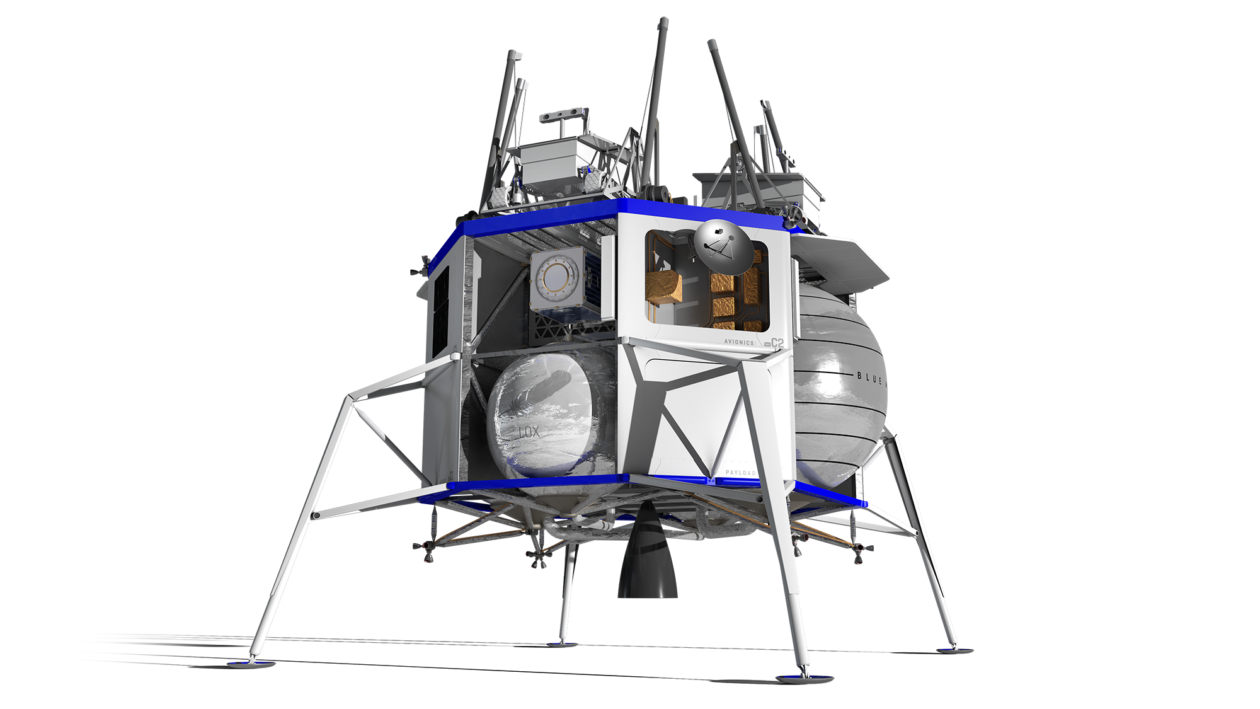 An artist’s conception shows the cargo version of the Blue Moon lander with rovers sitting on the top deck. (Blue Origin Illustration) 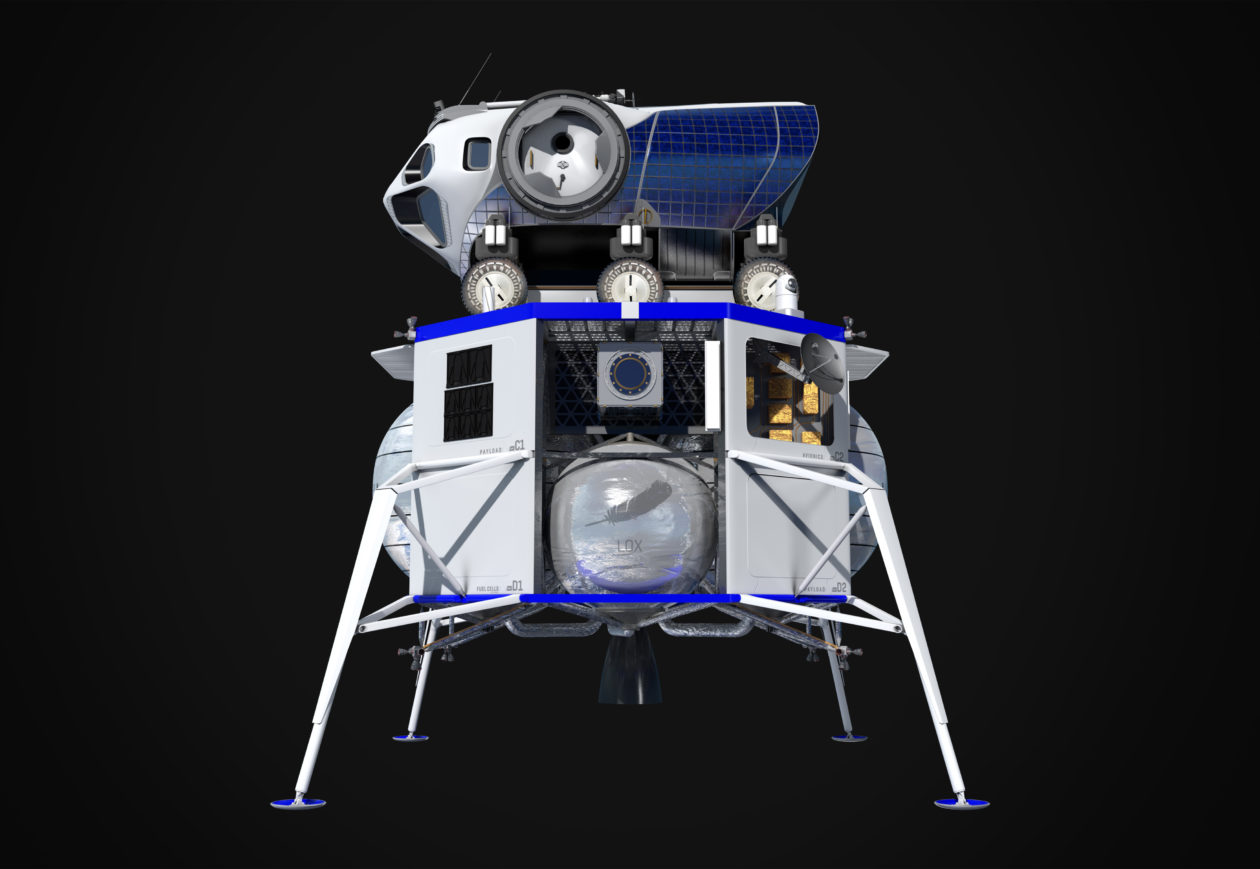 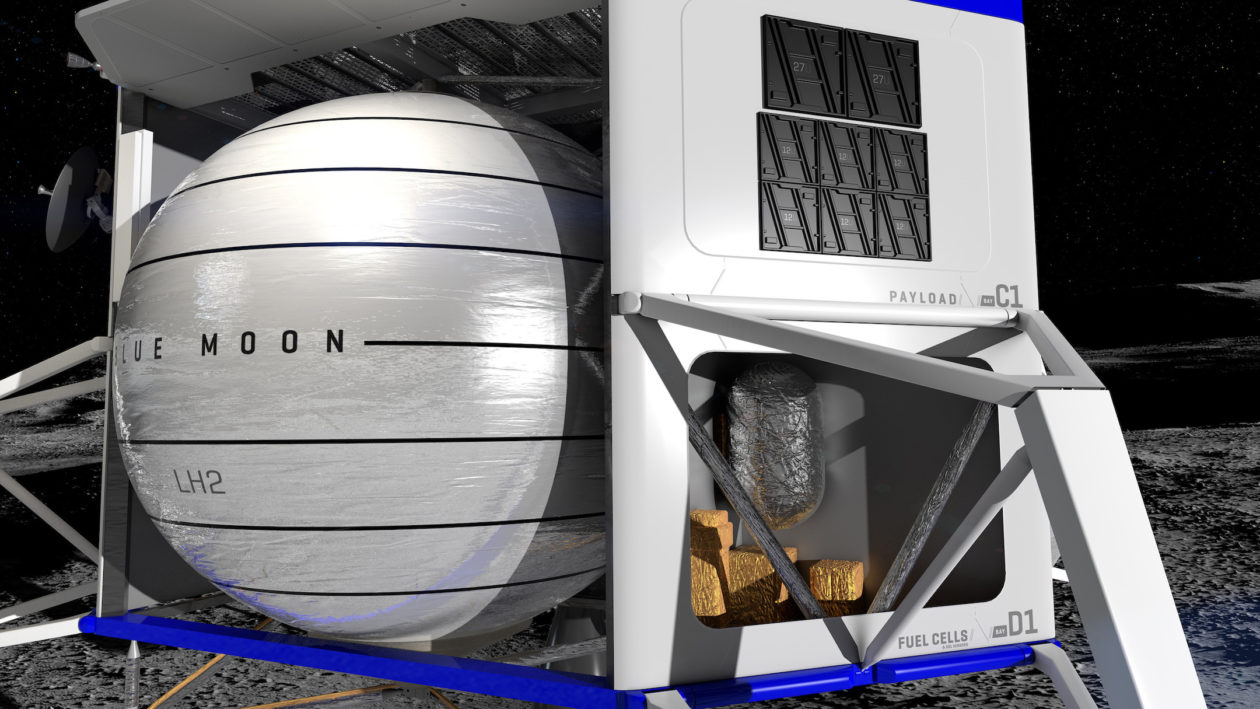 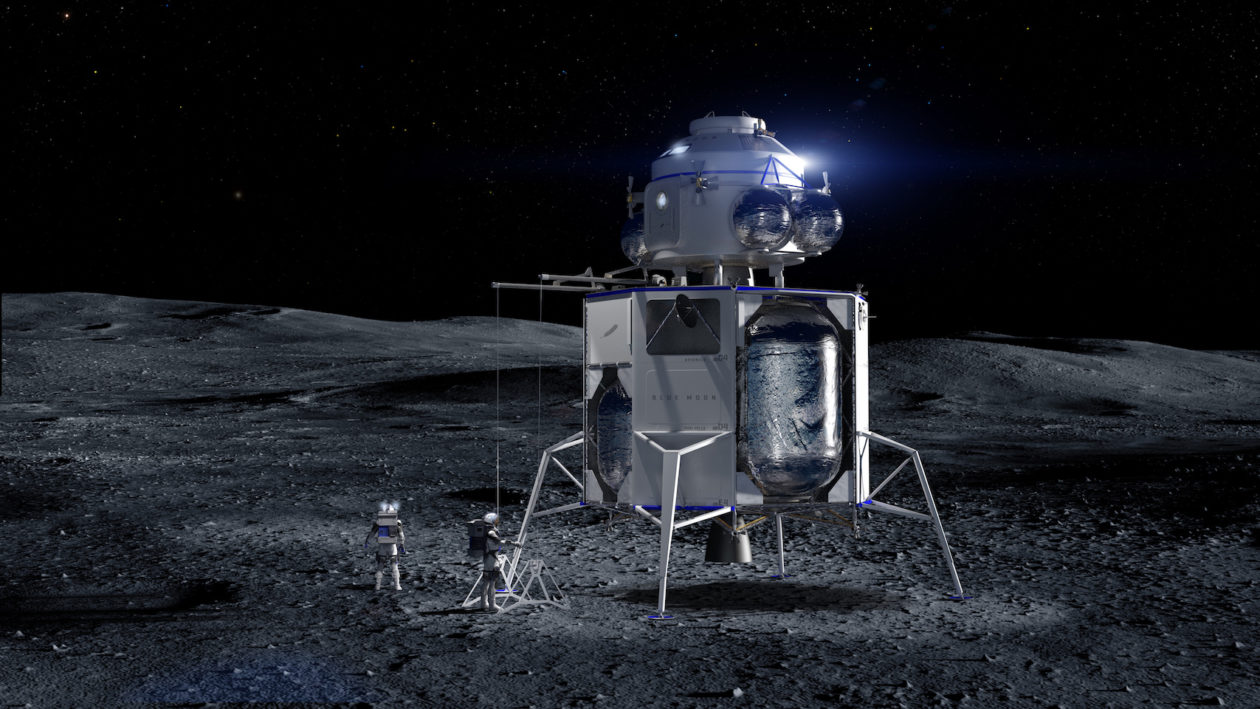 A stretch version of the Blue Moon lander can accommodate astronauts and an ascent vehicle. (Blue Origin Illustration) 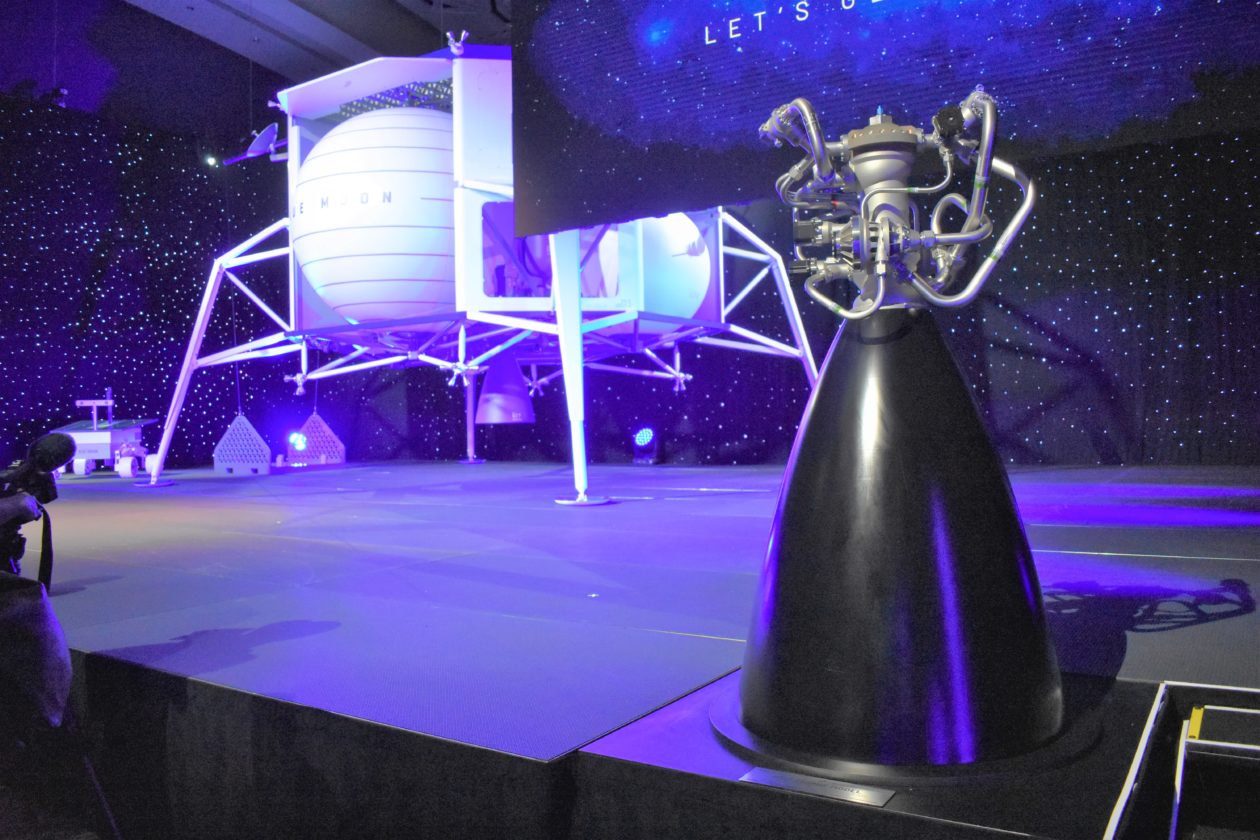 A mockup of the BE-7 rocket engine sits on stage near the Blue Moon lander. The BE-7 is designed for use on Blue Moon. (GeekWire Photo / Alan Boyle) 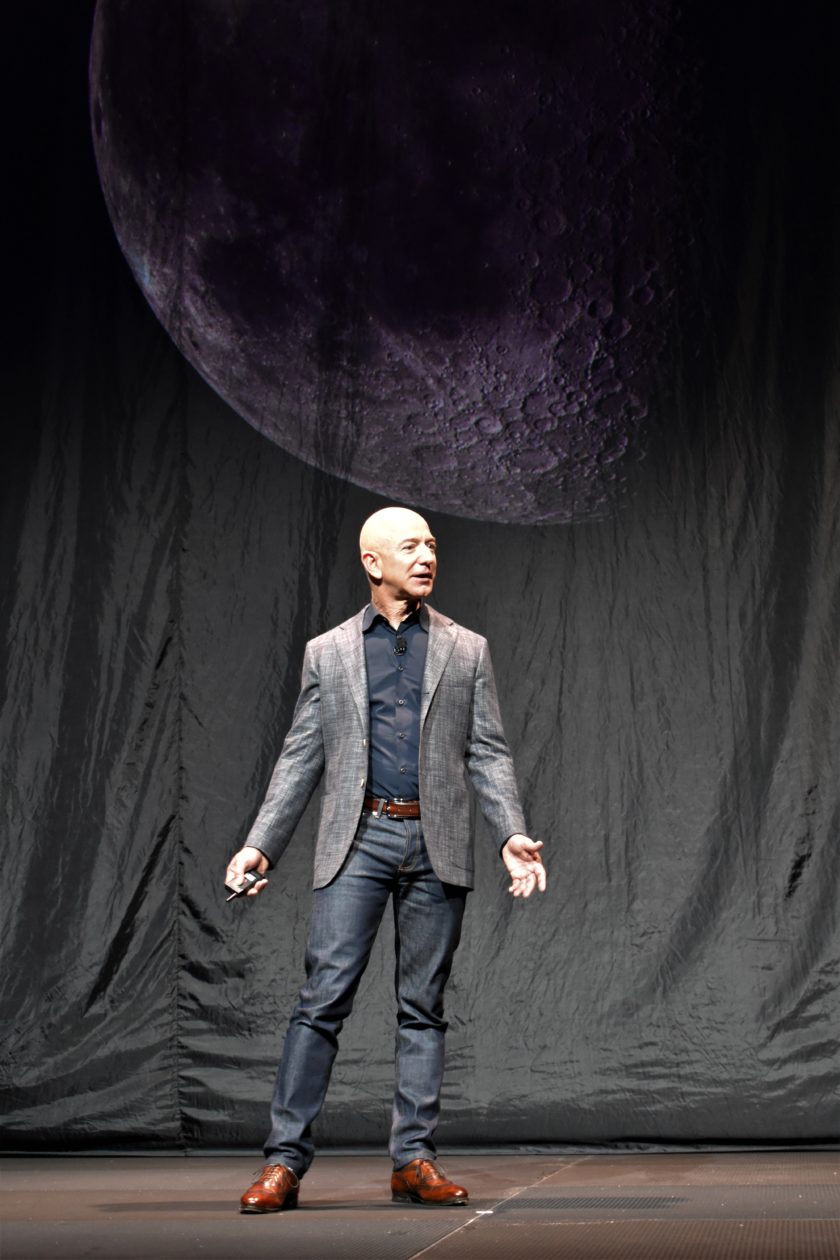 Jeff Bezos, the founder of Blue Origin as well as Amazon, takes the stage beneath a picture of the moon. (GeekWire Photo / Alan Boyle) 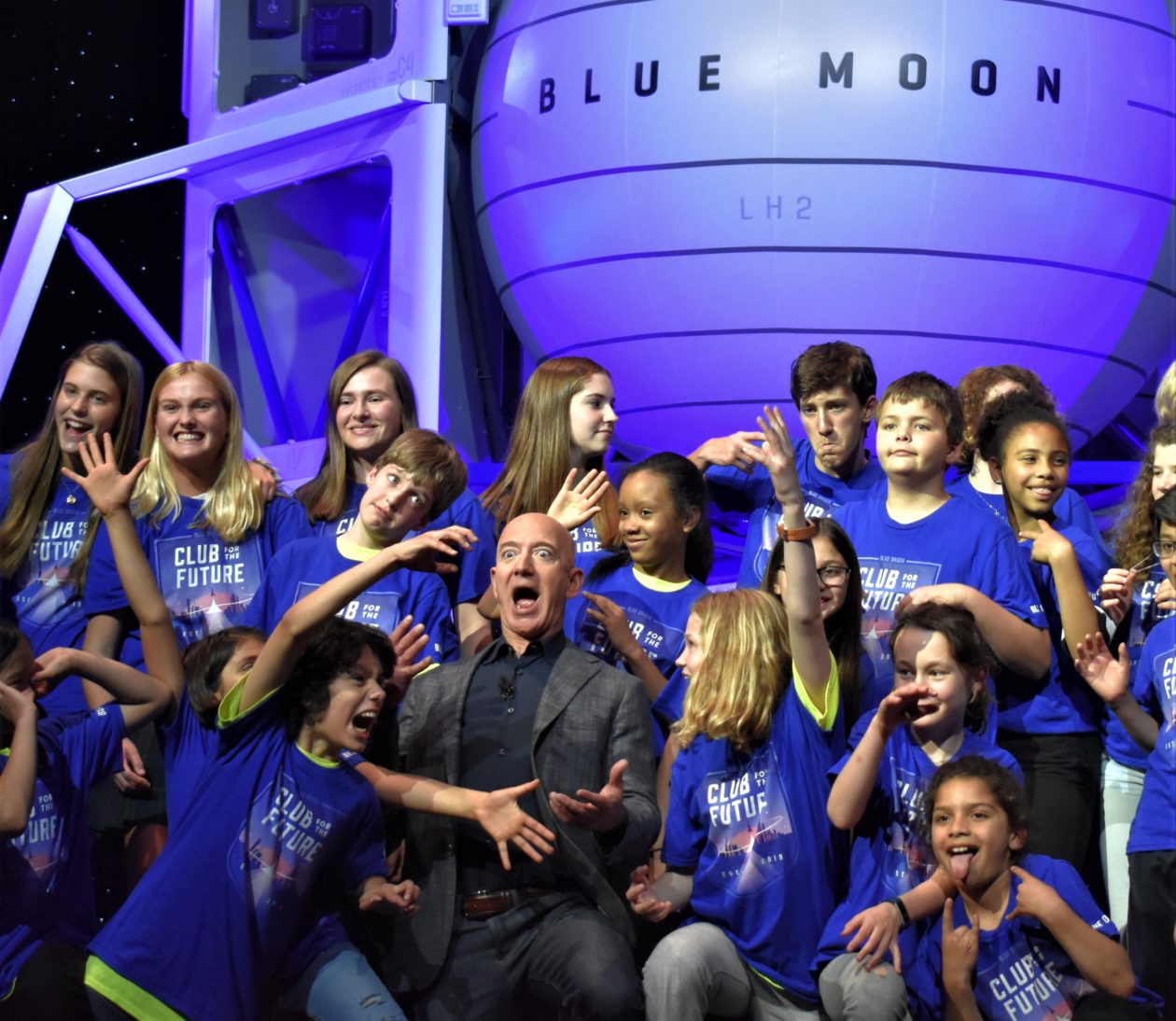 Jeff Bezos asked “Club for Space” kids to strike a silly pose in front of the Blue Moon lunar lander mockup – and he joined right in. (GeekWire Photo / Alan Boyle) 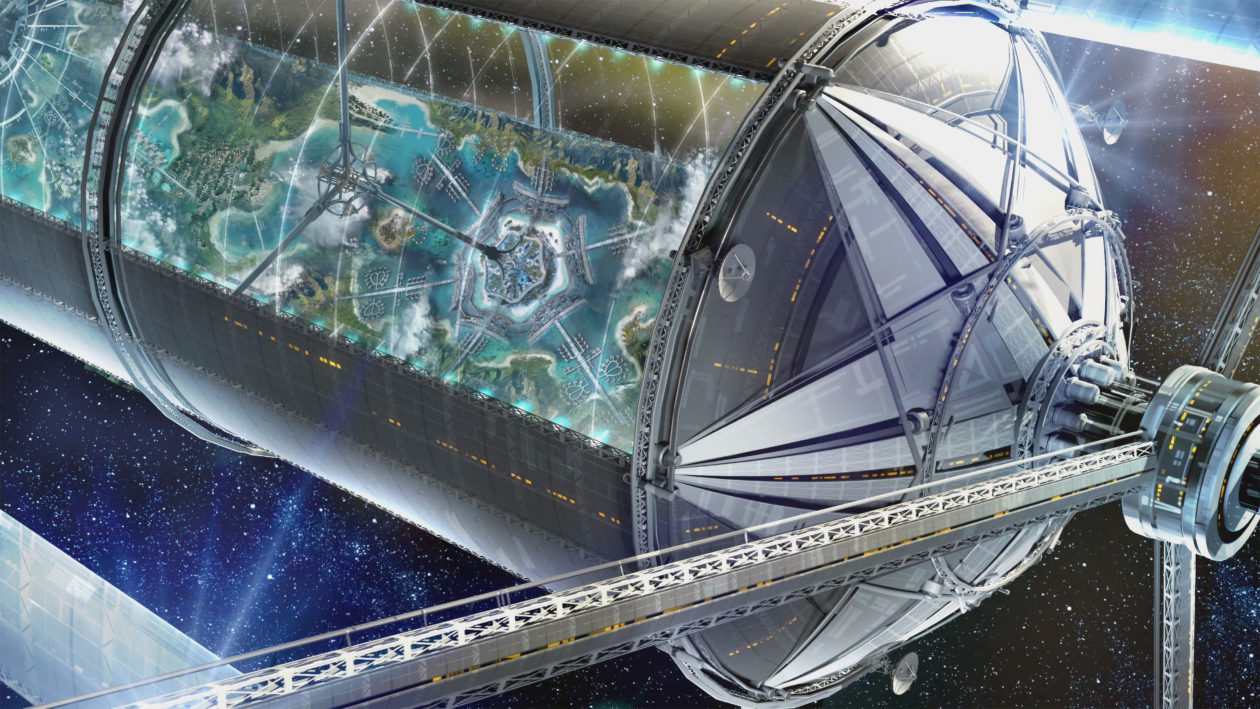 Speculative illustrations show what life might be like in rotating O’Neill cylinders that are placed in space. (Blue Origin Illustration) 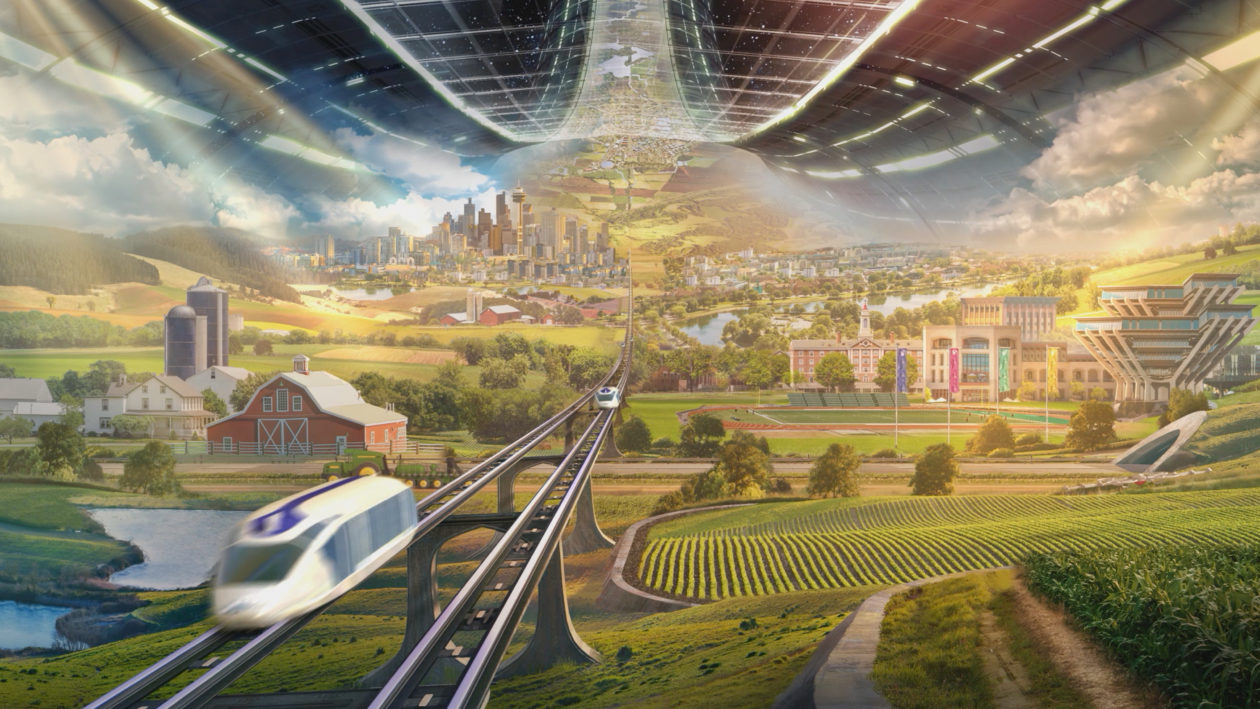 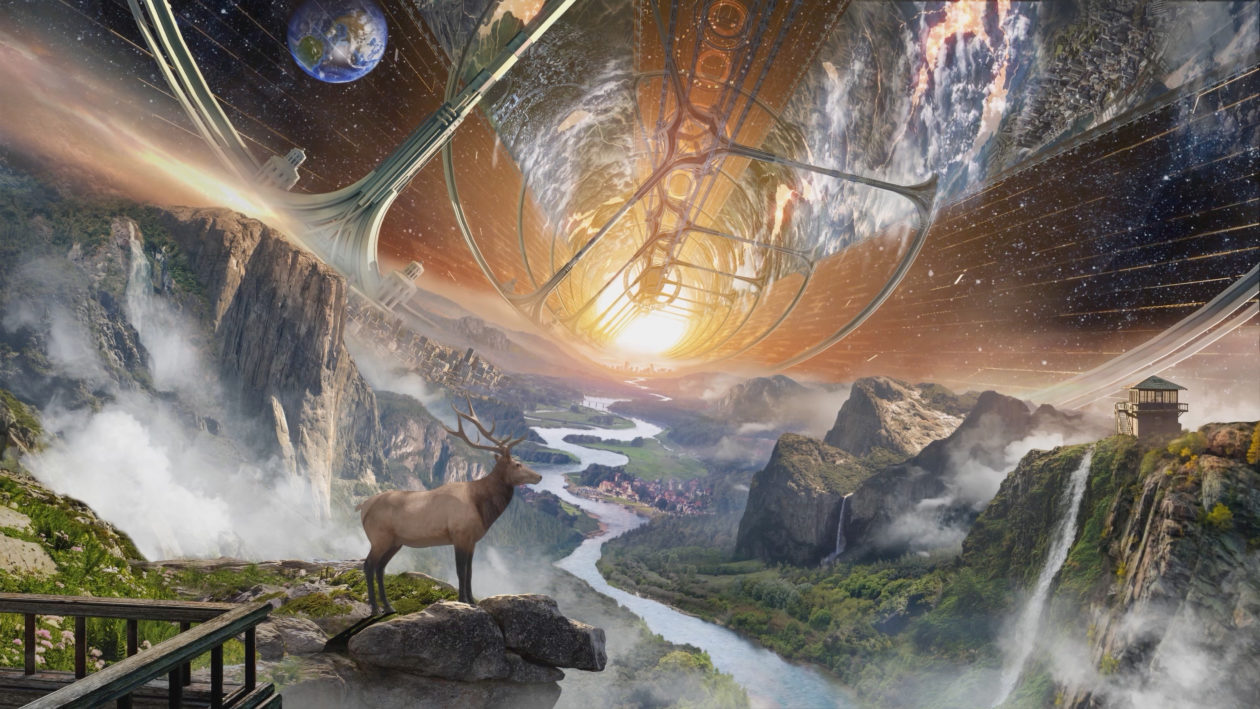 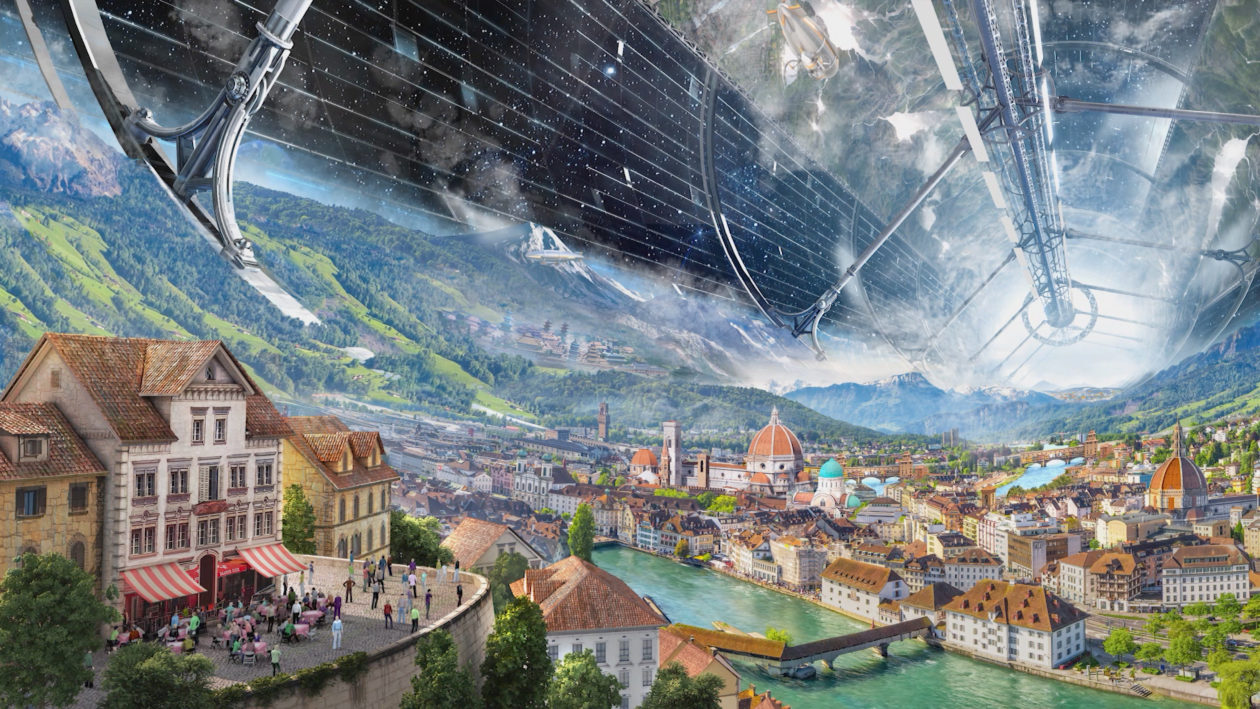 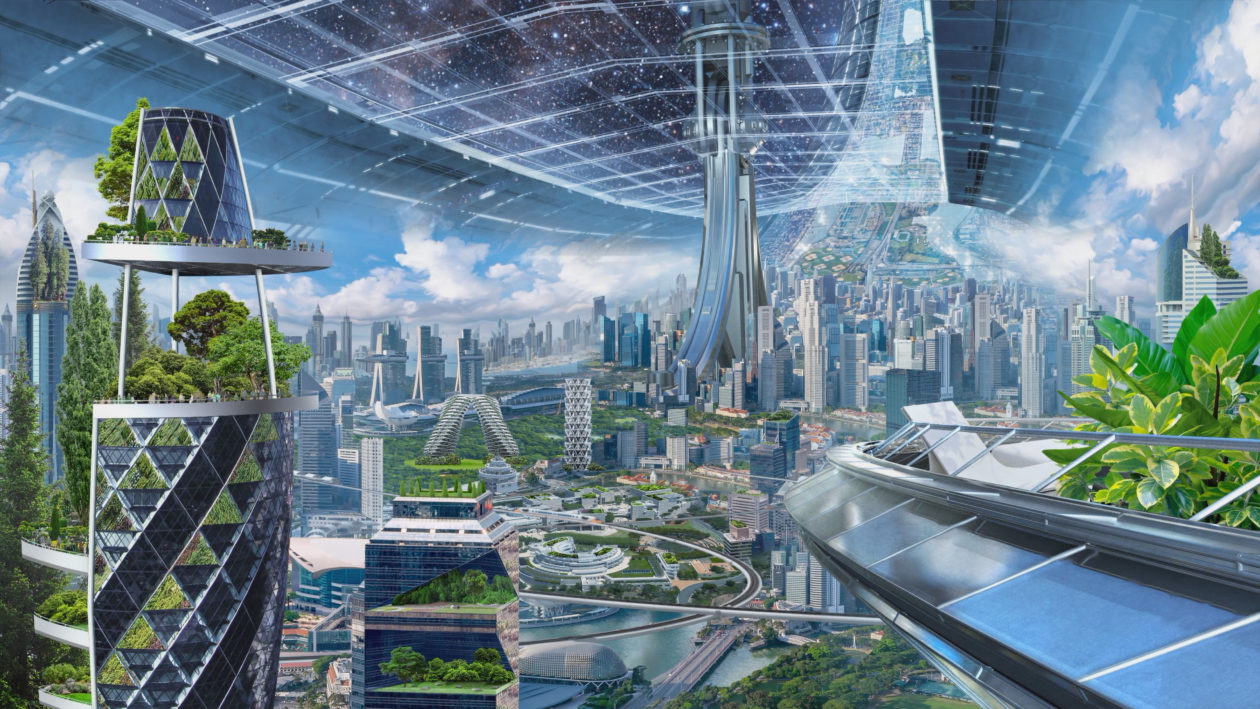 Other companies such as Lockheed Martin and SpaceX have proposed different lunar lander concepts, and it’s far too early to say which concept will win out. But based on Bezos’ comments today, Blue Origin seems likely to proceed with Blue Moon in any case.

“I can’t wait until they move forward with this,” Stallmer told GeekWire.

Bezos shied away from referring to a specific mission, but he said the moon’s polar regions would be promising places for off-Earth settlement because the permanently shadowed craters in those areas are thought to contain substantial reserves of water ice. That ice could be processed to provide drinking water, oxygen for breathable air and hydrogen for rocket fuel.

He said Earth will always be “the best planet” for our species, but repeated his oft-stated view that over the decades ahead, increasing demand for energy and resources will require humanity’s expansion out into the solar system.

“The good news is that if we move out into the solar system, for all practical purposes, we have unlimited resources,” he said.

His long-range vision calls for establishing outposts on the moon and Mars, and in city-sized spaceships that rotate to produce artificial gravity. Such habitats are known as O’Neill cylinders — in honor of Princeton physicist and space settlement advocate Gerry O’Neill, one of Bezos’ college mentors.

To realize that vision, launch costs will have to be reduced through rocket reusability, and technologies will have to be developed for use of in-space resources, Bezos said. “Lifting all of our resources off Earth just isn’t going to work,” he said.

Working on the space access challenge has been the main focus of Blue Origin since its founding in 2000, but the company’s efforts are just now getting traction.

For the past four years, Blue Origin has been flight-testing a suborbital spaceship called New Shepard (named after Alan Shepard, the first astronaut to fly in NASA’s Project Mercury). The hardware for New Shepard is built at the company’s headquarters in Kent, Wash., and shipped to a launch facility in West Texas for flight tests. Bezos plans to start putting people on board by the end of this year.

Blue Origin is also developing an orbital-class rocket known as New Glenn (named after John Glenn, the first American to go into orbit). New Glenn would be powered by another new type of rocket engine, the BE-4, which uses liquefied natural gas as fuel. The BE-4 is expected to finish up qualification tests in Texas by the end of this year, with New Glenn’s first launch scheduled in 2021.

Bezos has said he’s spending a billion dollars a year on Blue Origin, with most of that money going toward the New Glenn project. BE-4 engines are currently built in Kent, but they’ll eventually be produced at a multimillion-dollar factory being built in Huntsville, Ala. New Glenn rockets will be assembled at an even bigger factory in Florida, and launched from a complex nearby at Cape Canaveral Air Force Station.

All this activity stems from Bezos’ childhood dream of spaceflight, sparked 50 years ago when he watched the Apollo 11 moon landing at the age of 5. Some of the friends from his youth have joked that the reason he created Amazon was to earn the money to fund his own space effort — and just as jokingly, Bezos has said he “can neither confirm nor deny” that claim.

Bezos often says his dream is to have “millions of people living and working in space,” even though it may take centuries to get to that point.

To get the next generation started off on the right foot, Blue Origin is creating an educational group known as the Club for the Future. The group’s first activity is “Postcards From Space,” which gives kids the opportunity to write down or draw their own vision for having millions of people living and working in space on the back of a stamped, self-addressed postcard.

The first 10,000 postcards received at Blue Origin’s Kent headquarters before July 20, the 50th anniversary of the Apollo 11 landing, will be packed aboard a New Shepard spaceship for a suborbital flight to space and back. Then they’ll be mailed back to the addressee.

“I can’t wait to fly your postcards,” Bezos told the kids.

For more information on the Club for the Future and the “Postcards From Space” project, check out the club’s website.