BELLEVUE, Wash. – Just a stone’s throw away from Interstate 90’s crush of traffic, a decade-old startup founded by Bill Gates is running tests aimed at building the next generation of nuclear reactors.

You’ll find no more than a smidgen of radioactive material at the privately funded venture, known as TerraPower. But if Microsoft’s co-founder and TerraPower’s other leaders have their way, the technologies being pioneered at the 10,000-square-foot lab could boost electrical grids around the world.

We got a rare look inside the lab, which is housed alongside facilities for Intellectual Ventures in Bellevue’s Eastgate neighborhood, and we heard from TerraPower’s executives about the connection between Gates’ past as a co-founder of Microsoft and his vision for future energy innovation.

“If you think about Bill Gates’ accomplishments in computing, we’re really trying to repeat that for nuclear energy,” said Chris Levesque, TerraPower’s president and CEO. “We think nuclear is overdue for technology demonstrations.”

That may sound strange in an age when so much attention has been focused on solar and wind power, but Levesque argues that nuclear power has a big role to play in the transition from fossil fuels to carbon-free sources of energy.

“We see a world that has continued penetration of renewables, and we think that’s a very good thing for the climate,” he said. “But we do think there’s a limit to renewables penetration … where you’re going to need some baseload generation. If it’s going to be carbon-free, I think it has to be nuclear.”

About 20% of America’s electrical power comes from nuclear plants, compared with 17% from renewables and 63% from fossil fuels. The United States currently leads the world in terms of total kilowatt-hours produced, but other countries such as France and Japan get a higher percentage of their power from nuclear.

Nuclear has gotten a bad name over the years – primarily due to safety breakdowns ranging from Three Mile Island to Chernobyl to Fukushima, plus long-running concerns about long-term nuclear waste storage . Economic factors aren’t helping: Thanks in part to fracking, it’s cheaper to build and operate gas-fired power plants than nuclear reactors.

To turn the tide, TerraPower’s 150 employees are working on technologies that address nuclear safety as well as waste disposal and cost of operation.

Liquid sodium serves as the coolant, transferring heat out of the reactor to turn a steam turbine. TWR’s proponents say the reactors are safer than traditional water-cooled reactors because they operate at lower pressures and aren’t vulnerable to a fuel-scattering explosion like the one that hit Chernobyl.

The TWR concept has been around for decades. Some experts say it’s “extraordinarily challenging” to work with liquid sodium, due to the potential for leaks and the material’s high level of chemical reactivity. But TerraPower’s engineers say their materials technology is up to supporting the “once through” operation that would be used in the reactors they’re developing.

“The new thing is advanced physics, enabled by modern computing power that was really only available in the last 10 to 15 years,” he said.

⚛⚡Researchers are giving molten salt reactors a refresh! Learn how this classic technology works and why it could play a role in America's energy future.

TerraPower’s Bellevue lab focuses on putting the company’s computer models through real-world tests, complete with full-size rods and a two-story-high fuel assembly test stand, but without using actual reacting fuel. The test rods are made of stainless steel, and the test stand uses electricity to measure operational stresses on the hardware.

Lab facility manager Brian Morris said the radiation exposure is barely above background levels. “You could fly from here to Washington, D.C., and you’d get more radiation than standing in that lab for a week,” he told us after the tour.

Another technology, known as the molten chloride fast reactor or MCFR, isn’t as far advanced but promises improved efficiency and economy, Levesque said. MCFR reactors would use molten salt both as coolant and as the fuel medium.

TerraPower and Atlanta-based Southern Company are working with a consortium of partners, including the Oak Ridge and Idaho national labs, on an MCFR development project backed by a $40 million cost-share award from the Department of Energy.

For now, the TWR and MCFR projects share space at the Bellevue lab, but going forward, much of the work on the MCFR project will be done at a new 65,000-square-foot facility that’s being outfitted in Everett, Wash.

Just last week, TerraPower announced that it’s conducted 1,000 hours of continuous operations on an isothermal loop that’s designed to test how molten salt would affect components as it moves through a reactor. The successful loop experiment represents the first step toward setting up a full-scale integrated effects test platform that will support the licensing process for a demonstration reactor.

At the Everett test facility, engineers will use megawatts’ worth of electrical power to simulate the heat that would be produced by the nuclear reaction. TerraPower says the simulations will simplify and accelerate the testing of key components in a reactor’s high-temperature environment. 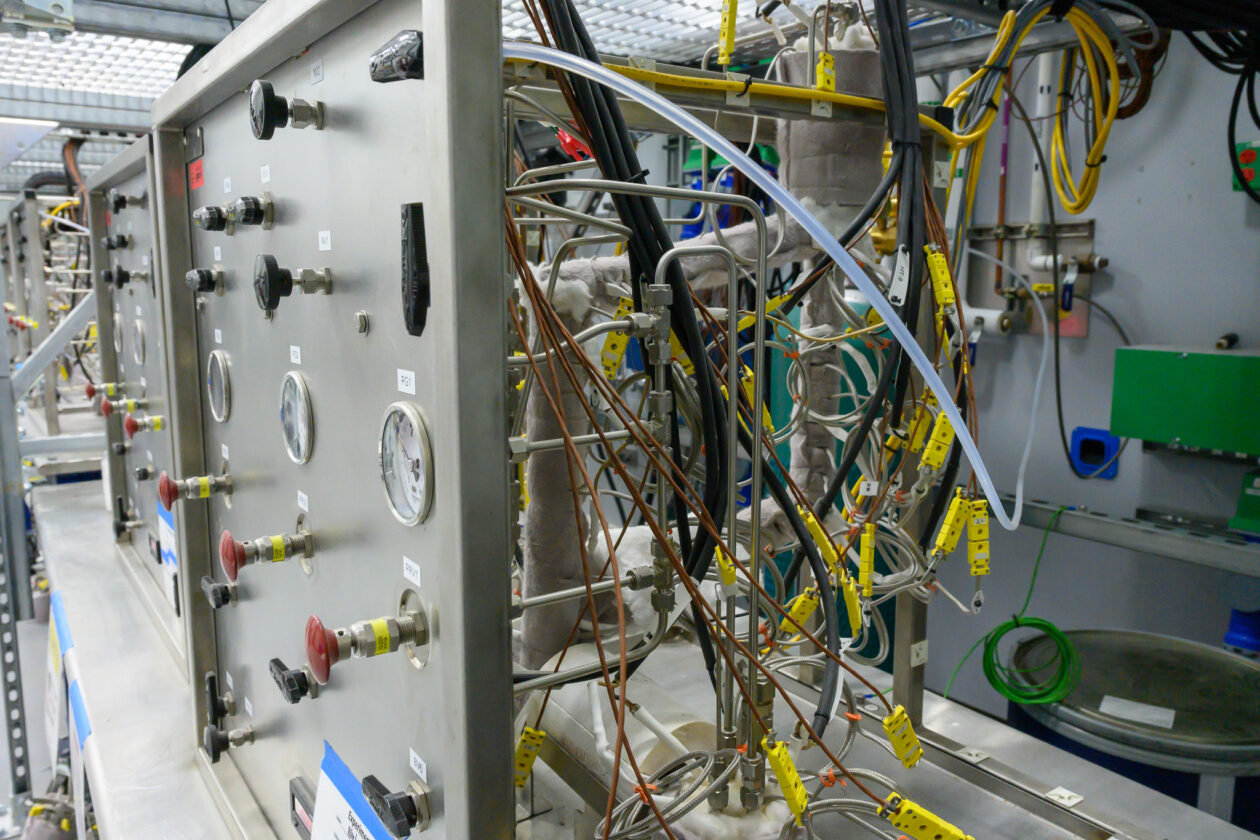 Instrument-laden loops at TerraPower’s lab are used to test how molten salt would flow through a nuclear reactor. (GeekWire Photo / Kevin Lisota) 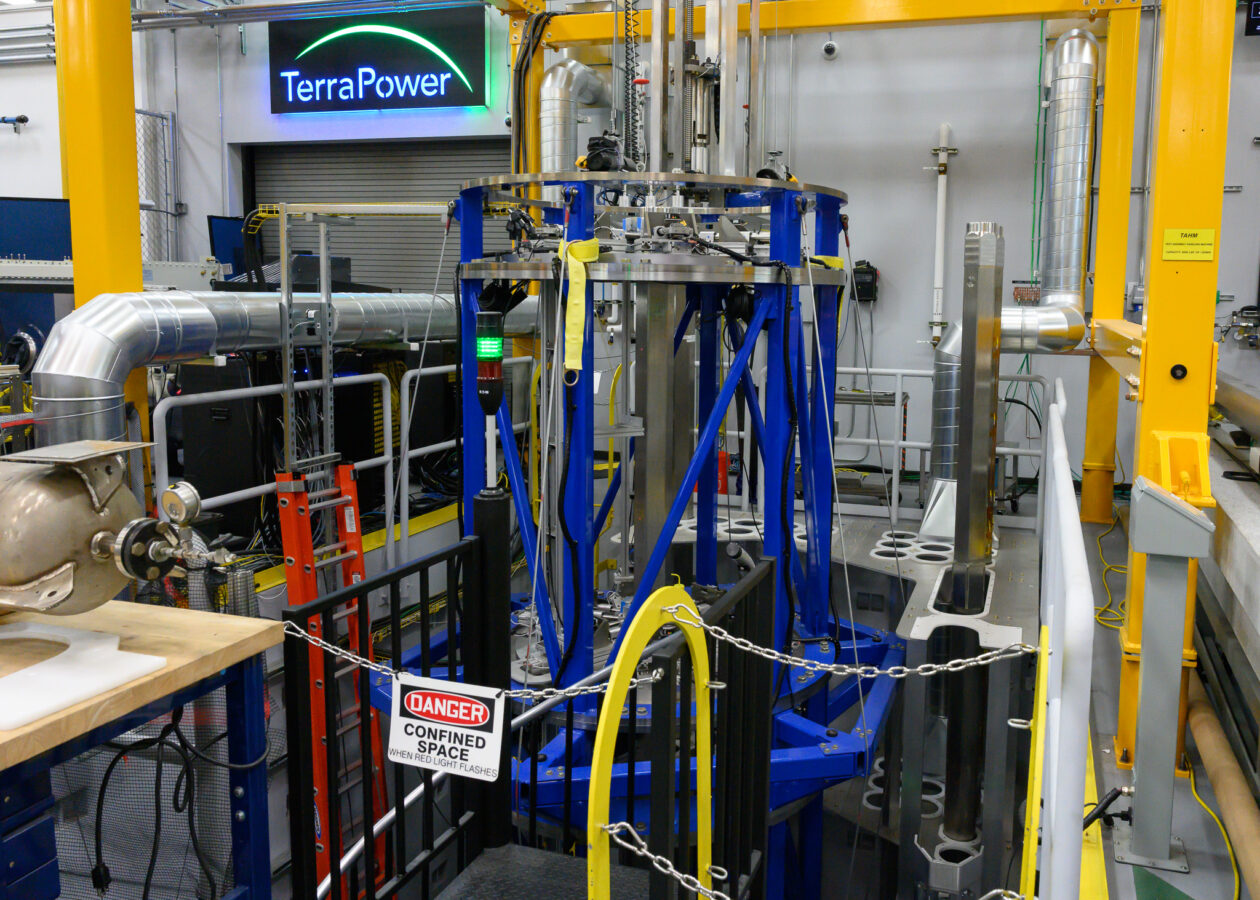 TerraPower’s fuel assembly test stand is designed to check how fuel rods and other components would stand up to stresses inside a nuclear reactor. (GeekWire Photo / Kevin Lisota) 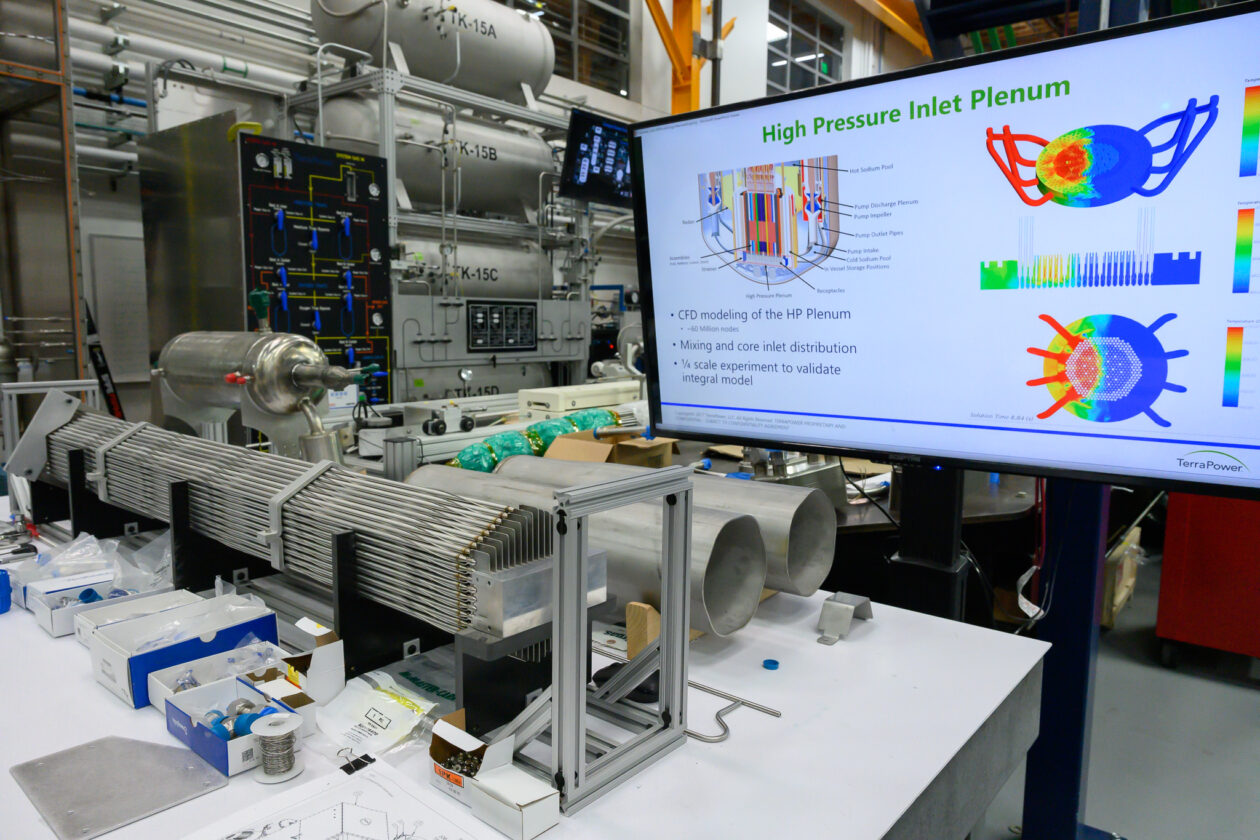 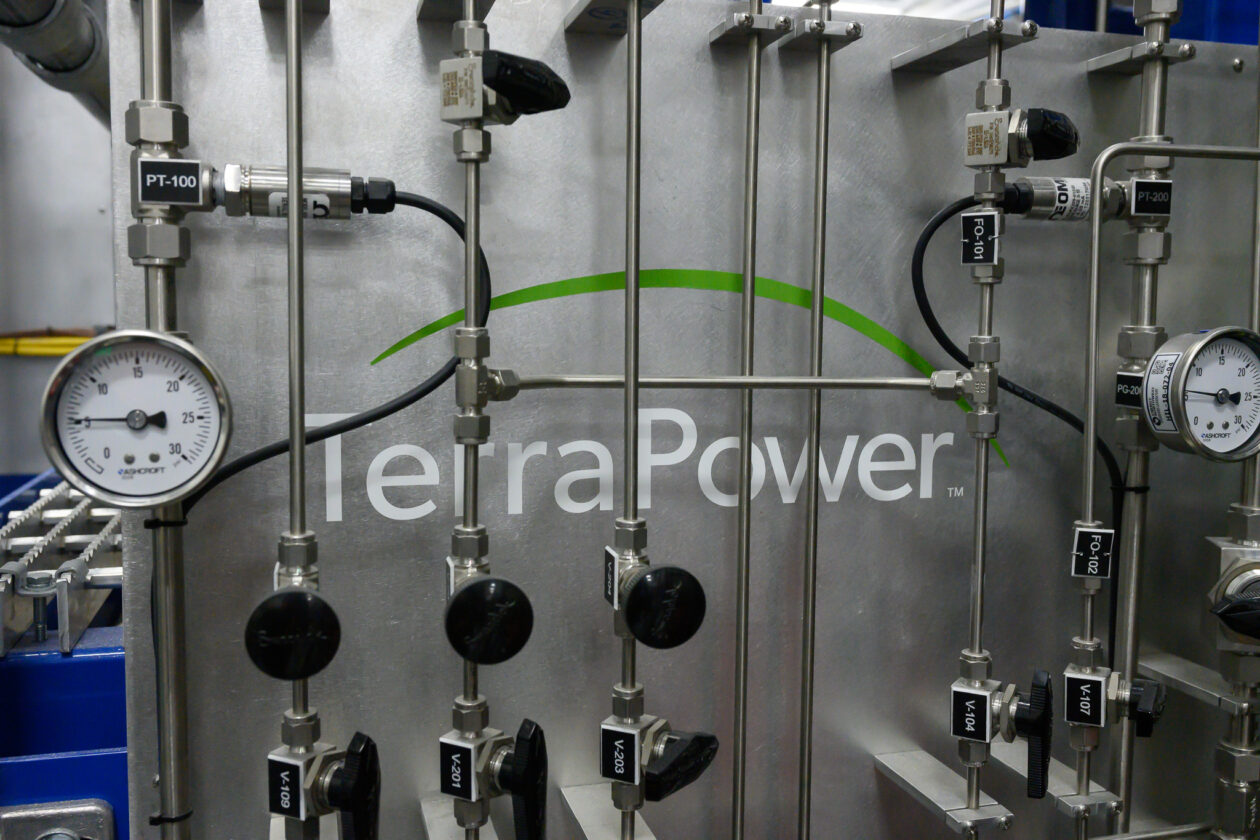 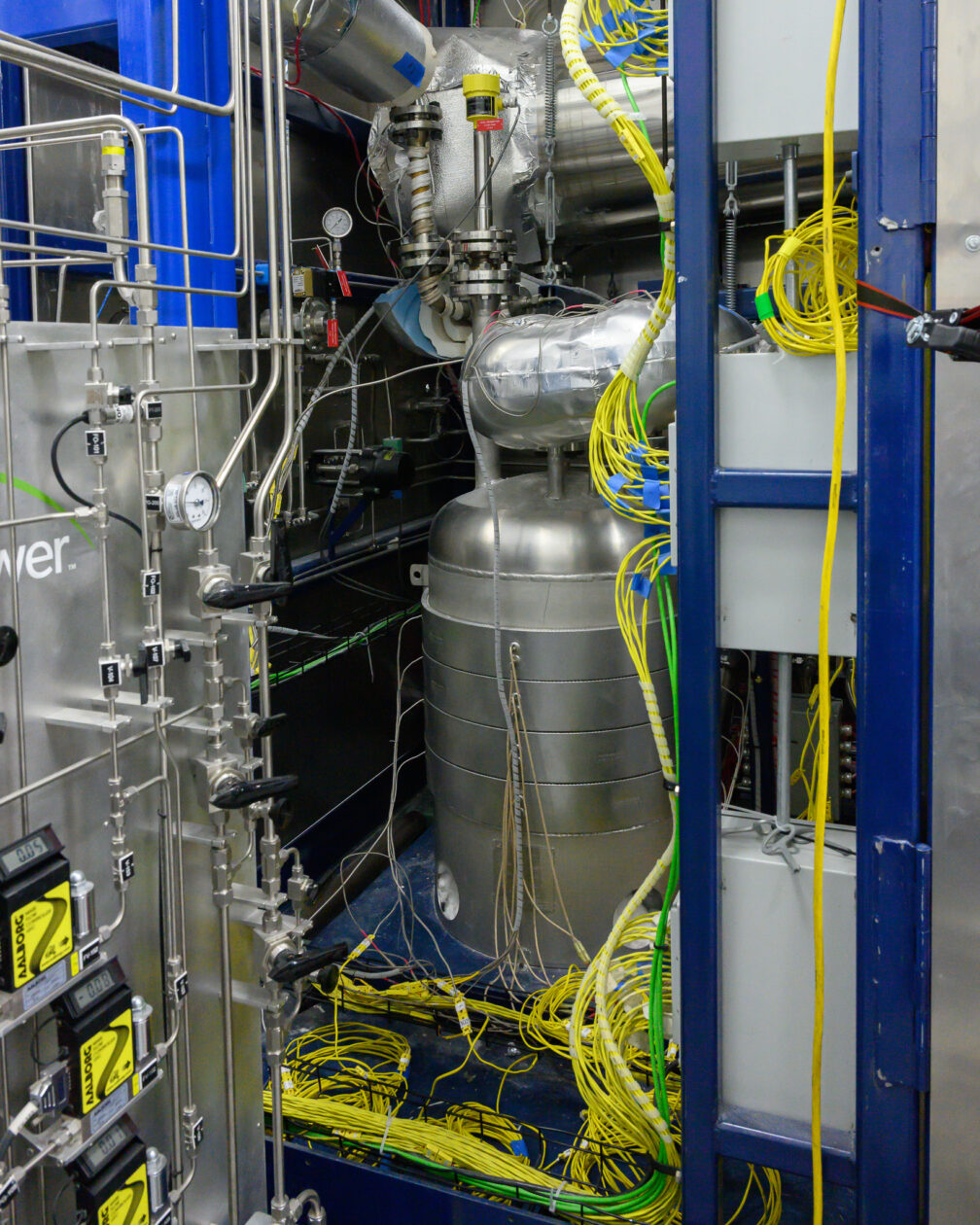 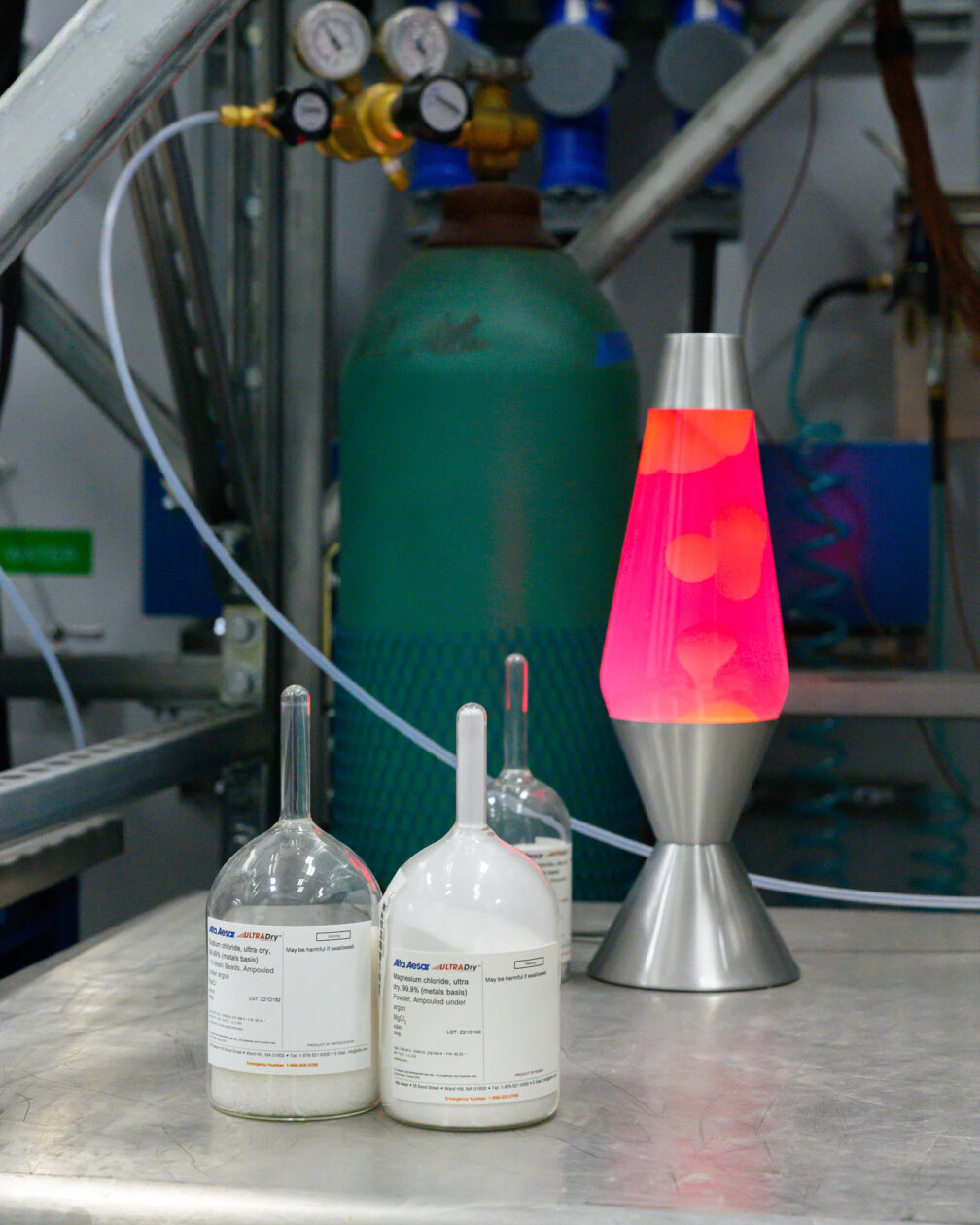 A Lava Lamp is part of the decor at TerraPower’s Bellevue lab. (GeekWire Photo / Kevin Lisota) 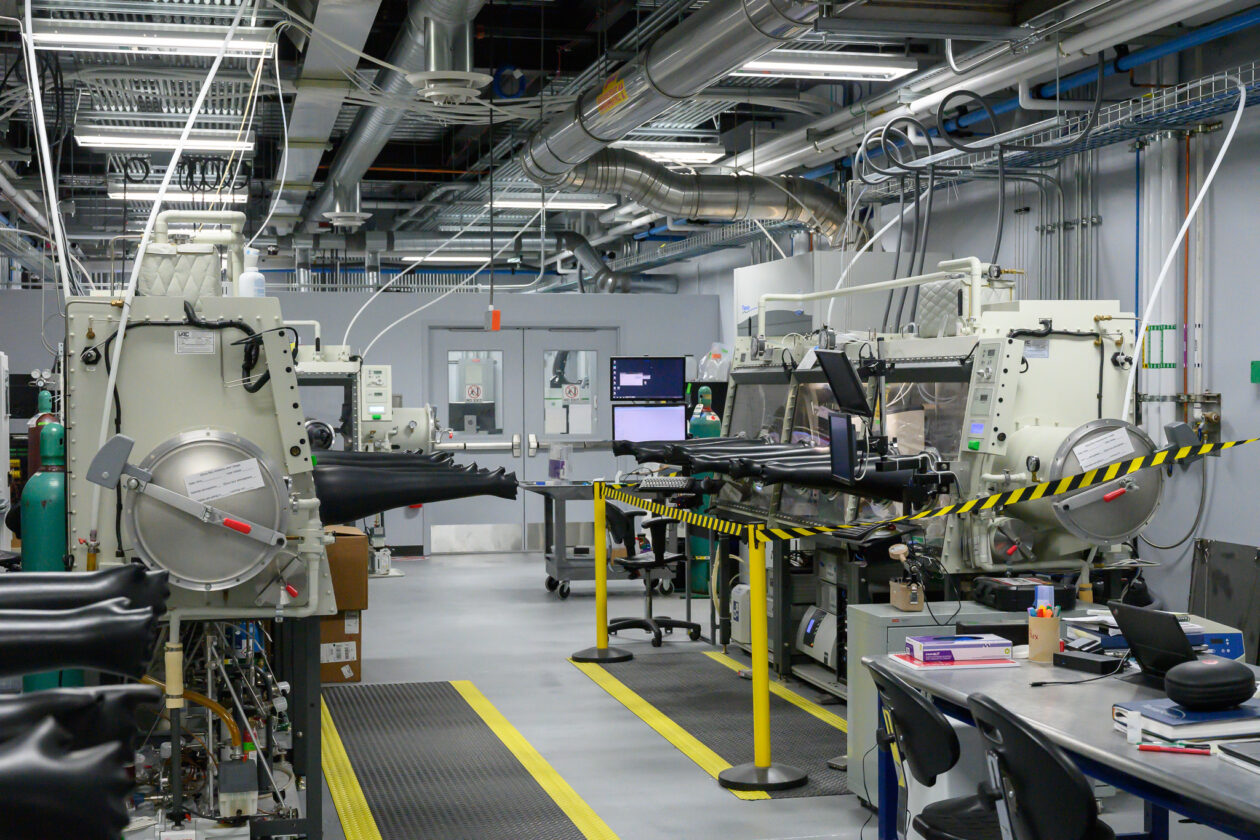 Tested in the U.S., then sold abroad?

It will cost billions of dollars to build just one next-generation nuclear reactor.– and the financial and regulatory challenges are at least as daunting as the technical challenges. Finding a way to cover the cost has been a bright blip on Bill Gates’ radar screen for the past year.

“Even Bill is not going to fund a multibillion-dollar reactor on his own,” said Marcia Burkey, TerraPower’s senior vice president and chief financial officer.

In a series of statements, and in meetings with members of Congress, Gates has talked up the idea of using public-private partnerships to fund advanced nuclear reactor demonstration projects in the United States.

Until last year, TerraPower was invested in a different sort of public-private partnership … in China. The company and its Chinese partners, led by the state-owned China National Nuclear Corp., were due to break ground on a demonstration reactor that would have gone into operation in the mid-2020s.

The Trump administration’s trade battle with China pushed that plan off the tracks, however. As a result, TerraPower has turned its focus to the Nuclear Energy Leadership Act, or NELA, a congressional measure that would provide federal funding for next-generation nuclear plants.

“In China, we were partnered with CNNC, and they were bringing investment, and they were also supplementing our team with their large engineering workforce,” Levesque said. “So we’re really in the process of recreating that now in the U.S. We’re having some advanced discussions with several partners. I can’t reveal the names of those, but because TerraPower has good technology and we have a great business case, we are putting together several partnerships for our NELA application.”

The bipartisan legislation, which hasn’t yet been approved by either the House or the Senate, calls on the Department of Energy to set up two advanced nuclear power demonstration projects by 2025, and up to five more by 2035. It also lays out a plan for forging federal power purchase agreements.

Levesque estimates the total cost of building a demonstration reactor at $3 billion, more or less, depending on the technology used.

TerraPower isn’t the only company likely to seek NELA support: General Atomics, Transatomic Power, Gen4 Energy and Oregon’s own NuScale Power are also on the list of ventures with next-generation nuclear reactor concepts. NuScale is already laying plans for a demonstration reactor at Idaho National Laboratory. That’s a model that TerraPower could follow for its TWR and MCFR concepts.

“We’d like to make them American technologies that we partner with American companies on,” Levesque said. “We’d involve the U.S. national labs in the program. We might even see one of these demos built on a national lab site.”

Levesque said the fact that TerraPower’s reactor designs were born in the Pacific Northwest could fuel some “supply chain development in this area.” But will advanced reactor designs fuel a large-scale nuclear renaissance in the U.S.? That’s debatable, largely due to the nation’s current bounty of cheap natural gas.

“The U.S. and Canada are very tough markets,” Levesque acknowledged. “If nuclear isn’t going to be credited at all economically for being carbon-free, then it’s very difficult to compete with today’s natural gas prices. That’s one of the reasons we’re working so hard on advancing MCFR. We think MCFR could have the potential to compete with natural gas.”

He said the cost equation looks a lot better outside the United States. “In many other countries, electricity prices are higher,” Levesque said. “Natural gas is more difficult. We think that TWR could be very competitive there, and it’s available today.”

We’re being outnumbered by Russia and China by something like 30 or 40 projects to one.

Gates pointed to the issue of global “energy poverty” last week in a posting to his Gates Notes blog. “For the nearly 1 billion people around the world who don’t have access to electricity — or whose access is so unreliable that they can never count on having power — an outage can go on for days or even weeks,” he wrote. “And these outages are more than just an inconvenience. They can be deadly.”

“We’re being outnumbered by Russia and China by something like 30 or 40 projects to one,” he said. “We’re the country that created civil nuclear technology, but we’re beginning to get shut out of the game. … It’s hugely important for the U.S. to have the technology for carbon avoidance — but it also has serious security implications for the U.S., because if we don’t deploy this next phase of nuclear, we’ll be continuing this trend of losing our edge in nuclear energy.”

That may sound like an abrupt pivot, considering that just a year ago, TerraPower was getting ready to build its first plant in China. But Levesque said TerraPower’s current focus is in tune with the goal of making American nuclear power great again.

Levesque noted that TerraPower has helped train “a new wave of nuclear engineers” over the past decade.

“We have all these young people who are raring to go,” he said. “We have countries like China and Russia copying our old stuff, and doing it quite well. …We’re the people with the new stuff, and it’s time to go demonstrate the next technology. That’s our traditional American role. We’ve done it in computing. Now it’s time to do that in nuclear energy.”