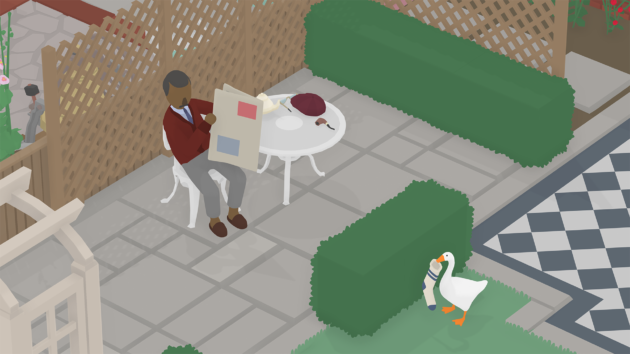 In a month that was riddled with big video game releases, the most unexpected success story of September turned out to be the indie game about being a very rude goose.

Untitled Goose Game, as of this writing, is the No. 1 digital game on the Nintendo eShop, beating out big-ticket titles including Nintendo’s Link’s Awakening remake, the rerelease of the classic Jedi Outcast, and the long-awaited Definitive Edition of the popular JRPG Dragon Quest XI. (It’s also available on the PC/Mac, as an Epic Games Store exclusive)

It’s been an unusually killer summer for games, especially on the Switch, and September saw several other high-profile, hotly anticipated cross-platform releases, such as Borderlands 3, Monster Hunter World: Iceborne, and NBA 2K20.

Untitled Goose Game’s popularity would be remarkable even if it had come out in a quieter launch window, but against this kind of competition, the game’s success is borderline miraculous.

It’s officially gone viral, with a lot of celebrity shout-outs and social media buzz, and as with every lead from every popular game on the Switch, somebody wants to see the Goose in Smash Brothers.

In Untitled Goose Game — developed in Melbourne, Australia, by the four-person studio House House, and published by Panic, based in Portland, Ore. — you’re a goose who’s out to torment the inhabitants of a quaint rural village. You have an entire button dedicated to angrily honking at things and people, and a to-do list that’s entirely dedicated to causing mayhem. It’s simple, clean, easy to understand, and 100 percent about being the biggest bird jerk possible to a bunch of villagers who, as far as I can tell, didn’t do anything to deserve it. You’re just an evil goose, because geese are evil.

To pigeonhole the game’s genre, and to make a completely unnecessary bird pun, Untitled Goose Game is a sort of stealthy adventure set in an open world. You enter each part of the village with a list of goals, and when you accomplish them all, you move on to a new area. Once your reign of terror is over for the day, so is the game. It’s a three-hour, $20 burst of sheer madness.

? What a wild week. Thank you all so much for playing and appreciating our goose, seriously. Not played it yet? It's 25% off until the end of this week… https://t.co/cnBoNZ0IG1 pic.twitter.com/o7opy0dee1

It is easy to see how the game’s caught on, though. It might be one of the most casual-friendly releases I’ve seen this year, even on the Switch. There are no time limits, failure states, or skill requirements to speak of; you launch directly into your new career as a goose tyrant within moments of starting the game, and are told everything you need to know right away.

The more puzzle-oriented tasks on your to-do list are mostly solved through common sense and a bit of sneaking around — obviously people will take their things back from you if they see you with them, so you need to distract them in order to steal their stuff — and the solutions are open-ended enough that whatever you think of doing will probably work.

Untitled Goose Game is also notably non-violent. No matter what you do to the villagers, you can’t really hurt them and none of them are going to fetch a rifle to deal with you. You are simply allowed to be a mean bird for as long as you like without consequences, in a small open world with a light, jazzy soundtrack that you can explore at your leisure. 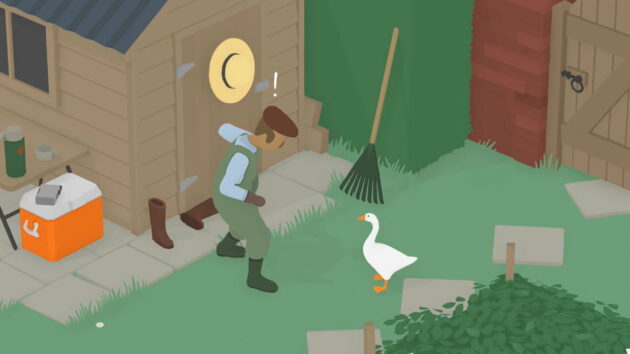 Untitled Goose Game is the second title for both House House and Panic, following House House’s Push Me Pull You and Panic’s co-publishing of Campo Santo’s Firewatch. The game ended up launching under its placeholder title, as according to the developers, they didn’t come up with anything they liked better before their announcement deadlines.