The Seattle Fire Department responded to reports of a possible explosion and smoke at Google’s offices in Seattle’s Fremont neighborhood Thursday morning. Firefighters arrived to find a power outage and investigated an electrical vault, with help from Seattle City Light workers.

“There’s a blown breaker or something at a huge level. We’re checking it out,” SFD Battalion Chief Joel Andrus said at the scene.

At least 100 people, including Google employees, were evacuated from multiple buildings as responders investigated. There was no fire or smoke visible and employees lingered on nearby sidewalks or walked away into the adjacent neighborhood. 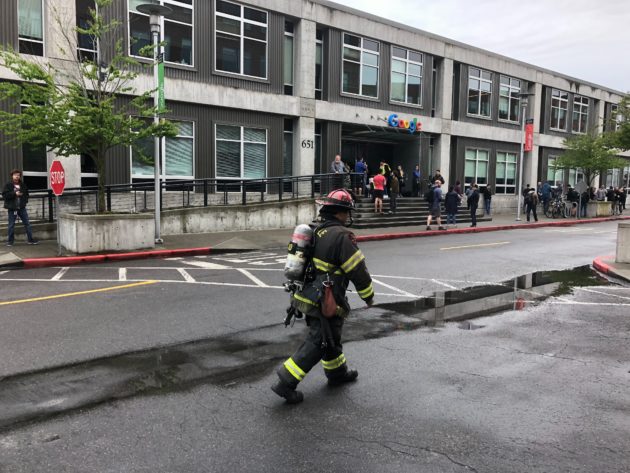 One Google employee told GeekWire that two buildings were “closed for the day” and that he planned to go work from home.

The emergency response began at 9:06 a.m. and several fire trucks and utility vehicles were gone from the scene by 10:20 a.m.

A City Light crew chief said that responders assessed the situation after some smoke cleared from a Google electrical room and determined that it was not an issue with City Light’s vault. A main breaker on Google’s equipment had reportedly tripped over and a private contractor for the company was dealing with the situation.

We’ve reached out to Google for more details and will update this post when we hear back. 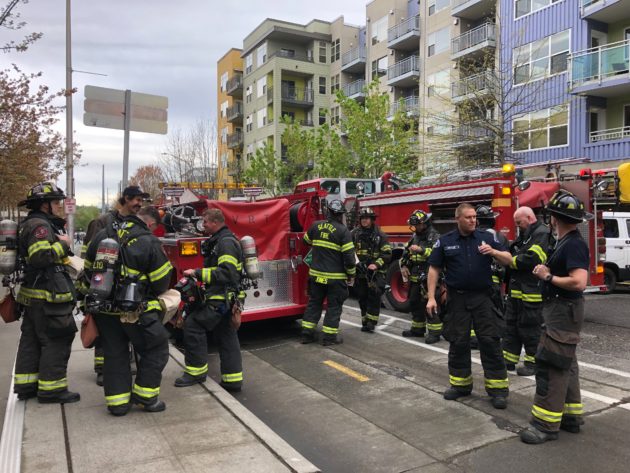 Google first landed in Fremont in 2006 shortly after opening its Kirkland, Wash. engineering outpost. The tech giant has been steadily expanding its footprint since then and is now building a large new campus in the South Lake Union neighborhood near Amazon. It plans to move into that space this summer, but even after it expands south a few miles, Google will hold on to the several buildings it amassed in Fremont over the years.

With thousands of additional employees in Kirkland, Google now employs up to 3,000 people in the Seattle area, one of its largest remote outposts outside of its Silicon Valley headquarters.

Other out-of-town companies have followed Google’s lead, opening up their own engineering centers in the Seattle region to tap into the technical talent.

Update, Wednesday, 1:15 p.m. PT: Google said Wednesday afternoon that all Googlers were safely evacuated during the incident and that the cause of the outage was still being determined, but that there were no signs of foul play. The company was in process of trying to restore power to the affected building and it would remain closed until power is restored. All other buildings were reopened and fully functioning and employees were working from other buildings during the outage.