That’s one of GeekWire’s founding principles as a technology news website — that the innovation-related work in the Seattle region impacts the world — and it certainly rang true at the GeekWire Summit this week.

More than 800 business, tech, media, and government leaders joined us for our eighth annual conference, where attendees had a chance to learn about the future from more than 65 world class speakers such as Microsoft President Brad Smith, University of Washington president Ana Mari Cauce, Seattle Seahawks legend Doug Baldwin, Expedia CEO Mark Okerstrom, and many others.

Thanks to everyone for joining us this week at the GeekWire Summit, presented by Bank of America. We hope you walked away connected, informed, and inspired. For those who missed the event, check out a rundown below. Also see some of the top quotes and moments with our Day 1 and Day 2 recaps.

Read all our full Summit coverage here, as well as stories from Seattle Times, Bloomberg, and CNBC journalists. Catch up on all the social chatter on Twitter here. See who our attendees find inspiration from here. Learn more about the awesome illustrations of each on-stage discussion (like the one below, of Microsoft President Brad Smith) here. And check out photos from our OCCO robotic camera.

We’ll also post videos from the on-stage sessions in the coming days, so stay tuned for that. 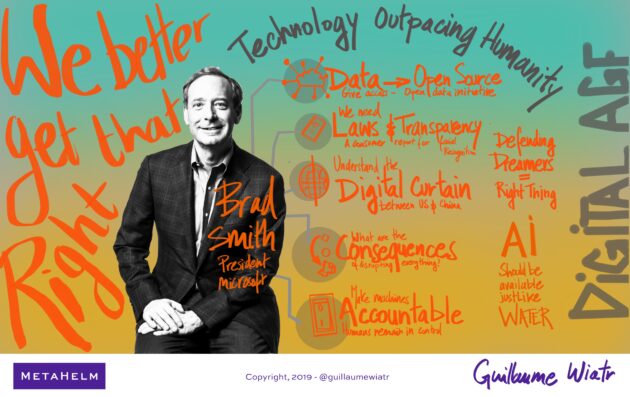 A big thanks to Bank of America, our presenting sponsor of the Summit.

See you at our next event, The Playbook, on November 7.

Games, food, fun and networking as the 2019 GeekWire Summit opens with a party

The Summit kicked off Monday evening in Seattle with a waterfront welcome party to give attendees the chance to mix and mingle ahead of two days of our signature tech conference.

Hundreds of people crowded the headquarters offices of party host and sponsor Flyhomes on Western Avenue. A mac-n-cheese bar, beverages, prizes, assortment of games, and Dick’s burgers were all part of the attraction — as was the view west out of the front of space, thanks to the recent demolition of the Alaskan Way Viaduct just feet away.

“The balance of long-term strategy and product development and how it fits with short-term accountability, you always have to have a long-term plan. … In basketball, every 24 seconds you get a grade. … The level of accountability is higher in sports.” — on what Ballmer has learned in the NBA, following a long career at Microsoft.

In the absence of regulation, tech companies and law enforcement are left policing themselves

The Audio Revolution: Podcasting and the Future of Media

Sponsored Lunch Panel: Game On: The Future of Social Games

“It’s fair to say that artificial intelligence will reshape the global economy over the next three decades probably more than any other single technological force. Probably as much as the combustion engine reshaped the global economy in the 20th Century.” — Microsoft President Brad Smith on the effect of AI

“It’s all of a sudden forcing people to take a real look behind the curtains on everything and not just assume. Going forward there will be a lot more scrutiny on business models and not just product market fit.” — Greycroft founding partner Dana Settle on the backlash from the WeWork saga

“The moment Pegasus was born, he flew into thunder and lightning without any fear. As a leader, that’s my nature and the nature of the company as a whole. We run into fires. And we invite others to run into fires with us.” — Outreach CEO Manny Medina on his alternative phrase for “unicorn”

“What does Netflix say? Their main competitor is sleep. In some ways I would say our competition is apathy and people who don’t want to be curious about the world. I know that’s very lofty but I would say that’s our Netflix-style answer.” — Mark Lavallee on who The New York Times competes against.

“If we can rewind a decade ago and think about the roots of the financial crisis, a key part of that problem was the failure of our regulators. A lot of the smoke signals were there, and there were a lot of excuses and a lot of inaction.” — FTC Commissioner Rohit Chopra

“We try to see diversity as something to leverage, something that we want to lean into. It’s an asset. If we don’t have women or people of color at the table, will we build as empathetic a product?” Jessie Woolley-Wilson, president and CEO of DreamBox Learning

Power Talk: Charlene Li, author, ‘The Disruption Mindset: Why Some Organizations Transform While Others Fail’

“We don’t want data for data’s sake. We want to use data where we can actually improve the experience on behalf of the customer.” — Dave Limp, Amazon’s devices and services chief.

The future of food is mobile, plant-based, and sustainable, experts say

“There is only enough plant-based meat available for everybody in the United States to eat one meal a year. That’s how little there is out there … our goal is to be a scalable company so that it can effectively provide these foods to people who have limited costs and limited access.” — Rebellyous Foods CEO Christie Lagally

“The first time I approached my son with the avatar, he said, ‘Papa!’ And we started playing,” — Kevin Kajitani, co-director of ANA’s Avatar division

“As an entertainer it’s very easy to make that business your identity. I was the Seahawks wide receiver Doug Baldwin for a long time. Don’t get me wrong, it comes with its perks, but at the same time there’s an emotional, mental, physical, and even more so spiritual consequence that comes from selling yourself to that industry.” — Doug Baldwin, former NFL wide receiver

“One thing perhaps that I bring to this job … is a little bit of perspective on what a crisis really is,” he said. “When I was in the White House, crises involved life or death decisions, deploying troops, whether or not we’d have healthcare for millions of people who didn’t have it, and issues of that magnitude. We deal with issues at Amazon that are incredibly relevant and important but I can help bring a little perspective on their significance.” — Amazon SVP of Global Corporate Affairs Jay Carney

Seventh grade CEO Nir Pechuk won the audience vote for Galina, a device to help visually impaired people pour any substance into a container without over-pouring.

“The promise of technology was that it was going to connect us. But in fact, it looks like it has polarized us. More and more people are looking for authentic experiences, as opposed to things. People are getting out there and traveling more and more than they ever have. I don’t think we’ve seen displacement by virtual reality at this point — I think it’s actually the opposite.” — Okerstrom on whether virtual reality will take away from real world travel.

“Google categorized the world’s information on the internet. What we’re essentially trying to do with Microsoft is to catalog … what the interaction is between our immune system and all the diseases that they bind to. After we start building this map out disease by disease, this is actually a web-scale problem.” — Adaptive CEO Chad Robins.

“We’ve been able to show that not only can we make these, but they passively deliver all of those components to blood stem cells, then we do get genetic editing. And we’ve been able to go on to show that we can correct the sickle cell defect using this approach,” — Jennifer Adair, senior scientist at Fred Hutchinson Cancer Research Center

Panel: Power to the Patient: Telemedicine, Digital Health and the Consumerization of Health Care

Sponsored Lunch Panel: Can You Fax It Over? Fighting Waste, Frustration and Caregiver Burnout in Healthcare Operations

Panel: The Quest for Personalized Medicine

Panel: Open Science: How Machine Learning and the Cloud are Transforming Healthcare