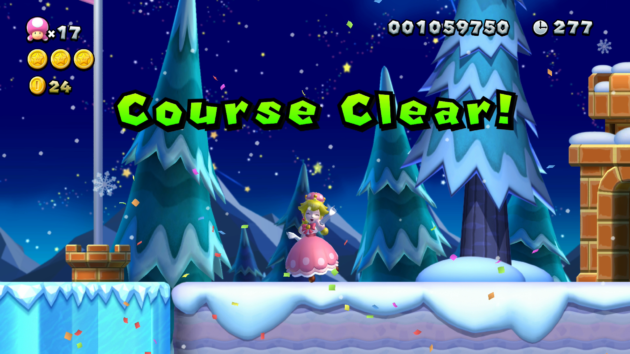 Back in 2013 when it was released, New Super Mario Bros. U got kind of a complex reaction from fans. On the one hand, it’s a classically styled Mario game that you can play with up to three of your friends locally and simultaneously, cooperating to hop and bop your way across the Mushroom Kingdom. It’s exactly the kind of couch co-op for which the Wii-U, and subsequently the Nintendo Switch, seemed to be designed.

On the other, it’s also a good way to start a fight. In NSMBU, players can scoop up extra lives and power-ups before anyone else can get to them, bounce off each other, punt one another into pits, or on certain stages, scroll up or right so quickly that your slower partners get crushed in the level geometry. It’s still fun with the right amount of patience and understanding, but it’s a lot like playing Monopoly; unless everyone’s at about the same skill level and in the right kind of mood, it’s a lot more likely to end when someone gets frustrated and quits. 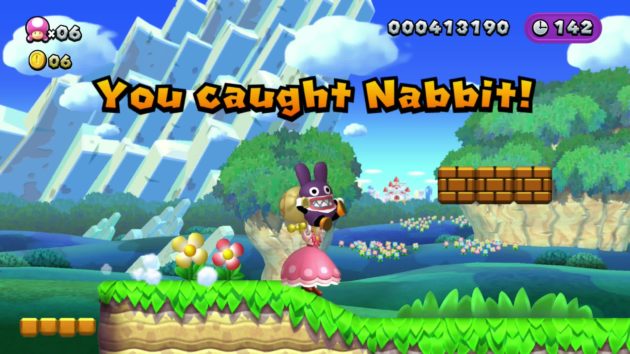 Which is a shame, because NSMBU is the kind of classic Mario platform game that’s built on equal parts nostalgia and raw challenge. It’s definitely here to celebrate the franchise, as it’s full of nods to the older games, but it’s not content to just be a nostalgia trip. It’s got more than its share of new gimmicks, power-ups, stages, enemies, and challenges, with some of the best level design in the business and a well-tuned but steep difficulty curve.

In Mario terms, it sits on a sort of odd border between Super Mario Bros. 3 and Super Mario World. I had no idea there was an argument between the fans of the two games until relatively recently, but NSMBU tries to split the difference. It’s got the verticality of SMB3, with lots of high jumps and hovering, with some of the tricky pinpoint jumps of SMW, an additional gimmick in the form of arc-lengthening spin jumps, and the presence of Yoshi. It’s easy to learn, surprisingly tricky to master, and offers a lot of challenges that are tough without being entirely unfair.

If you’ve been playing these games for most of your life like I have, it’ll remind you why. If you haven’t, it’s a good example of why Mario games are popular. Mario didn’t end up as the face of Nintendo for no reason, after all. 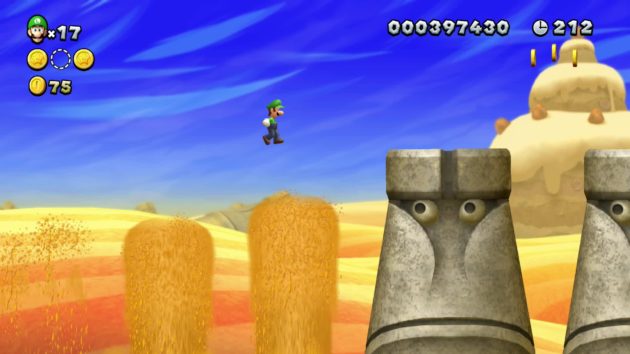 New Super Mario Bros. U Deluxe for the Nintendo Switch (US$ 59.99) is a compilation title that joins together NSMBU with its DLC, New Super Luigi U, with a few tweaks, a couple of minigames and additional challenges. It’s a little ballsy for Nintendo to offer a 6-year-old game at full retail price, even with its DLC included, but there is, at least, a lot of game here.

As usual, it starts with Princess Toadstool being kidnapped, but this time, Bowser opens the attempt by picking up Mario, Luigi, Toad, and the new character Toadette and throwing them halfway across the Mushroom Kingdom. A tree full of Super Acorns breaks their fall, however, and followed by a passing Nabbit, they immediately set back out across eight worlds of tricks, traps, pits, hidden coins, and assorted dangers to get back to Peach’s castle and save her.

You can switch between any of the five playable characters from the game’s world map, who share an item stockpile, but who have their own independent extra lives. Toadette, who takes up the slot that used to belong to the generic second Toad from the original NSMBU, has been added to the game as an explicitly easy-mode option. With the acquisition of a new power-up, the Super Crown (which you may remember from that time last year where it accidentally took over the Internet for a while), she transforms into Peachette. As Peachette, she can double-jump, float slowly in mid-air, and survive a single drop into a bottomless pit without losing a life. You still lose the power-up if you take a hit, but on many stages, using Peachette still feels a lot like cheating.

What feels entirely like cheating is using Nabbit, who I’d always thought was supposed to be some kind of refugee Rabbid. Instead, he’s a thieving rabbit (Nab + Rabbit = Nabbit) who first shows up in single-player mode as a thief you have to track down. If you play as Nabbit, you can’t use any power-ups, but you also can’t be damaged by contact with enemies. Nabbit either passes right through them or bounces harmlessly off them. It trivializes a lot of stages, since Nabbit can plow through enemies like they aren’t there most of the time, but since he’s limited to just jumping and running, he also can’t get to a lot of the secrets. He can clear stages like nobody’s business, but if you want to collect all the Star Coins and unlock the secret levels at the end of the game, you’ve got to go back with another character. 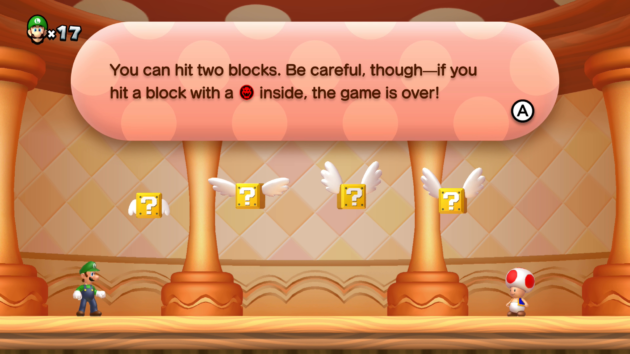 You can swap from NSMBU to the New Super Luigi U DLC via the main menu, which remixes the game a bit. It was released back in the day as part of the Year of Luigi celebration, celebrating gaming’s favorite second banana on his 30th anniversary.

It’s basically the same game as NSMBU, but remixed and changed up. Mario’s gone entirely, because this is Luigi’s show, to the point where all the characters in it jump like Luigi usually does. New Super Luigi feels like NSMBU with a low-gravity cheat; all four characters can jump about half a screen straight up, and feel like they’re floating the entire time. Each level is also shorter, more packed with enemies, and has a much shorter timer, however. It’s not quite a challenge mode so much as a remix, altering the entire rhythm of the game all at once.

You can also play a couple of minigames, time attack modes, and various challenge levels from the main menu. There’s one, Coin Boost, that feels like it’s meant to be a nod to the mobile game Super Mario Run, where a level automatically scrolls faster and faster as you collect more coins. It offers an entirely new sort of experience from the base game, where you have to abandon any attempts at precision in order to simply move as quickly as you can, but it didn’t do much for me.

New Super Mario Bros. U Deluxe is a new potential lease on life for one of the lower-profile Super Mario Bros. games, which before now, was stuck on the Wii-U. Playing it alone, it’s equal parts flashback and iteration, combining new tricks and features with a lot of the time-honored gameplay that put Mario on the map in the first place.

Playing it with friends … well, it’s a good way to see just how strong your friendship actually is. If you’re still speaking to each other after an afternoon of accidentally knocking each other into bottomless pits, then you can rely on these people no matter what. You can even hand a little kid Nabbit, so while the rest of you are bouncing off each other and flying into Piranha Plants, the kid can run around stealing everyone’s power-ups with no real fear of defeat.

Still, this is Mario. It’s the old-school sort of platform game that Nintendo built part of its initial empire off of, honed to a razor’s edge, with a colorful sweetness that covers up a slowly mounting challenge, and split up into easily-digestible stages for easy portable play. It’s probably a little too expensive for what it is, the minigames don’t really add much, and the multiplayer is a good way to start an argument, but the core of New Super Mario Bros. U Deluxe is rock-solid. Hour for hour, you’ll get your money’s worth here.