Rebel Galaxy Outlaw ($29.99 on the Epic Games Store) is a sprawling, open-ended game of space trading and combat that is aggressively uninterested in teaching you how to play it.

Most modern video games start with some kind of tutorial that explains their mechanics in excruciating detail, because other developers are worried that you might miss something important.

Outlaw has no such concern. Five minutes into a new game, it drops you off in deep space, equipped with little more than a couple of control tips, and leaves you alone to sink or swim.

It’s in the spirit of the deliberately user-unfriendly PC games of the ‘80s and ‘90s, which wore their impenetrability as a mark of pride. There’s a lot you can criticize about Outlaw’s gameplay or mechanics, but if you dig into it, it already addresses most of its own major issues. You just have no obvious way of knowing how.

In Outlaw’s defense, its director Travis Baldree has made his own video tutorials via streaming and YouTube, one of which (below) is linked to Outlaw’s page on the Epic Games Store launcher. That, in turn, highlights that Outlaw is an expansive, ambitious game, particularly for an indie project, and you can have a lot of fun with it once you know how. You need to do your (space) homework, though, or most of what Outlaw has to offer is hidden beneath a waxy layer of unnecessary boredom.

Outlaw, developed by Double Damage Games, is a prequel to the 2015 sleeper hit Rebel Galaxy. The “double” in Double Damage is Baldree and Erich Schaefer, two of the co-founders of the late Runic Games (Torchlight), and who expanded the company to five people to work on Outlaw. The team is split between Seattle, San Francisco, and Lewiston, Idaho.

Double Damage has been working on Outlaw for around three years. “We didn’t start on it right after the last game,” Baldree told me. “After Rogue Galaxy, I had a good six or eight months of working on the console versions, and recovery and just dealing with stuff. Then we actually prototyped a totally separate game, and it was cool, but somewhere along the way, I thought, okay, I’m not tired of Rebel Galaxy anymore. I’m going to prototype something and see if we’re excited about it, and we were.”

Then Baldree contacted Howard Day, an art director whose work he’d followed online for a decade.

“He’s also a big old-school Wing Commander fan, like me, and he did all the initial artwork for [Nightdive Studios’] System Shock reboot that they Kickstarted,” Baldree said. “When we brought Howard on, it solidified it.” 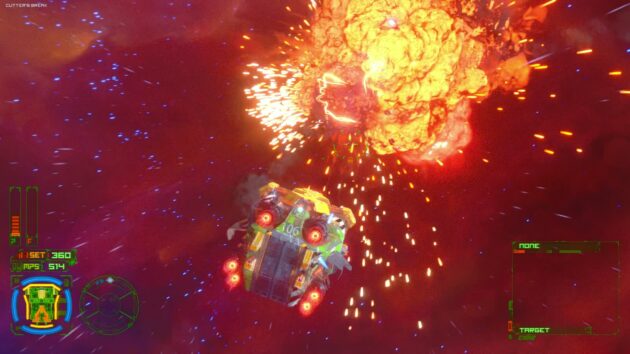 You play Outlaw as Juno Markev (Lani Minella), who appeared in the first game as the player character’s elderly aunt. In Outlaw, set almost 40 years earlier, she’s middle-aged, married, and trying to leave her smuggling days behind her.

When her husband ends up dead, Juno comes out of retirement to track down his killer, a pirate nicknamed Ruthless. After their first encounter, shown at the start of the game in an animated sequence made by Titmouse, Juno ends up marooned and penniless in the backwater Dodge Sector of the galaxy. She calls an old contact, borrows a battered cargo ship, and starts over from square one.

“It was a big change to have the player actually be a character this time out,” Baldree said. “It lets us do a lot of stuff we didn’t have the time and resources to do in the previous game. It was easier to write in a lot of ways because there’s a protagonist. You’re a faceless nobody in the last game, which was made in too little time, running down the clock on the bank account. More effort was put into this one.”

Your primary goal in Outlaw is to track down Ruthless for a rematch. You gather intelligence and resources by working odd jobs and doing favors on both sides of the law, as a bodyguard, mercenary, smuggler, cargo pilot, pirate, bounty hunter, and/or slave trader. 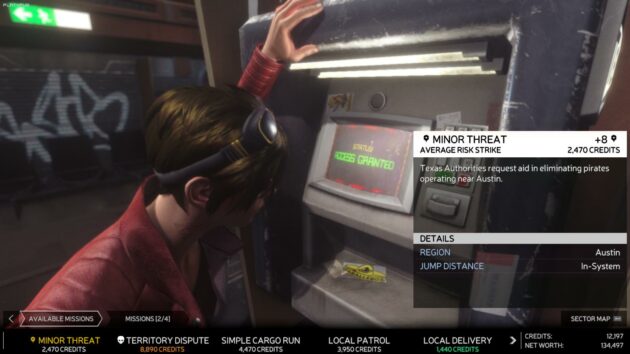 The original Rebel Galaxy was a naval combat game that happened to be set in space, where you flew a procession of frigates, lining up broadsides and pecking away with automated turrets. In Outlaw, you fly smaller, faster spacecraft, and are no longer limited to a single flat horizontal plane. The combat is now straight-up dogfighting, full of missile locks, aerial maneuvers, blaring heavy metal, and all the clashing cinematic sound effects that you shouldn’t actually have because you’re in space.

In the early game, Outlaw is as hard as it’ll ever be. You’re better off avoiding every fight you can for the first few hours, as the starting ship isn’t much more than a shoebox with wings. The combat is built around evasion, response, and quick reactions, none of which are readily possible until you’re actually in a decent spacecraft. Once you can afford a better ride and a few upgrades, so you can actually hope to survive all the cool space battles, Outlaw (I refuse to say “takes off”) improves dramatically.

There aren’t many games out there, in fact, which are as much of an improvement on their predecessor. The first Rebel Galaxy was a rushed project — “the last game was just seat-of-the-pants, contracting people to get stuff done as fast as humanly possible,” Baldree said — and relied heavily on procedurally-generated content. Every person who played Rebel Galaxy got a different set of planets and systems, with a high chance of running into random pirate encounters that they had no realistic way of surviving. 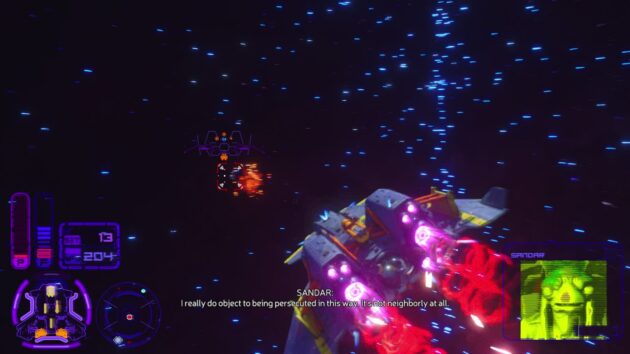 In Outlaw, the game’s universe is now hand-built, with a lot more thought put into its design and aesthetics. There are still random encounters, but they’re scaled now by the system you’re in, so it’s easy to stick to the less dangerous parts of the Dodge Sector until you’ve got a ship that can handle a real fight.

You can get out of your ship as Juno and check out the interiors of various stations and habitats, each of which have their own persistent sights, maps, markets, and NPCs, and all of which feel more worn down and lived-in right from the start. Outlaw’s version of deep space is good and grimy, like 1970s science fiction; it’s full of CRT monitors, neon signs, blocky text on black screens, and dark bars full of Jim Henson rubber aliens. When other pilots contact you, it’s on a flickering green monitor like an old closed-circuit TV. Each of the ships you can purchase looks beat-up and scarred, because you’re out on the fringe of explored space and nothing here is new.

The soundtrack is a particular high point of the overall experience, with more than 24 hours of licensed music split across seven in-game radio stations. I can already tell I’m going to end up with a couple of new favorite bands from playing Outlaw.

What I’ve lost more time to than anything else, though, is 8-Ball. For some reason, this space combat/trading game has a simple but fun pool simulator as a tavern game, alongside slot machines, dice poker, and an arcade machine that is clearly and legally distinct from Asteroids. I have blown a lot of my repair/upgrade budget in Outlaw on “just one more game” of 8-Ball, and am genuinely tempted to see how far I can get by pool-sharking across the galaxy. 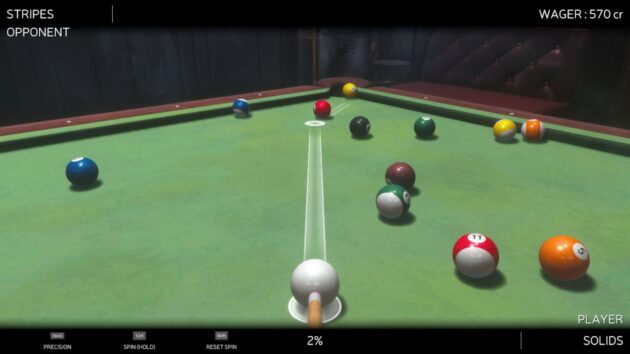 The sticking point, though, is still its lack of player guidance. There are a few little problems other than that, like how the mouse-and-keyboard controls are actually pretty bad, but the lack of any kind of in-game tutorial is easily Rebel Galaxy Outlaw‘s biggest problem.

I like Outlaw, and it’s a lot of game for $30, but it outsourced its own manual to its community. There are entire mechanics and features in Outlaw that you might never find on your own, and some of them are crucial to the experience. I’d never have made it out of the first system if I hadn’t read about asteroid mining on a message board, and I only figured out how to throttle back the ship’s engines because I heard someone else complaining about it. I had to consult two different out-of-game sources to figure out the mechanics behind the single best money-making endeavor, in a game where you spend most of your time scrambling for cash.

You can go on gaming websites right now and see people complaining about how Outlaw’s early game degenerates into a boring grind for cash, as you make penny-ante cargo runs to fund your first couple of upgrades. Ordinarily, you could chalk that kind of thing up to user error, but in Outlaw, they aren’t exactly wrong. They just aren’t used to a modern video game that hides its central mechanics like this.