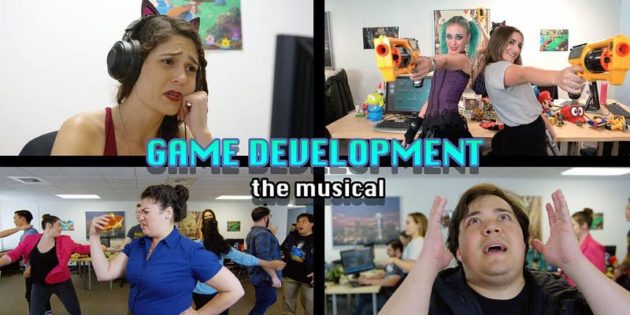 Working in the video game industry can be glorified by those who don’t understand the ins and outs of game development. Specifically, many people who play games still think a job as a game developer involves lots of playing games all day. (Sorry, that’s not the case.) And while it can be fun to work in the industry, it’s not free of problems. Many people who work in games still deal with insane hours, the gap between full-time and contract positions, and cyclical layoffs after projects are finished.

OK, maybe it’s not an obvious leap, but it is a natural one for game developer Andrew Lum, a 15-year veteran of the industry who has developed a stage show called “Game Development the Musical” as a side project. Lum and others from the production will be performing staged readings of the show (acting and singing without sets or choreography) at the Glenn Hughes Penthouse Theatre in Seattle at 7 p.m. this Friday and Saturday, Feb. 8 and 9.

The story of “Game Development the Musical” follows a small team of developers who work at a company called Future Games. The employees there hope to eventually land gigs at major studios, working on AAA games, but first, they have to start by developing “licensed shovelware games.” It’s a situation most game developers have experienced at one point in their careers, making the show easily relatable to those in the field.

You can check out the opening number below.

Lum knows the industry well based on his experience making games for companies including Big Fish Games and Glu Mobile. He was also previously founder and creative director at Fugazo, a game development startup in Seattle, and he’s currently director of gaming at The Pokémon Company.

But he believes the show will also resonate with people who don’t make games.

“If you’ve ever had a bad job, bad boss, or bad client then you’ll instantly relate to the story even if you’ve never worked at a tech company. Most every working adult has that moment where they realize their dream job isn’t as glamorous as they thought,” he said. “Don’t get me wrong, there are a lot of jokes and materials for the typical gamer and geek audience, but you don’t need to be a gamer or geek to enjoy this show.”

“Game Development the Musical” started off as a web series, but while creating that content, Lum realized it could turn into something more.

“One of the episodes was focused on layoffs and I wanted to have a big dance spectacle to convey how crazy layoffs can feel,” he said. “I ended up writing a song called ‘Everyone is Replaceable.’ That’s when I realized that the over-the-top format of musical theatre was perfect for the crazy but totally true stories about working in the game industry.”

Though the show is still in its very early stages, Lum has high hopes for its future.

“I know it sounds crazy, but my long term goal is to take ‘Game Development the Musical’ to Broadway,” he said. “I’ve got a long way to go, though. A  staged reading is just the first step in the long road to Broadway.”