How much do you think about nuclear power?

If you’re like most Americans, the answer is likely “not often.” Unless you work in the industry, you don’t hear too much about nuclear power these days, as Big Oil and coal face off against solar and wind.

The former head of the Nuclear Regulatory Commission wants to change that. In his latest book, Confessions of a Rogue Nuclear Regulator, Dr. Gregory Jaczko says that we not only should be thinking more about the consequences of nuclear power, we should be way more concerned about it than we are.

Jaczko headed the NRC from 2009 to 2012 under former President Barack Obama. During his tenure, he oversaw several of nuclear’s worst battles and disasters, including Yucca Mountain, the proposed nuclear waste depository, and the Fukushima meltdown in Japan. He writes that what he witnessed was an agency overpowered by the agenda of the nuclear industry. Decisions were based on politics, not safety or the public’s best interests. After witnessing several close calls with plants and the aftermath of Fukushima, he’s come to the conclusion that there is no such thing as safe nuclear power. 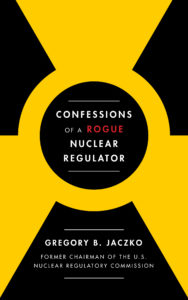 Why did you decide to write a book?

I’d had a unique experience. I learned a lot in the job about the process of how nuclear power plants are regulated. I think it’s important for people to understand the influence that the industry has, that Congress has, and these are lessons that are true in any safety-sensitive industry.

The more pressing issue for me right now has developed the last couple years, and it’s the recognition that a lot of people are turning to nuclear as the savior of climate change. I have two kids and I’m extremely worried about climate change, but I’m even more worried that nuclear is a solution that people are pushing.

It’s a bad solution. It’s not the cheapest, and it’s a very expensive way to reduce carbon. And it’s an unreliable partner for climate change. You can have accidents and that can shut down plants, and that comes with all the environmental issues with nuclear itself.

That brings us to Bill Gates’ end of 2018 letter, in which he says that nuclear is essential for combating climate change.

Yeah, I think I actually saw that article, and I worry because I do think the history of nuclear technology shows that it’s not reliable. If you look today at the cheapest ways to generate electricity, it’s solar, it’s wind, it’s geothermal. These methods are a lot cheaper and only getting cheaper.

The biggest argument against them is the dispatch problem — you can’t always have them when you want them, but battery storage is also rapidly dropping in price. I look at those kinds of stories, and I scratch my head. I don’t really understand where those new nuclear technologies are coming from. His [Gates/TerraPower’s] technology is unproven and at least one decade, if not more realistically two, out, and they’re strategizing based on tech from China, and because of Trump policies they had to pull back on that project.

It’s not there. It’s not a solution. That’s just putting our head in the sand.

You are now working in renewable energy projects yourself?

I started in the offshore wind space about three or four years ago. Lo and behold, last month, three companies each bid $135 million just for the right to build offshore wind farms off Massachusetts. They think they can produce that power at almost competitive wholesale electricity prices. Even three years ago, we were not predicting that.

What’s happening in that clean energy space is dramatic. The tech is advancing so fast and the cost reductions are happening so fast, that’s really where the input should be going.

Why do you think Bill Gates and others are still pursuing nuclear?

Well, I’ve never met Bill Gates, and I would certainly ask him if we met [laughs].

I started my career as a scientist, and there are a lot of technical features to nuclear that make it very attractive. I don’t think there’s anything wrong with trying to come up with better nuclear fission technology, but it’s not going to combat climate change. In the short term, we could work on better nuclear, but if it comes to spending money on nuclear or other renewable energy sources, it would make more sense to invest in the other.

We have one of the biggest examples in Fukushima [2011], and my experiences dealing with the accident there. One by one, the Japanese shut down all their nuclear power plants, and you have a country of the Kyoto Protocol with very aggressive climate goals, and they hinged on this fleet of nuclear reactors. And you have one accident, and all this human suffering aside, and this technology has torn apart your goals for climate change.

There was certainly the immediate harm, but you’ve damaged your longer-term goals for saving the planet. Their carbon went up as they had to turn to all these dirty fossil fuels, and now they’ve started to come down. And they’ve done a tremendous amount since in energy efficiency. If they’d one this 20 years ago, they wouldn’t be in that situation today.

Before stepping into the role, did you have any idea how messy politics in the agency were?

I spent time working on the Hill for a congressman and a senator, and I’d had my taste for politics always as a staffer. There is always a difference between a staffer and principal. When I became chairman I was the principal. Then I realized the power that was at stake, the influence that was at stake, and the stakes were so high, it was going to be intense.

The nuclear power industry is tens of billions, and electrical utilities are some of the most powerful in the country. My first encounter with [Obama’s chief of staff] Rahm Emanuel, it was a very direct communication style, and it certainly made an impression on me. I realized what was at stake then, all the idealistic aspirations I hoped I maintained were going to run up against some practical and political powers.

I was trying to strike balance between public safety and the industries that operate. It was a delicate balance. The Fukushima accident is when I crossed that threshold that my job was foremost health and public safety and that was it. If we weren’t going to do it, who was? And the accident really galvanized that for me.

How do you see the future of nuclear power progressing under the Trump administration?

Well the thing the president has tried to do the most, coupled with the strategy to keep coal plants operating, has been comparable. He hasn’t gotten as much attention to subsidize nuclear power plants, and thankfully those efforts have been unsuccessful because I think those are mistakes.

Coal plants and nuclear plants are just too expensive to operate, and the focus has been on preserving them, but they’re being replaced by solar, wind, some gas, which is not ideal but I think other technologies will catch up and replace gas.

To me, the best thing anybody can do in the government, despite what the president says about climate change, is to just stay out of it. In many parts of the country, the market is doing the right thing. In many cases, the right pocketbook approach is the environmental approach. This is one place where the government needs to step out of the way and let the market take over.

Knowing what you know now, would you have still taken the job?

Absolutely. It was a great privilege to have the job. There was one moment when I was sitting across from my counterpart in Japan [during the Fukushima aftermath], and we both looked at each other and realized that we were both relatively young [around 40]. In that moment, I knew there was a reason we were there, if for no other reason than I could relate to this individual.

It was a great experience. It was hard, but at the end of the day, I got up knowing what I was doing and why I was doing it, and I was doing something to help people. And those jobs don’t come often.

Confessions of a Rogue Nuclear Regulator by Gregory B. Jaczko is out now.