It’s doubtful anyone alive today will get to ride through the ice volcanoes of Saturn’s largest moon — but you can do the next best thing at Seattle’s Pacific Science Center, thanks to a mixed-reality experience called Expedition Titan.

The walk-through production is the latest showcase for Hyperspace XR, a startup-in-residence that’s pioneering the frontiers of mixed reality at the science center.

That frontier is associated with other labels of immersive experiences, including virtual reality (MR), extended reality (XR) and augmented reality (AR). Hyperspace XR’s brand of mixed reality involves creating a real-world environment — complete with walls, doorways and furnishings — that you experience in virtual reality with the aid of a headset.

For example, when you strap on a backpack laden with electronics and put on your VR goggles, it looks as if you’re inside a spaceship, walking to a bench in a hangar-sized observation deck. But you’re actually walking through a sparsely furnished maze whose walls that have been marked with abstract black-and-white patterns. Those patterns help Hyperspace’s software figure out how to maintain the visual illusion in your VR goggles as you move around.

In your headphones, you hear a virtual guide talk you through a blastoff to Titan, a walk-through of a visitors center on the moon’s surface, and a ride through the depths of a cryovolcano. You’re even called upon to turn on your gesture-controlled blaster and clear away falling rocks in the volcano’s cavern, lest you be crushed to smithereens. (Spoiler alert: You’ll survive, even if you’re a terrible shot.)

Breezes from air vents and rumblings from vibrating floors add to the sense that you’re really in the place you see through your headset.

At the end of the 15-minute adventure, you’re rewarded with a goggle-filling view of Saturn and its rings, hanging above the horizon.

This isn’t the first fantasy for Hyperspace XR, which began building mixed-reality experiences at Pacific Science Center two years ago. In February, my GeekWire colleague Kurt Schlosser went through the startup’s previous adventure, a magic-laced tour called Wonderfall. (For what it’s worth, he and his son loved it.)

Hyperspace CEO Jeff Ludwyck said experts on museum exhibits gave Wonderfall a high rating, but told him that the area required to run the tour would have to be shrunk from 3,000 square feet to about 1,000 square feet if he wanted to make the business model work.

Another lesson from the Wonderfall experience is that variety is the spice of VR life. Now Ludwyck envisions creating a mixed-reality space that can accommodate four or five completely different VR tours with the flick of a switch.

Titan is intriguing on several counts, especially for science centers:

It’s the second-largest moon in the solar system (only Jupiter’s moon Ganymede is larger). It’s the only moon that has a thick, opaque atmosphere, consisting of nitrogen and smoggy hydrocarbons. It’s the only celestial body besides Earth known to have liquid on its surface, in the form of lakes and rivers of methane and ethane. It has what appear to be dunes and ice volcanoes, and scientists say it could contain the precursors of life’s chemistry.

In June, NASA gave its go-ahead for a mission called Dragonfly, which aims to deliver a nuclear-powered drone to Titan’s surface in 2034.

All this made Titan a natural focus for Hyperspace’s next adventure.

“We love space, and Mars is overdone,” Ludwyck said. “So we went with the only other potentially habitable planet in our solar system.”

That statement could spark an argument with some planetary scientists — over Ludwyck’s use of the word “planet” to refer to a moon, for example, or over the potential livability of a world whose maximum surface temperature is 290 degrees below zero Fahrenheit. But that didn’t keep the planetary scientist who accompanied me on my Titan tour, Baptiste Journaux, from enjoying the experience.

“That is very impressive,” said Journaux, a postdoctoral scholar at the University of Washington who’s associated with the NASA Astrobiology Institute. 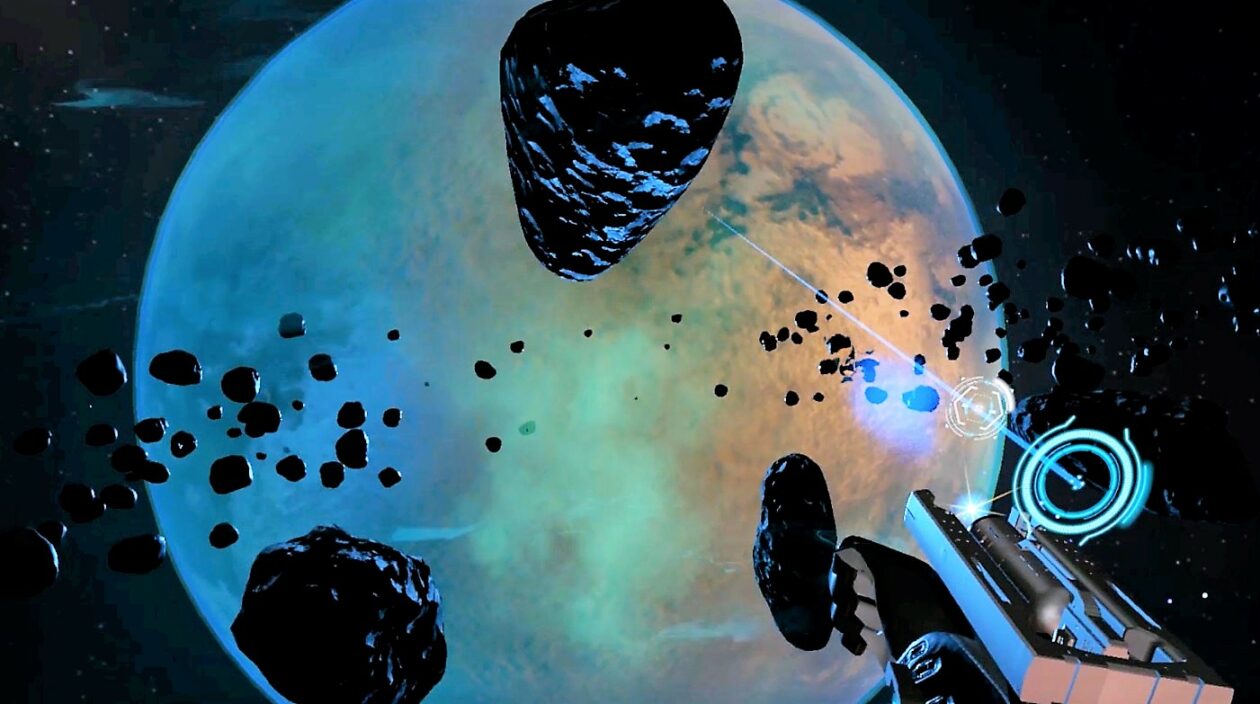 Before reaching Titan, travelers have to blast through asteroids. (Hyperspace XR Graphic) 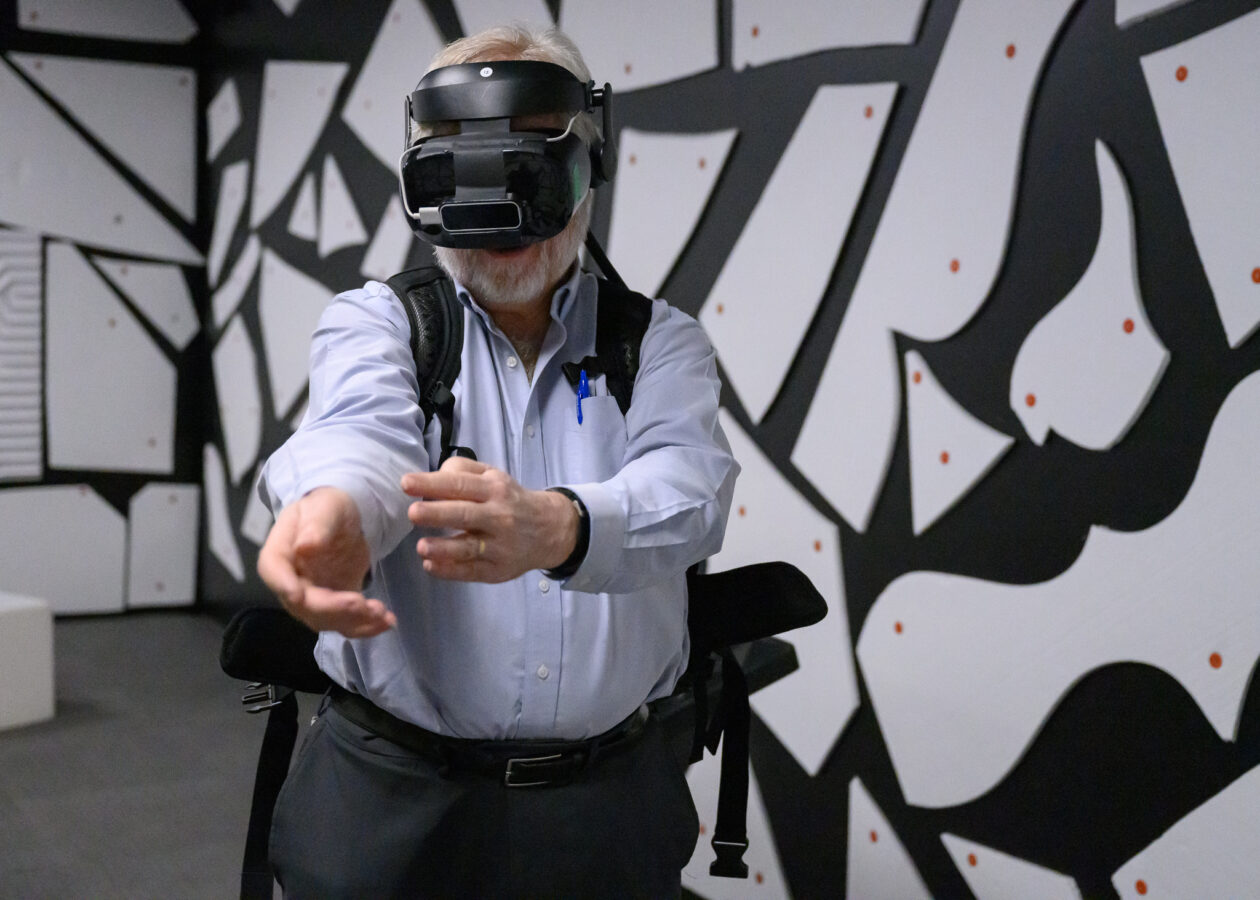 GeekWire’s Alan Boyle tries to use hand gestures to fire his virtual-reality blaster, without much success. (GeekWire Photo / Kevin Lisota) 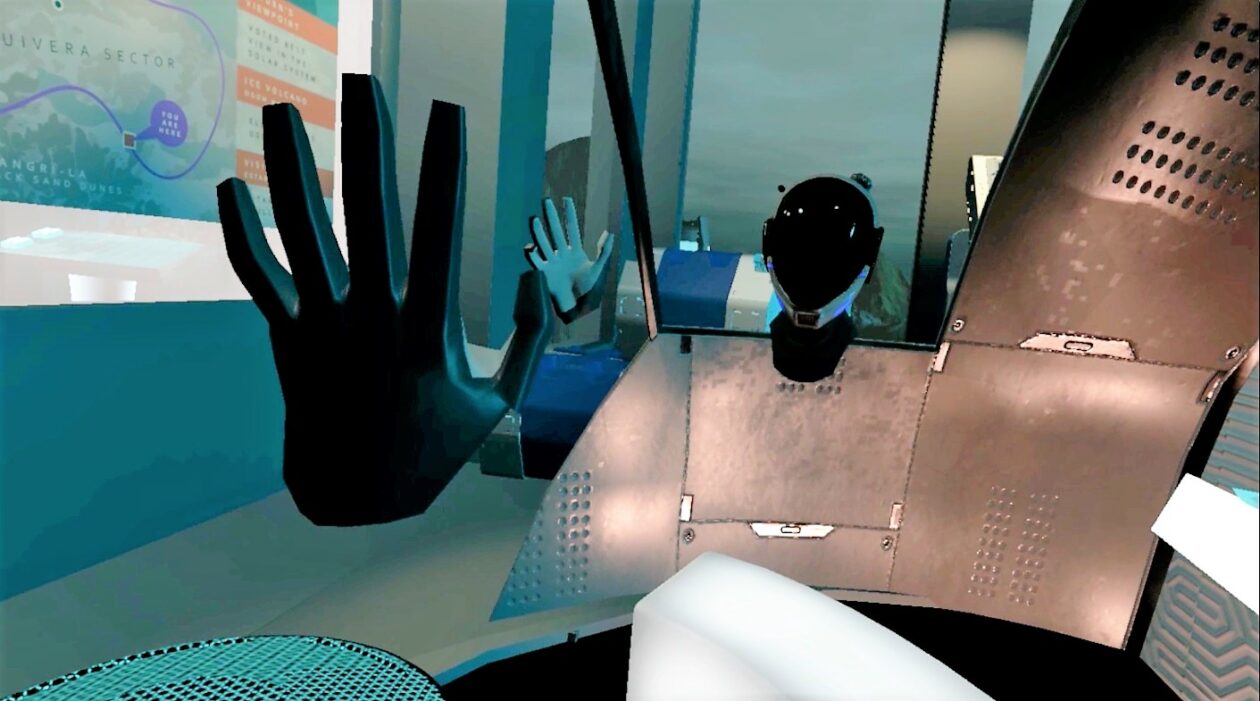 In the virtual-reality view, Expedition Titan explorers can see their own hands, as well as the disembodied hands and helmets of other crew members. (Hyperspace XR Graphic) 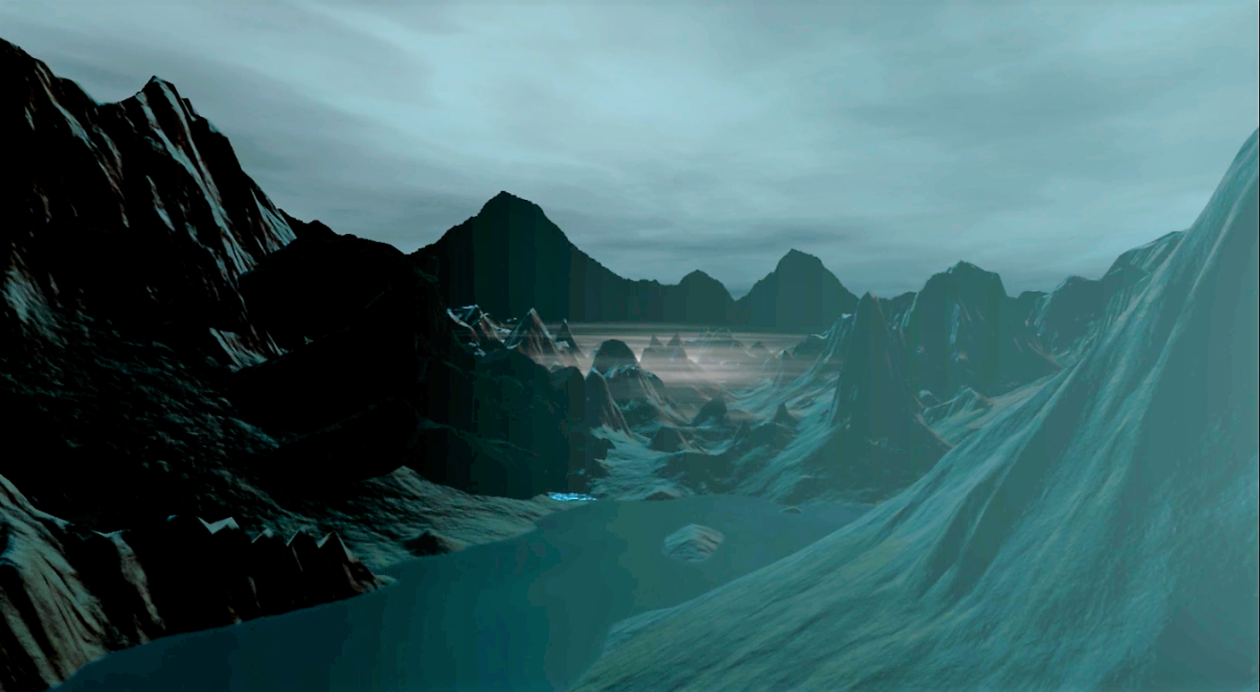 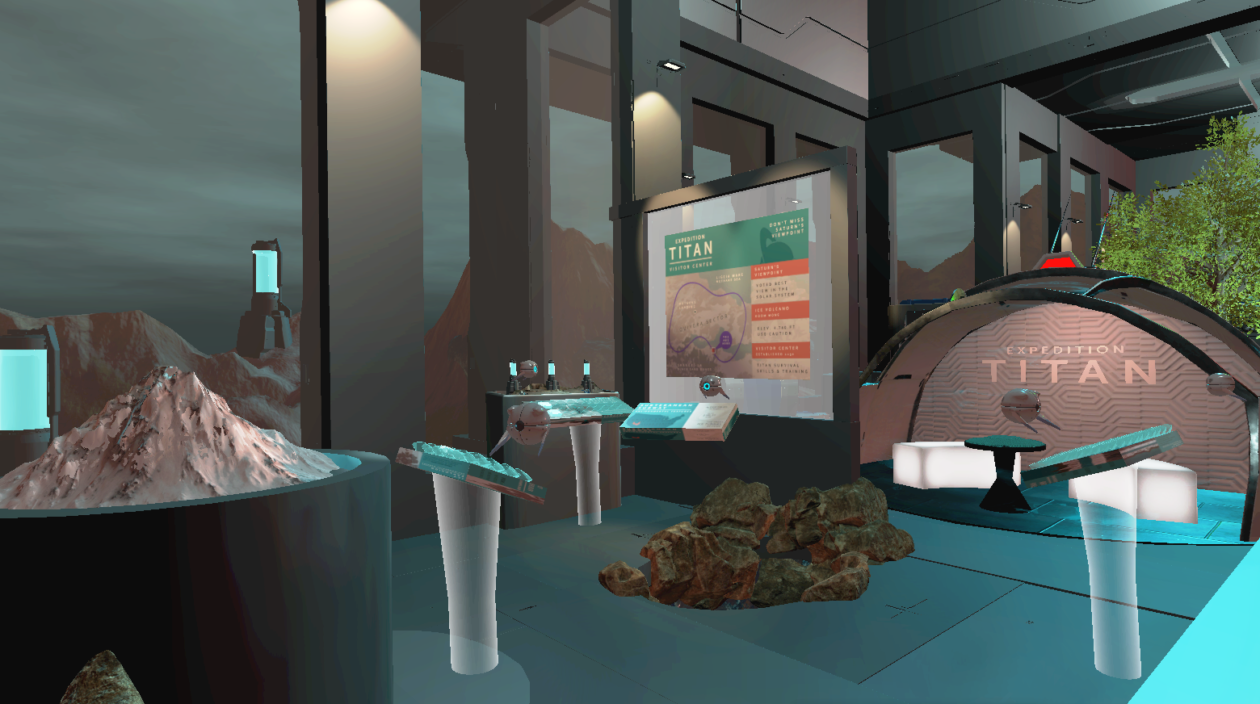 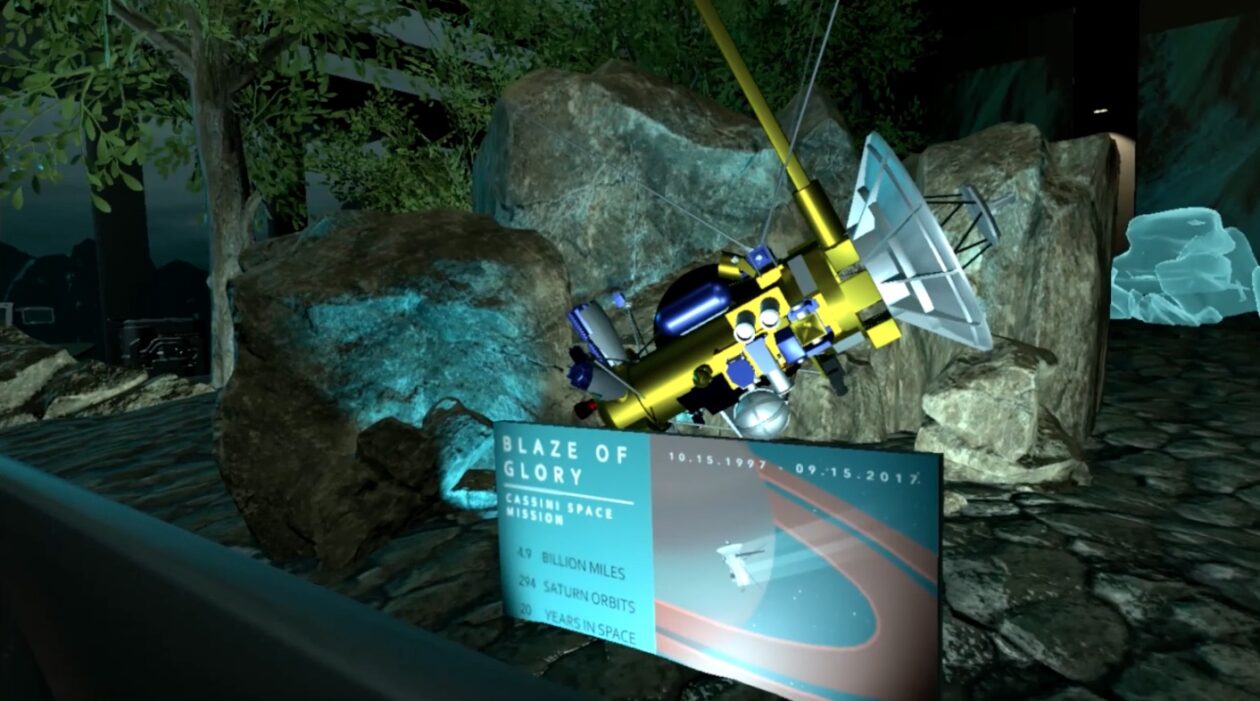 Expedition Titan’s visitors center includes a virtual-reality tribute to the Cassini orbiter, which studied Titan and its moons until 2017. (Hyperspace XR Graphic) 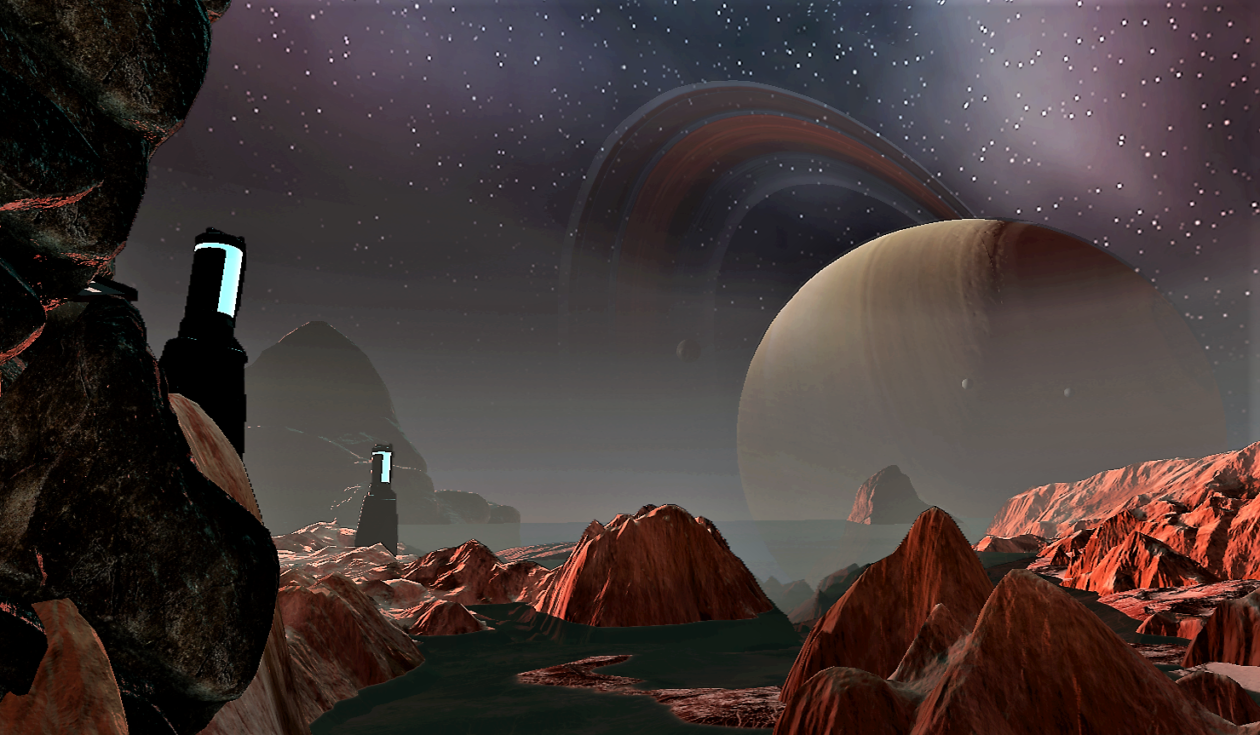 Journaux had a few quibbles about the science, as you’d expect from someone who specializes in the study of icy moons, including Titan as well as Europa and Enceladus. He pointed out that the eruption threatening to engulf us during our trip through an ice volcano was more likely to consist of slow-moving slush than fast-rising lava. And because Titan is in roughly the same orbital plane as Saturn’s rings, we wouldn’t be able to get the impressive off-angle view of the rings that served as the big finish for our tour.

Such quibbles should be easily fixable — or at least forgivable.

“We’ve taken creative liberties,” Ludwyck acknowledged. “But we’ve also tried to give facts about Titan. The real goal of this is, when people walk out, to have this ‘wow’ moment, like, ‘I just traveled there … and I learned some things along the way.’ It’s more important that we give them a really exceptional experience.”

When we went through Expedition Titan, the software was still officially in beta mode, but Hyperspace’s team is closing in on Version 1.0.  One of the priorities is to align Hyperspace’s virtual-reality world more precisely with the real-world furnishings, to make sure you don’t run into a wall when you think you’ll be walking through a doorway.

Diana Johns, the Pacific Science Center’s vice president of exhibits and life sciences, said having the center’s patrons participate in the fine-tuning process is one of the strengths of the startup-in-residence program.

“There’s this symbiosis between having a startup here and what we’re trying to do in our mission: connecting more with our community and showing the community what we’re doing,” Johns said. “It just works, if it’s the right product. In terms of technology, our guests love that. They’re interested in things like VR, AR, MR, AI, all of those things. It’s stuff that we think our guests are actually going to want to be participants in.”

Expedition Titan is open to ages 10 and up at the Pacific Science Center, located at Seattle Center. Tickets are $15 for the general public, $12 for members. To learn more about Titan and Saturn, check out NASA’s Solar System Exploration website as well as the websites for the Cassini orbiter mission, the Huygens lander mission and the upcoming Dragonfly mission. To learn more about what Baptiste Journaux studies, check out his personal research page and NASA’s project page for “Habitability of Hydrocarbon Worlds: Titan and Beyond.”