Expedia and Ryanair have agreed to voluntarily dismiss a lawsuit brought against the online travel giant by the European budget airline, according to filings in federal court in Seattle.

A spokesperson for Bellevue, Wash.-based Expedia Group confirmed that the companies reached a settlement but said the terms are confidential.

Ryanair filed the suit in December 2017, accusing Expedia of illegally scraping information from the airline’s website to offer flights against Ryanair’s wishes, in some cases allegedly charging extra fees that resulted in higher costs for travelers. Expedia had countersued, accusing Ryanair of “improperly using its monopoly position in the flights markets to eliminate competition in other markets, including the markets for flight/hotel/car packages.”

However, Expedia was unsuccessful in its efforts to dismiss Ryanair’s suit, even after appealing to the Ninth Circuit Court of Appeals.

A search of Expedia’s UK site hints at the outcome of the settlement, showing a range of Ryanair flights still available to book through the travel site. Ryanair didn’t respond to a request for comment. It’s not yet clear if a separate suit filed by Ryanair against Expedia in Ireland was also resolved as part of the settlement. 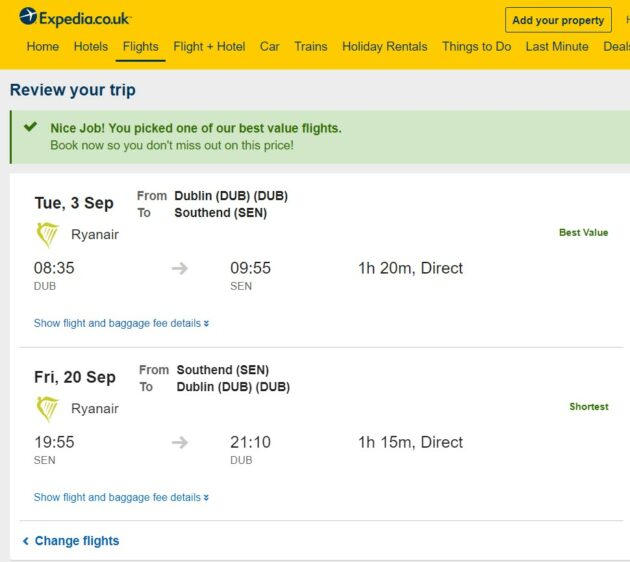 The suit illustrated a common point of tension between Expedia and its hotel and airline partners, as many of them seek to encourage direct bookings by customers through their own sites.

Expedia is involved in a separate contract dispute with United Airlines, with the airline planning to withhold fare data from Expedia after Sept. 30 to thwart bookings on the travel site.

Okerstrom was answering a question about large hotel chains, but he said it’s “a conversation that we increasingly have been having with our airline and other partners as well.” He said the company believes the approach is “absolutely the right way forward.”