Big deals led to a banner year for U.S. digital health investments, which shot up 21 percent to $8.6 billion in 2018, according to a report from PwC and CB Insights. Total venture capital investment was the highest it’s been since the dot-com era at $99.5 billion. That means digital health, which includes everything from biotech to fitness companies, claimed an 8.6 percent slice of the funding pie.

The number of VC-led investments remains below its peak three years ago, but the average deal size has doubled in that time to $18 million. Around half of all investment went to companies in the seed stage or series A rounds, according to a separate report from Rock Health.

These were the top three digital health deals last year: 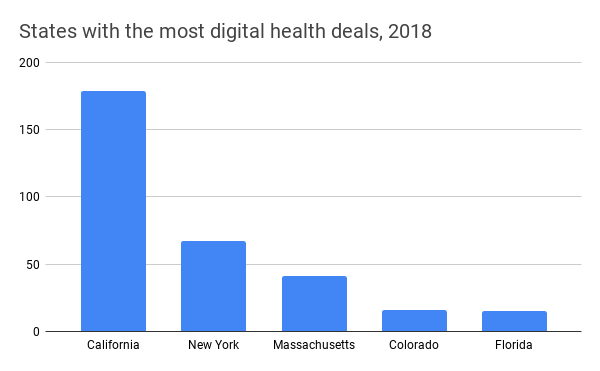 Washington state had six deals, of which DNA sequencing company Stratos Genomics’ $20 million round in January 2018 was far and away the largest. Individualized vitamin subscription service Persona’s $7 million round came in second for the state.

Is digital health in a bubble?

Analysts at Rock Health don’t think so. They argue that digital health companies are shifting toward proving their fundamental value up front rather than raising hype.

Firms have been raising more money more frequently, which indicates they’re burning through cash. But the analysts said that may be necessary to overcome slow sales cycles and achieve the scale necessary to compete with incumbents.

Moreover, prior investors came back for more in recent rounds, and evidence of alleged fraud seems contained to notable outliers, such as Theranos and Outcome Health.