Amazon’s reimagination of the neighborhood around its urban headquarters in Seattle is apparently infectious, as a new condo development planned for a block away from The Spheres will feature a slew of geeky amenities apparently aimed at attracting tech workers.

Seattle House is a pair of 45-story residential towers planned for a location on Sixth Avenue between Bell and Battery Streets on the site of the former Antioch College. The property is being developed by Vancouver, B.C.-based Concord Pacific and Seattle-based HB Management, and according to a news release Tuesday, they plan to redefine “vertical living.”

The towers will feature approximately 600 units, with studio, one- and two-bedroom floor plans being offered. The towers will sit atop a marketplace and “podium” that will include roughly 300 executive or long-term-stay dwellings.

“High above the city traffic, while others battle their commute, you can transcend your body, mind and spirit from the convenience of your home,” reads a description on the development’s website. Check out this video:

The perks of Seattle House are aimed at “the most social and entrepreneurial of urban dwellers” who are “seeking a wellness oasis.” Those perks include:

“Seattle House will be all about community and infusing smart urban design into one of the most exciting, forward-thinking areas of downtown Seattle,” Peter Webb, senior vice president of development at Concord Pacific, said in the news release. “This project is rooted in thoughtful, fluid living. Everything from the exceptionally curated and well-planned amenities focused on maximizing time and efficiency to building offerings that inspire creativity and innovation.” 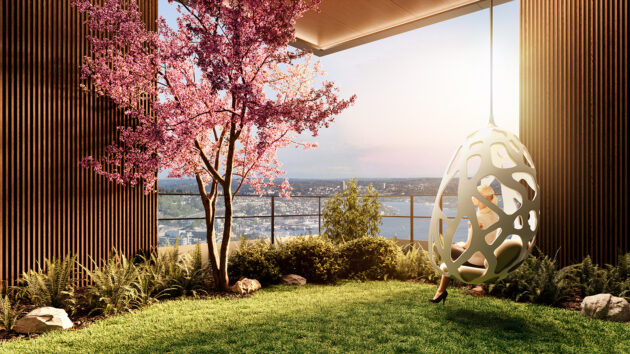