When I first saw Bill Gates’ summer book picks, I thought, “This guy knows how to party.”

The fact that his list is filled with heavy reads isn’t lost on Gates — he acknowledges his summer reading list tackles some pretty heavy topics:

“None of them are what most people think of as a light read,” he writes. “All but one deal with the idea of disruption, but I don’t mean “disruption” in the way tech people usually mean it. I’ve recently found myself drawn to books about upheaval (that’s even the title of the one of them) — whether it’s the Soviet Union right after the Bolshevik revolution, the United States during times of war, or a global reevaluation of our economic system.”

As Gates and the rest of us head into the summer vacation season, here’s a rundown of his favorite five.

Upheaval: Turning Points for Nations in Crisis by Jared Diamond 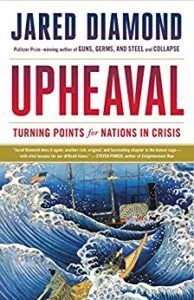 If you could be a fly on the wall in a conversation between Gates and Diamond, a distinguished professor of geography at the University of California, Los Angeles, and Pulitzer Prize winning author, you’d be lucky. Today is your lucky day.

Diamond is an exceptional academic, thinker and author. A few of his most prestigious honors include the National Medal of Science, a MacArthur Fellowship, and the Pulitzer for his New York Times bestselling book Guns, Germs, and Steel.

Gates sat down with Diamond to discuss his latest, Upheaval, which examines how societies react in moments of crisis. Diamond begins by framing crisis response from a deeply human level — how do people respond to crises in their own lives? Then he narrows these down to “12 success factors” to show how nations have managed crisis, including war and general malaise.

“I admit that at first I thought it might be a little strange to borrow from a model of a single person’s emotional turmoil to explain the evolution of entire societies,” Gates writes. “But it isn’t strange at all; it’s revealing.”

“I love all of Jared’s books. I still rank Guns, Germs, and Steel as one of the best things I’ve ever read,” Gates writes in his review, adding that even though this book tackles heavy topics, it left him feeling “optimistic” about being able to solve complex problems.

Nine Pints: A Journey Through the Money, Medicine, and Mysteries of Blood by Rose George 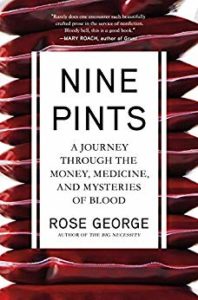 British journalist George delves into the widely unknown, untouched and misunderstood in her work, covering everything from refugees, to human waste, to the world of shipping containers. In her latest, Nine Pints (a reference to how much blood is in the human body), she goes into the world of blood — necessary for survival and at times deeply problematic, this book “will leave you with a new appreciation for blood,” Gates writes.

Appreciating a deep dive into topics, Gates says that he’s personally interested in the “topic of blood and diagnostic tools that involve blood,” which shouldn’t be surprising considering that the Gates Foundation works with many healthcare initiatives around the world. He also reveals that he’s investing in companies pursuing blood-related advancements: “I recently started making investments in blood tests that would help detect Alzheimer’s disease years or even decades before disease symptoms show up. I’m also involved with a company that’s trying to speed up the search for blood tests that can detect cancers.”

George came to blood as a topic because of her own life — she has premenstrual dysphoric disorder, or PMDD. If you don’t know what PMDD is, it is no garden-variety PMS. PMDD is an incredibly painful and life-altering condition that leaves George writhing “on the floor in pain and gives her such dark thoughts that she has to ‘avoid a nearby road bridge because I don’t have the defenses to stop myself from jumping off it,’ ” Gates writes in his review.

In Nine Pints, George travels the world, examining our unique relationships with the fluid that gives us life, covering blood and plasma donations, and how cultures view and treat women’s periods. While there are some serious moments in the book, and quite sad ones as many women turn to prostitution to afford sanitary pads, “It’s called ‘sex for pads,” he writes, Gates found the book not only enlightening but “uplifting, especially the parts that reminded me of the life-saving innovations that emerge from a better understanding of blood and its component parts.”

A Gentleman in Moscow by Amor Towles 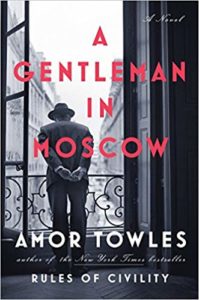 This novel was published in 2016, but Gates says he finally picked it up thanks to his brother-in-law sending a copy. A fan of Russian literature, Gates says that you don’t need to love reading about Russia to enjoy this “fun, clever, and surprisingly upbeat look at Russian history through the eyes of one man.”

Towles’ novel follows Count Alexander Ilyich Rostov, who is sentenced to house arrest in Moscow’s Metropol Hotel for the rest of his life. Set in 1922, right after the Bolsheviks have taken power, the book covers the next 30 years of the Count’s life in the hotel. Gates says while this is historical fiction, it could just as easily be a thriller or a love story.

He writes that he has stayed in the novel’s hotel, the Metropol, and that the location across from the Kremlin lends credibility to setting the scene for historical events and the Count’s perspective. “By the end of the book, I felt like the Count was an old friend.”

“Towles keeps the focus on the Count, so most major historical events (like World War II) get little more than a passing mention,” Gates writes in his review. “But I loved seeing how these events still shifted the world of the Metropol in ways big and small. It gives you a sense of how political turmoil affects everyone, not just those directly involved with it.”

Gates says this is a crowd-pleaser, no matter your taste, and he and Melinda read it at the same time. Perhaps this is a great pick for your summer book club.

Presidents of War by Michael Beschloss 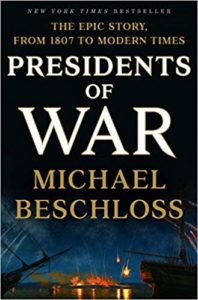 While Presidents of War covers many war-time leaders, Gates says it was his initial interest in the Vietnam War that made him pick it up.

“If I had been just a year or two older, I might have been called to serve in the Vietnam War,” he writes in his review. “I think that’s one reason why I’m so interested in books and movies about the war. I always come back to the same question: If I had fought in the war, would I have showed courage under fire? Like many people who have not served, I have my doubts.”

Gates says he spends a lot of time thinking about who leads during war, and even though Vietnam spurred him to pick up Beschloss’ book, its “broad scope lets you draw important cross-cutting lessons about presidential leadership.” The author looks at nine major conflicts from the turn of the 19th century to the 1970s: “the War of 1812 (James Madison), the Mexican-American War (James Polk), the Civil War (Abraham Lincoln), the Spanish-American War (William McKinley, Theodore Roosevelt), World War I (Woodrow Wilson), World War II (Franklin Roosevelt and Harry Truman), the Korean War (Dwight Eisenhower), and the Vietnam War (Kennedy, Johnson, and Nixon).”

“By the time I finished it, I learned a lot not only about Vietnam but about the eight other major conflicts the U.S. entered between the turn of the 19th century and the 1970s. Beschloss’s broad scope lets you draw important cross-cutting lessons about presidential leadership,” he writes, adding that those leaders who handle conflict well show “good judgment, moral courage, emotional stability, and curiosity” during times of war.

The Future of Capitalism: Facing the New Anxieties by Paul Collier 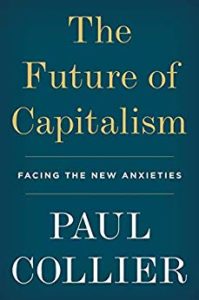 “I’m a big fan of Paul Collier. A highly respected Oxford economist (and a knight!), he has spent his career trying to understand and alleviate global poverty,” Gates writes in his review. “His book The Bottom Billion is still on the short list of books that I recommend to people, even though a lot has changed since it was published 12 years ago.”

While capitalism is credited with improving life for many around the world, as GDP and lifespans have grown for many, there are many questions about the capitalist systems that have helped produce those gains, systems that have faults and are “in crisis.”

Collier says the problems with capitalism can be broken down into three things: The divide between booming cities and struggling small towns (hello, Coasts vs. Middle America); Those who have a college education and those who don’t; and a global divide between countries doing well, and ones that aren’t.

The result? “Collier says, capitalism is delivering for some people but leaving others behind,” Gates writes in his review. “For example, he makes a point that should feel familiar to anyone living in London, New York City, or my hometown of Seattle. Highly skilled workers have a big incentive to move to cities, where they can get high-paying jobs. When all those big earners cluster in one place, more businesses sprout up to support them. This large-scale movement into the city drives up the cost of land, making it less affordable for everyone else. It is a virtuous cycle for a lucky few and a vicious one for others.”

While Gates says he doesn’t agree with all of Collier’s suggestions for evening the playing field, he did find it a “thought-provoking” read, and one that is incredibly relevant for Seattle residents on either end of the spectrum struggling with the problems that come with income disparity and fast economic growth.

Looking for something a little lighter or more inspirational? Gates adds two more picks: Graeme Simsion’s The Rosie Result, the final book of a series with Don Tillman and Rosie Jarman helping their son Hudson fit in at school, Melinda Gates’ new book on lifting women and girls out of poverty and into purpose on a global scale.

“If you haven’t read the first two books in the Rosie trilogy, summer vacation is the perfect time to start!” he writes. “I also can’t resist a plug for Melinda’s new book The Moment of Lift. I know I’m biased, but it’s one of the best books I’ve read so far this year.”