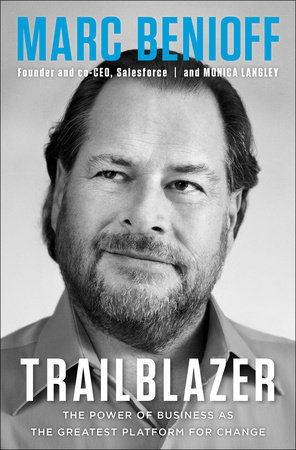 Marc Benioff’s new book, “Trailblazer,” is the story of the Salesforce co-founder and co-CEO’s emergence as an accidental activist on LGBTQ rights, the environment, immigration, gender pay equity and other issues that are increasingly demanding attention and action from global business and technology leaders.

But it was the issue of homelessness in his hometown of San Francisco that put Benioff most directly at odds with some of his fellow tech leaders.

Benioff was a vocal financial backer of Proposition C, a 2018 ballot measure designed to generate up to $300 million a year in new funds for shelters and mental health services by increasing, by an average of 0.5 percent, the gross receipts tax on companies with more than $50 million in annual revenue.

The proposition passed despite opposition from some well-known tech companies, including Lyft and Stripe, high-profile investors such Michael Moritz and Paul Graham, and perhaps most infamously, Twitter and Square CEO Jack Dorsey.

Hi Jack. Thanks for the feedback. Which homeless programs in our city are you supporting? Can you tell me what Twitter and Square & you are in for & at what financial levels? How much have you given to heading home our $37M initiative to get every homeless child off the streets?

But the surprise twist, revealed in the book, is that Benioff believes an earlier debate in Seattle influenced the way the issue played out in San Francisco. He writes that opponents of Proposition C seemed emboldened by Amazon’s successful effort to overturn a similar initiative in Seattle, a “head tax” passed by the City Council to fund homelessness services.

“I presumed that my fellow industry leaders had watched closely as Amazon had defeated a corporate tax proposition in Seattle earlier in the year,” he writes. “But I was determined not to let them follow that playbook.”

I presumed that my fellow industry leaders had watched closely as Amazon had defeated a corporate tax proposition in Seattle earlier in the year.

Seattle’s head tax is back in the news with word that Amazon is contributing an additional $1.05 million to a Seattle Metro Chamber of Commerce political action committee seeking to shake up the Seattle City Council, bringing its total contributions to the group to $1.45 million.

The reference in the book is notable in part because Benioff appears poised to play a larger role in Seattle, at least indirectly, through Salesforce’s $15.7 billion acquisition of Seattle-based data visualization technology company Tableau Software. Announcing the deal in June of this year, Benioff said Seattle will become Salesforce “HQ2” as a result of the Tableau acquisition, a thinly veiled reference to Amazon’s search for a second headquarters.

Amazon said at the time the head tax was repealed that the City Council’s reversal was “the right decision for the region’s economic prosperity,” and noted that the company was “deeply committed to being part of the solution to end homelessness” through its work with a variety of non-profit partners.

In the book, Benioff does give Amazon credit for “giving money and space on its campus to help the homeless,” and also references Microsoft’s $500 million fund for affordable housing in his broader summary of industry efforts to address the crisis.

Overall, Benioff makes the case in the book that “innovation cannot advance in a positive direction unless it’s grounded in genuine and continued efforts to lift up all of humanity.” He contends that the businesses that prosper in the years ahead will be those that develop and use technology to improve the state of the world.

“Trailblazer,” by Benioff with Monica Langley, was published Tuesday.