As bigger and bigger businesses take the plunge into cloud computing, Amazon Web Services is turning into a pretty big business in its own right.

Revenue from the cloud market share leader came in at $7.7 billion during the quarter, up 41 percent compared to the same period last year. Operating income was $2.2 billion, up 55 percent over the year-ago quarter.

Amazon profits more than double to $3.6B, setting another record

AWS has continued to grow revenue at better than a 40 percent clip over the last few years as competition from Microsoft and Google has heated up. Long-time customers continue to increase their spending on cloud services as their needs grow, and any chief information officer at a large enterprise without a cloud strategy is in the process of developing one. 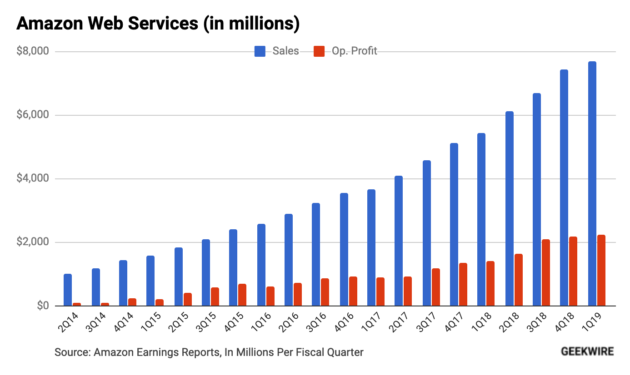 Coming off its annual re:Invent show last November, Gartner analyst Lydia Leong wrote on Twitter that AWS was seeing the lion’s share of big spending deals come its way, and it would appear that momentum continued into the first quarter. Operating margins have held steady during this period, coming in at 28.9 percent, up from the same period last year but down a bit from the second half of 2018.

After financial analysts declined to ask Amazon CFO Brian Olsavsky any questions about AWS during a conference call following the release of its results (who, in their defense, were surprised by the announcement of free one-day Prime shipping), he volunteered a few additional details about the group’s performance during the quarter.

AWS is now on a $30 billion annualized run rate, and “usage growth rates continue to be higher than revenue growth rates,” Olsavsky said. He acknowledged the slight dip in revenue growth from the fourth quarter of last year to the first quarter, down from 46 percent, but hinted that cloud revenue growth could become variable quarter-to-quarter over time as large enterprise companies structure spending contracts around their own quarterly plans.

Margins were steady thanks to improved efficiencies inside AWS data centers, Olsavsky said. “Every percentage utilization (gain) in our data center is worth tens of millions of dollars,” he said.