The new ad-free Apple TV+ streaming service has support from some of the biggest names in Hollywood, with stars including Reese Witherspoon, Steve Carell, Jennifer Aniston, Steven Spielberg, J.J. Abrams, and Oprah — who is making two documentaries and a live book club show for Apple TV+ — appearing on stage at the announcement. It will feature exclusive original shows and debut in more than 100 countries this fall. Pricing was not announced.

So the big obvious unknown: What, if anything, will Apple charge for the video service it (briefly) previewed today?

"Pricing and availability for the Apple TV+ video subscription service will be announced later this autumn. " So all sorts of unknowns about this…..however much it costs it's not a given that people who already pay for Netflix etc will want another subscription

Apple TV+ positions the company as a challenger to Netflix and Amazon Prime Video, which also produce original content and lead the U.S. market for paid video streaming services. But Apple also said it would be integrating its updated Apple TV app with Amazon Prime Video and the Seattle company’s Fire TV streaming hardware.

Introducing Apple TV+.
A new streaming service with original stories from the most creative minds in TV and film. #AppleEvent pic.twitter.com/xLhtdNNaa2

The common thread of Monday’s event is an expansion of Apple’s services business, moving the company further beyond software and hardware, and a focus on privacy as a competitive advantage against Google, Facebook and other companies that rely on advertising revenue to fuel their businesses. Apple’s Services business grew 24 percent in its 2018 fiscal year, to more than $37 billion.

WSJ internal memo says Apple News+ users will only get a "curated collection of general interest news." To access biz reporting, you'll still have to subscribe to the WSJ. Memo says "our collaboration with Apple will also extend to areas like video, voice, market data and AI."

Apple made a point of differentiating its approach amid broader economic and political threats to journalism, as well as growing privacy concerns.

“We believe in the power of journalism and the impact it will have on our lives,” said Tim Cook, Apple’s CEO, on stage at the Steve Jobs Theater at Apple HQ in Cupertino, Calif., after unveiling the new service. “We think Apple News+ is going to be great for customers, and great for publishers.” 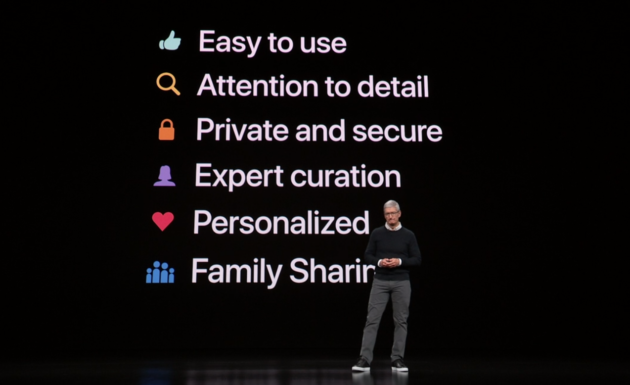 Apple says the service will also include premium digital subscriptions to the Wall Street Journal, TheSkimm and the L.A. Times.

“We don’t know what you read, and in addition to that, we don’t allow advertisers to track you,” said Roger Rosner, Apple’s vice president of applications. “What you read about in Apple News will not follow you across the web.”

The event was live streamed here.