When Amazon announced it would split its second headquarters between New York City and the Washington, D.C., area, it seemed like a glaring example of winner-takes-all urbanism where talent, money and jobs cluster in a handful of “superstar cities.”

But the Milken Institute’s annual report on the nation’s best-performing cities determined many smaller, often overlooked metros are actually outperforming coastal superstars. Researchers at the think tank evaluated cities based on metrics like job creation, wage increases and technological innovations emerging from each region. Amazon’s HQ2 picks didn’t break the top 10, though its original home of Seattle did.

The Provo and Orem metropolitan area in Utah topped the list, driven by its tech sector, educated workforce and business-friendly regulatory climate, according to the report. Cities in the San Francisco Bay Area tech sector claimed second and fourth place.

“Low unemployment rates and a shortage of skilled labor are spurring more competition for knowledge-workers, putting upward pressure on wages in the tech sector and widening the income gap,” the report says. 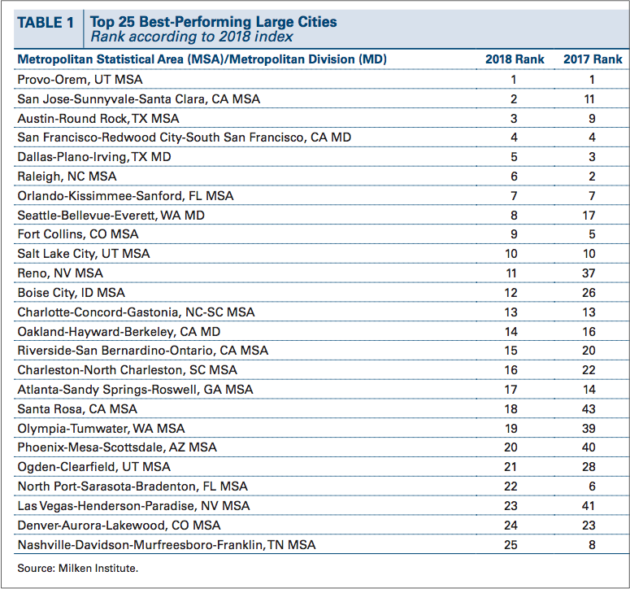 The Texas tech hub of Austin came in third, the Dallas metro area was fifth and Raleigh, N.C., sixth. All three of those cities made Amazon’s short list of HQ2 finalists.

Amazon’s hometown, Seattle, rose in the rankings to eighth place, “where the second strongest high-tech sector in the country raised wages, rents and employment in the metro,” according to the report.

Milken has been publishing its “Best-Performing Cities: Where America’s Jobs are Created and Sustained” report annually since 1999. Researchers study 200 big cities and 201 small cities and rank them by measures of economic vitality.

Economic growth is often lopsided though. While these cities saw jobs and wages increase, the rising tide doesn’t necessarily lift all ships. It’s a phenomenon Seattleites are acutely aware of as the growth of Amazon and others in the tech industry increased congestion and bidded up housing costs over the past decade.

“The top metros are enjoying impressive job and wage growth in aggregate, but many are also seeing housing prices rise sharply,” the Milken study says. “As a result, lower-wage residents are being forced to commute from neighboring metros, reducing their quality of life and limiting access to the opportunities being created in these vibrant tech hubs.”