Walmart today unveiled a new partnership with Google’s virtual assistant to let customers shop via voice command, the latest integration between the two companies as they both battle Amazon.

Under the partnership rolling out this month, customers will be able to say, “Hey Google, talk to Walmart” and add items to their virtual cart through voice command. Walmart will use historical shopping data to automatically identify the correct brand and size of an item, such as knowing whether customers drink 1 percent or skim milk.

Walmart is embroiled in an intense competition with Amazon to control the future of retail. And it has found some unlikely allies along the way in Amazon rivals Google (smart speakers) and Microsoft, which inked a cloud deal with Walmart last year. 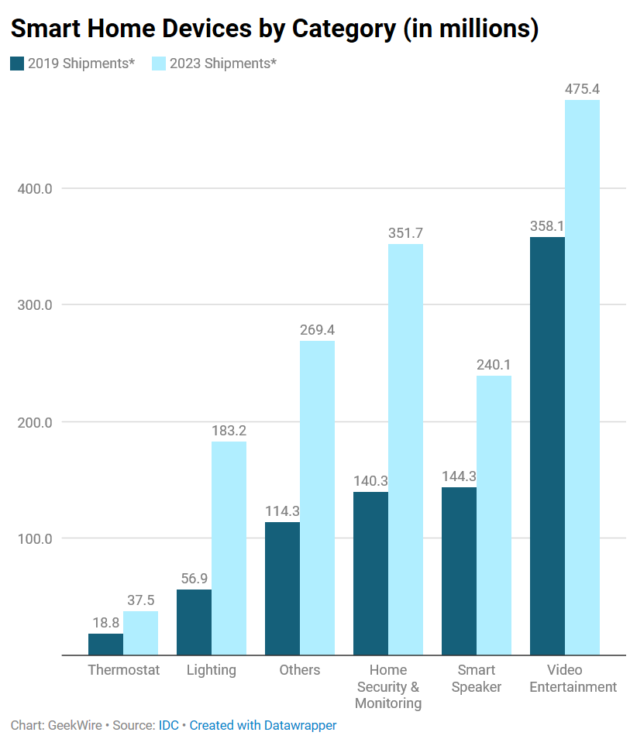 Amazon is the dominant player in cloud computing and it also leads the way in the competitive smart speaker market. A new report from International Data Corp. shows why smart home devices have become such an emphasis among big tech companies such as Amazon and Google.

IDC expects the global market for smart home devices to grow 27 percent in 2019 to 832.7 million shipments. Looking ahead to 2023, IDC expects shipments to skyrocket to 1.6 billion, with most users placing multiple devices in their homes.

Today, video and entertainment demand command 43 percent of the smart home market. That product type will continue to lead the way going forward, IDC predicts, but it will lose market share as home monitoring and security devices and smart speakers become more popular.

“One important trend to watch is how smart assistants become integrated throughout the home,” said Ramon T. Llamas, research director for IDC’s Consumer IoT Program. “Smart assistants will act as the point of contact with multiple smart home devices and essentially become the cornerstone of the smart home experience. Already we’ve been seeing that with smart speakers and this will eventually move on to appliances, thermostats, and all sorts of video entertainment.”