A 911 outage affected agencies across Washington state on Thursday and continued into the early hours of Friday, as people received emergency alerts on their smartphones late Thursday evening with alternatives to 911 phone numbers.

Update, Friday 8:40 a.m.: Some agencies, including the King County Sheriff”s Office, reported that 911 telephone services had recovered as of approximately 8:30 a.m. Friday morning. However, others are advising that service could still be intermittent.

#Update the King County Sheriffs Office communication center is up again and receiving 911 calls. Please only call 911 if you have an emergency but the system is working. https://t.co/GXsK9MXJgn

Update, Friday 10:10 a.m.: The Federal Communications Commision has initiated an investigation into the outage.

Update, Saturday 3:45 p.m.: The outage was reportedly caused by a bad networking card in Colorado.

People in Washington and parts of Oregon had tweeted about receiving the emergency alert on their smartphones just past 11:20 p.m. PT Thursday, including GeekWire reporters in Portland, Ore.

The alert, which listed an alternative emergency number, appears to be sent via the Wireless Emergency Alerts (WEA) system that launched in 2012 and warns the public about dangerous weather, missing children, and other situations. The WEA is different than President Trump’s new nationwide Emergency Alert System that was tested in October. 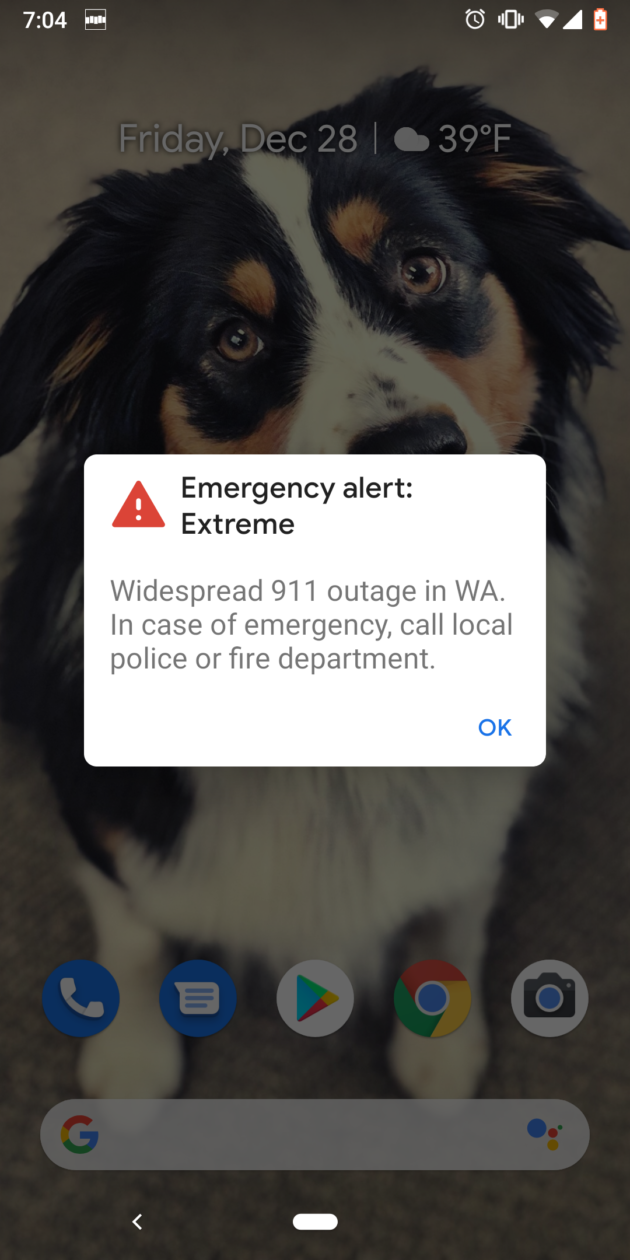 CenturyLink reported a nationwide disruption Thursday morning and later identified a “network element that was impacting customer services,” with a fix scheduled by 1 a.m. PT on Friday. It’s unclear if and how the CenturyLink problems were related to the 911 outage, but tweets from the Seattle Police Department and Clark County 911 Dispatch indicate they are connected.

If you are having difficulty connecting to the Seattle 911 Center, please call 206 583-2111, 206 625-5011 or text 911. City of Seattle technicians continue to work with @CenturyLink representatives to ensure our 911 service remains uninterrupted.

Century Link phone and internet services are experiencing outages throughout the country. If you have Century Link please use an alternative method to reach 911. #ClarkWa #VanWa

ATTN: All 911 lines are down statewide, landlines and cell phones. For emergency assistance during this time, call RiverCom's business line at 509-663-9911.

King County said that the outage was “caused by a malfunction at CenturyLink.” It also said the new text-to-911 service was available.

Here’s a look at Thursday’s CenturyLink outages across the U.S., according to downdetector.com:

This is a nationwide outage. The @FCC investigation needs to start now.https://t.co/e0z22x7FwX

CenturyLink was fined $2.9 million in 2016 by the Washington Utilities and Transportation Commission for failing to reroute emergency calls during an April 2014 outage that lasted six hours.

We’ve reached out to CenturyLink for more details and will update this story when we hear back.

Here’s a list of alternate emergency numbers to call for various areas of the state:

WASHINGTON: 9-1-1 outage affecting agencies across the state. If you have an emergency, use this list to reach emergency services. pic.twitter.com/nLaSfEkofZ