[Editor’s Note: This guest post is by Larry Arnstein, a former Impinj business and marketing executive who is now an entrepreneur in residence at the Intellectual Ventures Invention Science Fund.]

A tether or a battery? The growth of the Internet of Things (IoT) is limited by these two unsatisfying options. Have you ever wondered what provides power to all of those hotel room card key locks? It’s batteries that die and have to be changed. Most video surveillance systems are tethered, mobile phones use batteries, RFID readers are tethered, drones usage is limited by battery life, and so on. Why are smart thermostats and doorbells selling so well? It’s because the power supply is already there. Show me a source of power and I’ll show you a great IoT application.

Try to imagine what the world would be like without these constraints. Of course, we’d all love our phones to be fully charged all of the time, but wireless power has implications well beyond that. Imagine lightweight powerful lawn mowers and yard tools that just work; drones that could stay aloft indefinitely; industrial sensors that could be attached to anything, anywhere; or security systems that could be deployed quickly and easily. IoT devices would crop up everywhere, helping us in ways that we haven’t even thought of yet.

Show me a source of power and I’ll show you a great IoT application.

There are two ways to deliver power wirelessly in the market today: magnetic induction and electromagnetic waves. Magnetic induction is used in familiar consumer applications like electric toothbrushes, phone charging mats, cooktops, and even cars. The base unit of an electric toothbrush uses wall power to generate a rapidly changing or oscillating magnetic field that in turn causes current to flow in the battery charging system embedded in the toothbrush handle. The energy is being transferred over the air from the base to the handle by the magnetic field. WiTricity is commercializing a magnetic induction method to deliver thousands of Watts of power from a pad placed on the ground beneath an electric car. The fundamental limitation of magnetic induction is that the magnetic field does not travel very far. Anyone who has played with magnets has experienced how the attractive or repulsive force is hard to feel until the magnets get quite close to each other.

In contrast, electromagnetic waves, which include radio waves, microwaves, and light waves, travel much further. RAIN RFID is a less familiar but widely adopted technology for tracking inventory in stores and in the supply chain. RAIN RFID relies on radio waves to transfer power from a reader device to an item that can be up to 15 meters away. Figure 1 shows the power delivery capacity and range for a variety of commercially available wireless power offerings. Note the lack of high power long-range options. Only electromagnetic waves have the potential to fill this hole, but there are some real challenges to overcome. 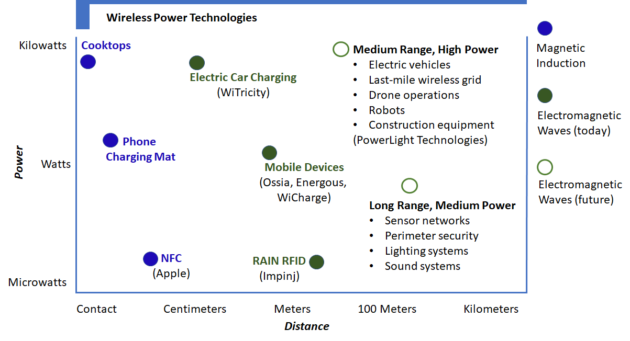 The main problem with electromagnetic waves is that they tend to spread out, which is good for a radio station that wants everyone to be able to receive their signal but not so good for delivering power to a specific location. KUOW in Seattle pushes 100,000 Watts of power into the air 24×7, but each listener’s radio only gets a tiny fraction of that power, and certainly not enough to do any useful work. For fans of numbers, 100,000 Watts distributed over a 40-mile radius delivers less than a millionth of a Watt per square foot. For comparison, your hair dryer probably consumes about 1500 Watts and a modern bright LED light bulb use only 14 Watts.

To deliver usable power to a device over the air, using electromagnetic waves, we have to concentrate the power. There are two ways to do it: with lasers and with focusing. Lasers produce light in which all of the waves are moving in the same direction. Whichever way you point the laser, that is where the energy goes. The waves do not diverge or spread out. Aside from some loss due to interaction with the air, all of the energy that leaves the transmitter ends up in the same place, presumably at the receiver. The other option is focusing. Using a lens or specially designed antenna, electromagnetic waves can be directed to converge at any desired location (the focal point) beyond which they diverge. If you have ever used a magnifying glass to burn a hole in a leaf, then you’ve experienced this phenomenon. Technology to focus electromagnetic waves on distant receivers in motion is an active area of development with many trade-offs between size, range, and efficiency. Success in those efforts will leave us with two other problems that could stand in the way of commercial-scale wireless power delivery: interference and safety.

When using electromagnetic waves for communication, everyone tries to use the least amount of power needed to get the message across. The less power everyone uses to communicate, the more communications can happen at the same time. On the other hand, wireless power delivery is for, well, delivering power. So the “least power possible” principle does not apply. Fortunately, unlike at a dinner party where everyone is speaking and listening in a fairly narrow range of frequencies making it difficult to have many simultaneous conversations, electromagnetic waves work across an extremely wide range. Receivers can tune out waves that are not of interest no matter how loud or strong those other waves happen to be, just like car radios. Long range, wireless power transfer can coexist with communication systems.

Safety is the final consideration. We are exposed to electromagnetic waves all the time, in the form of radio, visible light, and even microwaves from our Wi-Fi routers, and yes, our microwave ovens. There are well-known dangers associated with intense visible and especially near-visible UV light exposure. But, because of their lower energy levels, radio waves and microwaves do not cause the kind of damage that higher energy waves like UV, and x-rays can. However, radio waves and microwaves in high concentrations can cause indirect damage to tissues through warming where the waves are absorbed. Systems that can quickly detect and respond to obstructions between sender and receiver could make high power, long-range systems safe for widespread use.

The FCC is the government agency charged with regulating radio and microwave transmissions for interference and safety. The FDA is the agency responsible for regulating light exposure. Any company hoping to commercialize wireless power technology will have to satisfy one of these two agencies, which maintain stringent exposure limits. We can speculate about all of the amazing things people will do once they are freed from the shackles of big batteries or tethers, but we will still be surprised when we get there. Are the economic and quality-of-life benefits for advancing the Internet of Things into the world of wireless power compelling enough to drive the private investment and regulatory adaptation that is needed? Ask Energous, WiCharge, and Ossia all of which are making progress on product development and the regulatory compliance.