Can technology help? Waze thinks so.

The Google-owned company — best known for its crowdsourced real-time navigation app, used by 100 million people each month — is announcing the launch of Waze Carpool in Seattle and across Washington state today.

Waze Carpool helps users find, connect, and ride with each other to save time and money. The app, just updated this month, matches people based on commutes and personal preferences. Waze pays drivers $0.54 per mile — the maximum IRS mileage reimbursement rate, to avoid commercial tax and insurance requirements while keeping rates low for riders.

Waze joins a growing number of carpooling apps, including services from ride-hailing giants Uber and Lyft, that provide shared transportation options in the region. Waze, founded in Israel a decade ago, rolled out the carpool service across California, Texas, and Israel over the past two years. But today marks Waze Carpool’s first official statewide launch.

Why Washington for the launch?

“Why not Washington?” Waze CEO and co-founder Noam Bardin told GeekWire during a private event held by the company in Seattle on Monday evening.

The event included representatives of several key organizations, including the Washington Department of Transportation; the office of Gov. Jay Inslee; and the City of Kirkland, where Google employs more than 1,000 people.

“This is the first time we are approaching a state with a very aggressive municipal partnership plan, as well as talking to a bunch of employers,” said Josh Fried, head of Waze Carpool. If Waze sees traction in Washington, he said, “you could see pretty rapid expansion from us going forward.”

There is plenty of opportunity for improvement in the Seattle region, which ranks ninth among U.S. cities for time spent stuck in traffic, at 55 hours per year, according to the most recent INRIX Global Traffic Scorecard. Ten percent of Seattleites carpool to work, said Jonathan Hopkins, executive director of Commute Seattle. 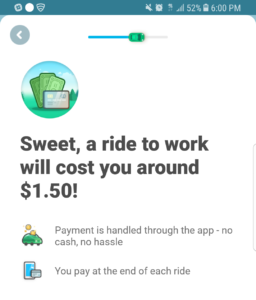 “There’s too many cars and not enough roads,” Bardin said. “Traffic is getting worse and worse. You look at the numbers and it is shocking.”

On the other hand, Bardin pointed to the impact of HOV lanes in the Seattle area, which has nearly 400,000 Waze users. “There is a very dramatic difference in using HOV versus single occupancy lanes,” he said, referring to travel time. “That’s not true in every state.”

The company said the app is not just for people who live and work in Seattle, but also for those traveling longer distances.

“If you think about Amazon, it’s not about the engineer,” Bardin said. “It’s about the person working at the warehouse. That’s where I think we can make the biggest impact.”

“We don’t want to play in that space,” Bardin said. “My dream was never to run a taxi company.”

Another competitor is Scoop, which launched in Seattle one year ago and offers a similar carpooling service geared toward employees. Waze also focuses on employees and works with companies like Symantec, Intuit, Synopsys, and Google itself on transportation solutions.

But are people in this city — known for the infamous “Seattle Freeze” — willing to get cozy with a few folks going in the same direction? That remains to be seen.

“If you think about 10 years ago and someone saying that you’re going to sleep in some random stranger’s house, you would have thought they were crazy,” Bardin said, alluding to the perception of sharing economy companies like Airbnb.

With Google on its side and 15.5 billion miles logged on its app each month, Waze has some advantages.

“There are other apps out there but they don’t have the power of Waze,” Fried said. “We have a leg up in terms of technology.”

Another differentiator could be cost. For example, a ride from downtown Seattle to downtown Tacoma on Monday morning runs around $7 on Waze. The same trip would cost more than $50 on Uber Pool.

Unlike Uber or Lyft, Waze does not perform background checks on drivers. It provides detailed information on each user and lets riders choose if they want to only ride with colleagues or a certain gender.

“You get to do a tremendous amount of vetting,” Fried said. “At any point in time, if it’s not right for you, you can find another partner. It’s really up to you at every step of the way to make that carpool happen.”

Google acquired Waze for $1.15 billion in 2014. The company has operated as a standalone business. Bardin said Waze eventually plans on monetizing by taking a cut of each transaction.

Google has a long history with both Uber and Lyft. It was an early investor in Uber, but became embroiled in a high-profile lawsuit involving self-driving technology that ended in February. Google parent Alphabet, via investing arm CapitalG, just led a $1 billion round in Lyft this past October.