You can purchase a wide variety of office furniture on Amazon.com, including modern standing desks and computer work stations. But if you want to work like an actual employee of the e-commerce giant, you’ll want to take a seat at a door desk.

The quirky, cost-effective solution to having a place to set your laptop has long been a symbol of the culture which made Amazon what it is today.

In 1995, founder and CEO Jeff Bezos came up with the idea to use a solid-core door as a desktop, with four 4x4s as the legs. More than 20 years later, the door desks are still an office staple for employees worldwide.

A new post on the company’s official blog provides a bit more of the backstory. Nico Lovejoy was employee number five at Amazon — which now employs more than 500,000. He said the desk just became emblematic of the company’s scrappy nature when Bezos headed into Home Depot looking for cheap furniture.

And he offered a critique of his boss’ carpentry skills, too.

“I went out and replaced the hardware on the desks Bezos built,” Lovejoy said. “You would never want to hire Jeff Bezos as a carpenter. He’s much better at other things. I think he’d tell you the same thing.”

Amazon has also offered up a new how-to post for anyone who wants to tap into the frugality and “be peculiar” in their own workplace or home office.

From assembling the materials to standing the desk upright, a door desk can be created in just six steps.

Now get to work and see if it helps you reimagine everything from retail to artificial intelligence to robotics to cloud computing. 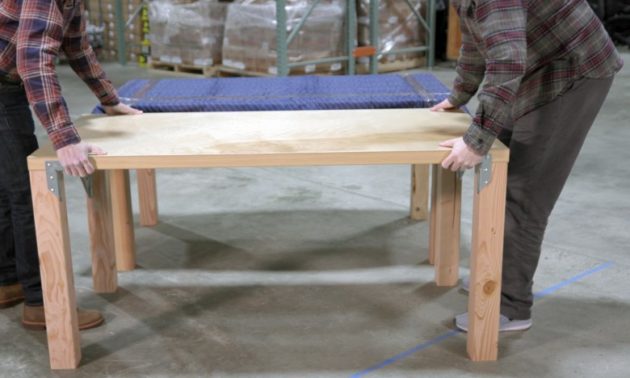