A row of 10 nearly complete tiny homes awaits paint, curtains, and other trimmings from Vulcan’s less construction-savvy employees. Behind them are “kits” with windows, walls, and other materials pre-cut and ready to be assembled. The final row of CenturyLink Field Events Center is filled with raw materials for Vulcan’s most confident carpenters. This is the inaugural Vulcan Converge, an event where Seattle tech workers and volunteers are building homes that will become a new tiny house village in the Central District.

It takes a village to build a village.

“It takes a village to build a village,” said Pearl Leung, Vulcan’s external affairs director over the sound of sawing. Leung gave GeekWire an advance tour of the build site as volunteers prepared materials for Friday.

Vulcan partnered with the Low Income Housing Institute (LIHI), Associated General Contractors of Washington, and the City of Seattle on the project. It is one of Seattle’s largest tiny home builds to date. In addition to employees’ time, Vulcan is contributing $75,000 to the effort. Each tiny home costs $2,500-$3,000 in materials, according to Vulcan CEO Bill Hilf.

Hilf stressed the importance of having the “adult supervision” of experienced carpenters and construction workers in an interview with GeekWire.

“We’re not a company composed entirely of construction expertise,” he said. “We have elephant scientists and rocket engineers and computer programmers and stock traders.”

The wide-ranging expertise of Vulcan employees reflects the diverse interests of the company’s founder. The Microsoft co-founder established Vulcan 30 years ago to oversee his various businesses and philanthropic work, from the Seattle Seahawks to elephant conservation.

Seattle’s growing homeless population, the third largest in the nation, is another issue that Vulcan has been working on for years. Allen’s foundation donated $30 million to create a new permanent housing and resource center for people experiencing homelessness, which will break ground this summer according to Hilf. Allen also donated $1 million to a separate housing village for the homeless in Seattle’s Columbia City neighborhood in 2016.

Vulcan has a history of working with the City of Seattle on homelessness initiatives but the two aren’t always aligned when it comes to tackling this difficult problem. This month, Vulcan donated $25,000 to a referendum campaign seeking to overturn Seattle’s controversial new head tax. The City Council passed legislation that requires businesses with more than $20 million in annual revenue to pay about $275 per full-time employee each year. The city will use the funds for affordable housing and homeless services.

“Even before the tax on jobs or the referendum on the tax on jobs, long before that, Paul Allen and Vulcan have been focusing on homelessness here for many years,” Hilf said. “This isn’t a new issue for us. I think there needs to be a lot more alignment from the business community and the city to come together on how to solve this.”

Hilf, like many in the tech industry, believes the head tax takes the wrong approach to addressing the city’s housing crisis. There is disagreement over the root causes of homelessness; rising housing costs associated with rapid job growth high-paying industries, like tech, is one factor. The high proportion of property zoned for single-family homes in Seattle is another. But the City Council believes that the first priority should be building more affordable housing and says the head tax is necessary to fund that effort.

“We know that some of the largest corporations in our community have prospered right here on the workers that can no longer afford to live here,” Councilmember Teresa Mosqueda told GeekWire earlier this month. “We will all do better — the workers and the large businesses — if folks can afford to stay here and if folks get off the street.” 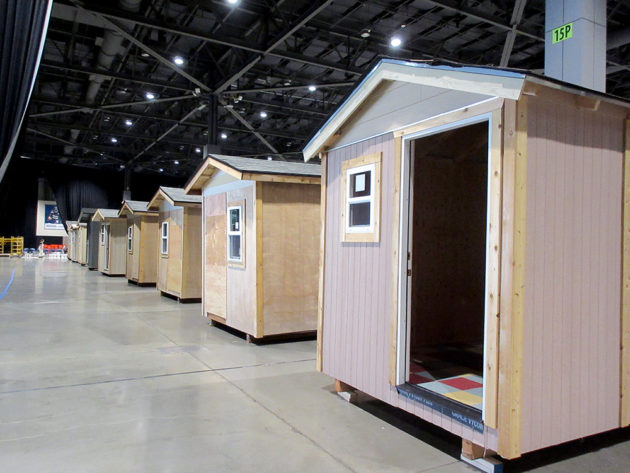 When the build is finished, Vulcan will transport the 30 tiny homes to a new village site at 1714 E. Yesler Way in Seattle’s Central District. It will become LIHI’s ninth tiny house village in Seattle. The Yesler Tiny House Village is intended to shelter about 60 people. It will have shared kitchen, laundry, and restroom facilities, plus a counseling center.

At the heart of the project is Lawrence Willis, a pastor who also does outreach and retention for the Seattle Vocational Institute’s Pre-Apprenticeship Construction Training Program and sits on the board of LIHI. Willis and a group of his students were working to prepare materials Thursday in advance of the Vulcan build.

Willis said that each quarter, there are several housing insecure students in the construction apprenticeship program. Some of the students working on the build this week will move into tiny homes in the Yesler village, according to Willis. His goal is to keep students in the program so that they can learn skills that provide a route to income and stable housing.

“Especially in this economy, construction is booming and not only that, they’re learning a skill that they’ll never lose,” Willis said.

The Yesler Tiny House Village aligns with Seattle Mayor Jenny Durkan’s vision for “bridge housing,” secure, temporary shelter designed to help people transition from living on the street to permanent homes. It’s one piece of the larger, complex problem that is homelessness. Whether the city should prioritize temporary shelter or permanent housing is a hotly debated issue in Seattle.

Hilf acknowledges that the Vulcan build “isn’t the solution to the homelessness problems by any stretch” but rather an effort to engage employees and make incremental progress.

“As of Thursday night, there’s going to be people living on the street or in cars,” he said. “Can we give 30 or more of those people a place that has heat and a roof over their head? That will be the goal.”